The real story of how Taj Mahal was built

When Mumtaz Mahal died, a decision was taken to bury her in Akbarabad as Agra was known at that time.

In the 17th century, the Mughals and their grandeur had seized European imagination, with many travellers coming to visit India.

In John Milton’s "Paradise Lost", the city of Agra is shown to Adam, after his fall, as a future wonder of the world.

With the Mughal obsession for gardens and majestic buildings, it is no wonder that their cities seemed wonderful.

Agra itself had been developed into a riverfront garden city, with all the important and famous nobles having huge riverfront gardens and mansions. In her book, The Complete Taj Mahal, Ebba Koch names them along with a map. Some of the nobles who had mansions on the riverfront along the side of the Agra Fort were Mahabat Khan, Asaf Khan, Muqim Khan, Dara Shukoh and Man Singh.

When Mumtaz Mahal died and it was decided to bury her in Akbarabad, as Agra was known then, a search for the best place to build her mausoleum was undertaken. Her grieving husband had already decided to make her resting place a veritable paradise itself. A majestic and huge tomb was to be constructed. Since the structure would be very heavy, the architects took the decision to support it on large wooden slabs built over deep wells. This stabilised the sand and acted as augered piles. For this purpose, the position chosen was at a node in the River Yamuna, which seemed the most suitable. This plot of land belonged to Raja Man Singh, Akbar’s general who had marriage ties with the Mughals. 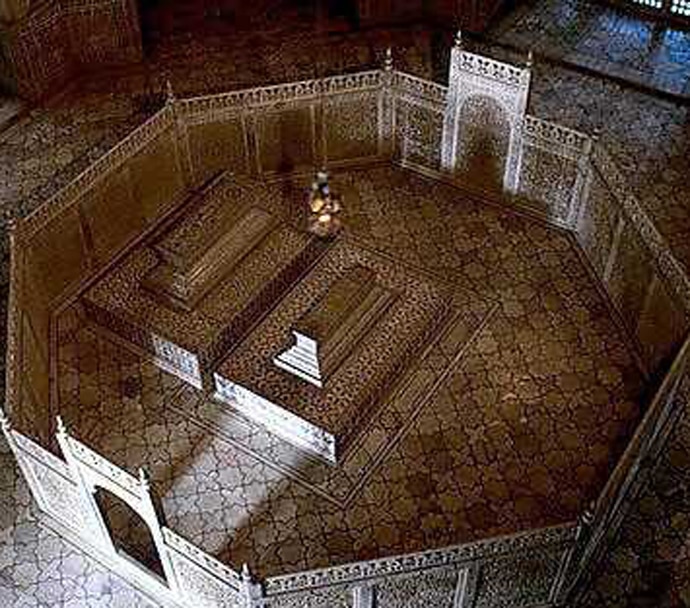 Tomb of Mumtaz Mahal in the Taj Mahal, alongside her husband Shah Jahan. (Credit: Wikimedia Commons)

Though Shah Jahan or Raja Jai Singh would not have anticipated a day when the property deeds of the Taj Mahal would be checked, thankfully, as the Mughals administration was very bureaucratic, thousands of documents were generated and preserved. Though many have been lost over the years, some still remain.

Given their fondness for recording their deeds and history, some of the Mughal emperors like Babur and Jahangir wrote their own memoirs, and others got official histories written by their court historians. Apart from these, many more contemporary accounts were written, which record every detail of the period. During the reign of Shah Jahan, too, many court histories were written. These were the Padshah Nama of Qazwini, The Padshah Nama of Abdul Hamid Lahori and Muhammad Waris, the Shah Jahan Nama of Muhammad Salih Kanbo.

These contemporary accounts form an important source of information regarding Shah Jahan’s reign, administration, conquests, and his buildings. Many later texts emerged in the 19th and 20th century which carried hearsay accounts, and can not be considered factual unless borne out by the ones written during Shah Jahan’s reign or immediately after.

The contemporary texts refer to the mausoleum that was built by him for his beloved wife Mumtaz Mahal as Rauza e Munnavara, or the Illuminated Tomb.

Taj Mahal: The Illumined Tomb by WE Begley and ZA Desai has compiled an anthology of these sources, and it was from this book that I realised how well-documented the building of the mausoleum was. I use these translations to present my arguments that the Taj Mahal was built on the land where Raja Jai Singh had a mansion and that there is no mention of any religious building on that land.

These historians mention that though Raja Jai Singh wanted to give it for free for the noble purpose, the emperor was unwilling, and gave another mansion loftier than the one he had acquired in lieu thereof.

Two books give details and a translation of the royal "farman" giving four "havelis" in lieu of Raja Jai Singh’s haveli. Yes, the word mentioned is "haveli", or mansion.

Qazwini describes the tract of land on the southern side of Agra that had the qualities needed to be the final resting place of the one whose residence was paradise. Qazwini says it was formerly the word "khana", or house of Raja Jai Singh.

He also mentions that though the Raja was willing to give it for free, Shah Jahan gave him a lofty house in lieu of it.

Lahori also describes a tract of land south of the city as being suitable for the queen’s resting place, and uses the word "manzil" or mansion of Raja Jai Singh. He also mentions the fact that though Raja Jai Singh was willing to give it for free, Shah Jahan gave a lofty mansion from the crown lands in exchange.

Muhammad Salih Kanbo writes that the emperor acquired a "heaven-like tract of land (sarzamin e bihist-ain)" which was situated on the south side of Agra and belonged to Raja Man Singh. Once again, the word manzil is used.

I found details and translation of the "farman" giving orders for the exchange to Raja Jai Singh in two books. One is Mughal Documents by prof SAI Tirmizi and the other is Begley and Desai’s Taj Mahal: The Illumined Tomb.

While prof Tirmizi gives the bare details, Begley and Desai have translated the "farman" in its entirety and have given all the details of endorsements and scrutiny that were given on the back, which were necessary before it could be admitted in the royal office.

Though the mansion was gifted immediately after the decision to bury Mumtaz Mahal in Agra was taken in 1631, the exchange of the additional/replacement four "havelis" took two years to affect, as the royal "farman" is dated December 28, 1633.

A certified contemporary copy of the "farman" dated 26 Jumada II 1043 AH, sixth regnal year [corresponding to December 28, 1633], is available in the Kapad Dwara collection in Jaipur City palace. The word used in the "farman" too is "haveli" (mansion).

“Be it known through this glorious farman marked by happiness, which has received the honor of issuance and the dignity of proclamation, that the mansions (haveli) detailed in the endorsement, together with their dependencies, which belong to the august crown property, have been offered to that pride of peers and vassal of the monarch of Islam, Raja Jai Singh, and are hereby handed over and transferred to his ownership- in exchange of the mansion (haveli) formerly belonging to Raja Man Singh, which that pride of the grandees willingly and voluntarily donated for the mausoleum of that Queen of the ladies of the world ….. Mumtaz Mahal Begum.” [Translation Begley and Desai]

There are other royal "farmans" addressed to Raja Jai Singh which deal with sending of marble from Makrana mines which were part of Raja Jai Singh’s estates.

Also read: The Taj Mahal we don't know about

Post your comment
#Man Singh, #Mumtaz Mahal, #Shah Jahan, #Taj Mahal
The views and opinions expressed in this article are those of the authors and do not necessarily reflect the official policy or position of DailyO.in or the India Today Group. The writers are solely responsible for any claims arising out of the contents of this article.