Can Supreme Court give the final word on Taj Mahal?

With 20 years of litigations having proved nothing, the court should put a blanket ban on filing yet another futile case.

On the night of June 16, 1631, when Mumtaz Mahal started to sink, it is said, she asked her husband to build a tomb - such as the world had never seen - in her memory and not to marry again. Emperor Shah Jahan, who sat holding her hand, agreed to both.

He locked himself in his chambers for seven days. His beard and moustache turned "one third white". His eyesight was irreparably damaged from weeping. He did not use his favourite ittar ever again. And he immersed himself into the dream of a mausoleum.

For a man who commanded 25 per cent of the global GDP, it had to be the best dream of them all. He spent days and nights brainstorming with the best of architects - Muslim, Hindu and also European - show Mughal records, until the mausoleum was completed 22 years later.

It was not called Taj Mahal, but Rauzah-i-Mumtaz, "rauzah" being a garden-tomb in Persian. East India Company traders, who couldn't pronounce the original, turned it into an abbreviation of the empress' name: Taj Mahal.

That bit of history is on record. But how Taj Mahal became Tej-o-Mahalaya, a Shiva temple on which Shah Jahan apparently built the mausoleum, is not on record. For the last two decades, however, cases have been filed in various courts repeatedly, seeking to declare the Taj a Hindu temple. 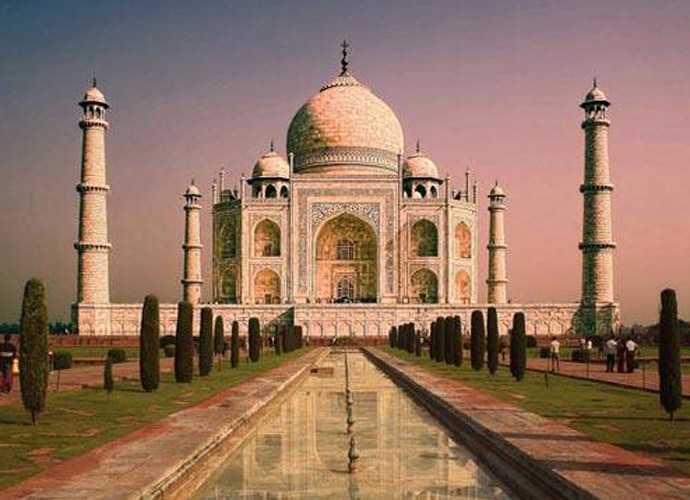 For the last two decades, cases have been filed in various courts repeatedly, seeking to declare the Taj a Hindu temple.

The latest spate of cases was in 2015, when several Agra lawyers moved the district court, not just to declare the 17th century Mughal monument a Shiva temple or seek permission for puja, open up the basement of the Taj and search all rooms for evidence of its Hindu origin.

They made "Lord Agreshwar Mahadev" the main plaintiff and declared themselves to be the "next friend" of the deity.

The Supreme Court of India had dismissed such petitions way back in 2000, with the order that no matters pertaining to the Taj could be heard at the local or high court level. Yet, the Agra Civil Court admitted the petition. It then issued a series of notices to the union home secretary, the union ministry of culture and the Archaeological Survey of India, asking them to respond.

Taj in the court

2017 has turned out to be a definitive year for the Taj. The Supreme Court is hearing a raft of cases on the Taj. One such is from the government of India, seeking the court's nod to fell 450 trees around it in order to build railway tracks between Mathura and Delhi.

An astonishing plea, when even a cursory glance shows that the monument is turning yellow, with murky brown and black blotches appearing on its once-pristine facade, thanks to pollution.

A Supreme Court bench of justices Madan B Lokur and Deepak Gupta has made precisely that point: "This is a world-famous monument. Do you (government) want to destroy it? Have you seen the recent pictures of the Taj? Go to the internet and have a look at it."

The other case is the one on Taj ownership. On the basis of available records, the counsels for the union of India and Archeological Survey of India have argued that the petitioners have no locus standi in the matter, that the mausoleum was constructed by emperor Shah

Jahan, that there is no evidence of any temple within, and, no, the petitioners do not have any right to perform puja there: it's a Muslim tomb. Requesting the Supreme Court to dismiss the petition, they have called the claims of petitioners "concocted" and "absurd".

What a colossal wastage of time. Twenty years of litigation and nothing proved. Wasting judicial time is a great crime in India - a country that has just 13 judges per one million people, over 6,000 judicial posts unfilled and more than 3 crore cases pending.

Can the Supreme Court please give the final word on the Taj? Can it also put a blanket ban on filing yet another futile case on the Taj, and issue a fine, perhaps — just as it now punishes people filing "frivolous" public interest litigations — on those who cannot prove their point but waste judicial time?

Every Indian is proud of the Taj Mahal - as it is. It is India's only "wonder of the world", a universally admired masterpiece, a world heritage. Let's just take a pledge not to mess with the Taj anymore.

#Shah Jahan, #Supreme Court, #Taj Mahal
The views and opinions expressed in this article are those of the authors and do not necessarily reflect the official policy or position of DailyO.in or the India Today Group. The writers are solely responsible for any claims arising out of the contents of this article.