As Yogi Adityanath wielded the broom outside the Taj Mahal on October 26, smiling enigmatically, a whole lot of unanswered questions hung about, a bit like the smog and stench that surround India’s one and only “wonder of the world”.

First: why did the Uttar Pradesh chief minister need to make such a spectacle of his first visit (as CM) to the Taj? After all, he is (arguably) the first Indian to claim (publicly) that the Taj does not represent Indian heritage. And his government can’t even be bothered to include it in the state tourism brochure, Apaar Sambhavnaye.

Second: how serious is Yogi about restoring Taj Mahal’s glory? Taj Mahal has been turning yellow for a while, but now patches of greenish black pigmentation is appearing on the white marble. Cracks are appearing. The minarets are showing signs of tilting. The wooden foundation has become brittle. Stones and materials are falling off. Chandeliers are crashing. Rabindranath Tagore’s “eternal teardrop” may collapse if not repaired on war-footing. Does he really care? 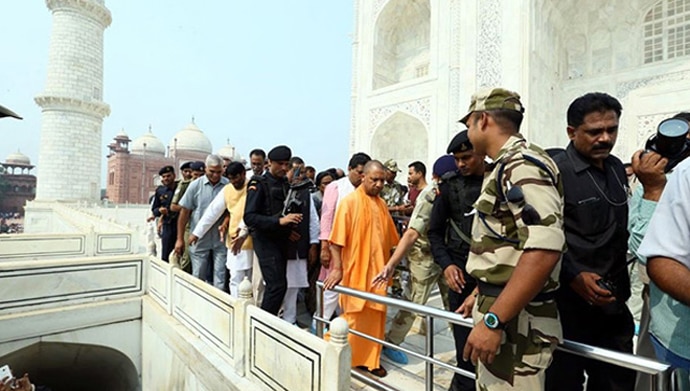 It’s his atonement, "prayashchit yatra", says Communist Party of India leader, Atul Anjan. Yogi had once told a tv channel that if his party came to power he would change the name of Taj Mahal, Anjan points out. He is now on a “course correction”.

It’s just the cold hard calculation of electoral politics, say others. With identity politics emerging as the dominant theme of Lok Sabha 2019, Yogi has become “inclusive”: planning mass wedding of poor minority girls; giving land to the Maulana Azad National Urdu University; speaking at the Taleem-O-Tarbiat, to spread the need for education among minorities.

The buzz is: it’s the Prime Minister’s Office at work. Yogi is being pressurised by the PMO to call the Taj the “pride of India”, to include the Taj quickly in his government’s 2018 calendar, to plan a trip to the Taj and clean all cobwebs of misunderstanding with his broom, to tell the press that there’s no need to go into who built Taj and why, to make all the other promises: tourist pathways to helipads to international airport to the whopping Rs 370 crore development fund for Agra.

According to a new study by IIT-Kanpur scientists, high levels of pollutants in the air (black and brown carbon) and dust, generated from heavy traffic, smoke and soot of nearby crematoriums and factories, open burning of municipal solid waste are ruining the Taj Mahal marble. Are these part of Yogi’s Swachchhata Abhiyan? 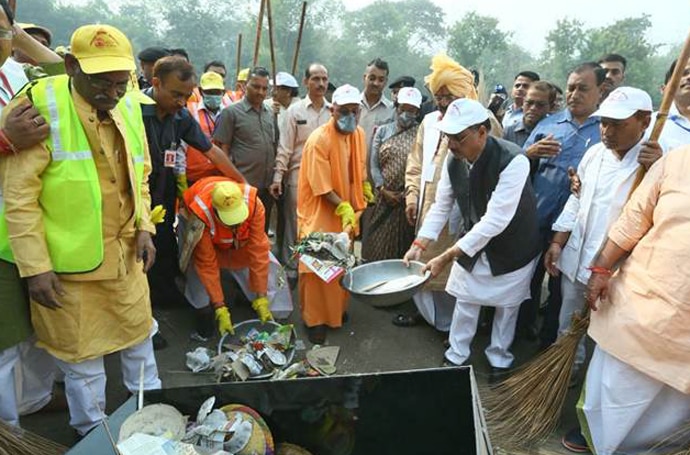 Plastic bottles, newspapers, clothes, and food are burnt out in the open, leading to a thick blanket of toxic smog over Agra, some of which find their way to the Taj. Will Yogi haul up the bureaucrats for allowing this?

Illegal construction of hotels, resorts and felling of trees go on continuously in the ecologically sensitive zone near the Taj. And are routinely ignored by the Agra Development Authority, even if complaints are lodged. Will the CM take those crucial steps to stop the toxic nexus?

A raft of cases is going on at the Supreme Court and the National Green Tribunal involving the Taj. One of these is by the government of India, seeking permission from the Supreme Court to fell 450 trees around the Taj for building railway tracks. The other is a PIL against the UP government, for destroying aesthetics by constructing around the Taj. Will Yogi look into these?

The clean Yamuna project started in 2012 by the Agra district authorities, fearing Supreme Court action. Clearly, the fear was not enough to keep them going. After NDA came to power, Union minister Nitin Gadkari promised that Yamuna would be dredged and cleaned, with a ferry service launched between Delhi and Agra. Yet another forgotten promise. But will the CM turn his attention to Yamuna now?

River Yamuna is in dire straits. As many as 62 out of 90 drains pollute the river. Stagnant with municipal dumping and industrial wastes, the river is the breeding ground of bugs, called goeldichironomus. Swarms of these now infest the marble walls, turning those green, according to researchers of School of Entymology, St John’s College, Agra.

What’s more, with many large businesses and companies drawing from the Yamuna, the water level is coming down by five feet every year. Without Yamuna, Taj won’t survive. It’s wooden foundation is under the water and its drying up.

On a treasure trove

The fifth Mughal emperor, Shah Jahan, had spent over Rs 35 crore to build the Taj. Yogi is famously spending about the same amount on his farm loan waiver scheme. Yogi’s project, however, has put a big squeeze on public spending in UP, as analysed by SBI chief economist, Saumya Kanti Ghosh. But even after 364 years, Shah Jahan’s dream project is generating more than twice as much revenue than any of India’s 119 ticketed monuments. It’s the most visited, earns about Rs 20-25 crore a year and takes care of its own yearly expenses. What does it get back in return? A piddly Rs 3 crore-Rs 4 crore a year for upkeep and nothing for crucial one-time restoration and conservation.

Does the CM even realise the economic potential of the Mughal monument he is sitting on?

Consider the Eiffel Tower in Paris. Built in 1889, it was once condemned as a pointless monstrosity by a whole lot of French intellectuals. But it’s now the most valuable monument in Europe, contributing to a fifth of annual French GDP. It is managed by a semi-public company on a business model that includes shops, museums, snack bars, gourmet restaurants and experiential entertainment: transparent flooring to glass walkways, salons for business events to light shows, boat cruise to planned private tours. It’s “economic attractiveness index” also includes the number of jobs it creates.

Imagine boat rides around a pristine, white Taj. Or picnics on the manicured lawns? Or the Taj all lit up at night? No. That’s not likely to happen in India. We have forgotten how to enjoy the beauty or memory of our vast artistic and cultural inheritance. We don’t even know how to make the money we should out of what we possess.

We just know how to ruin everything with talk that takes us nowhere and action that means nothing.