How Trump handed over Afghanistan to the Taliban

Donald Trump admitted publicly that the Taliban could well take over power in Afghanistan, arguing that the United States cannot be there for another 20 years.

US President Donald Trump has admitted publicly that the Taliban could well take over power in Afghanistan, arguing that the United States cannot be there for another 20 years.

The US “can only hold someone’s hand for so long,” Trump said adding that eventually the Afghan people will have to protect themselves. This stark disavowal of any responsibility for Afghanistan’s future exposes the cosmetic nature of the agreement with the Taliban.

This brutal acknowledgement of the unfolding reality in Afghanistan comes after the Taliban, on the heels of its agreement with the US, attacked 43 checkposts of the Afghan National Defence and Security Forces (ANDSF) in the Helmand area on March 3 that killed 25 Afghan soldiers. Retaliatory US airstrikes took place on March 4 that were preceded by a bizarre telephone call between Trump and Mullah Baradar (who leads a terrorist group and is not head of state or government). On March 6, a murderous terrorist attack claimed by the Islamic State in Kabul killed 27 people and wounded another 81. 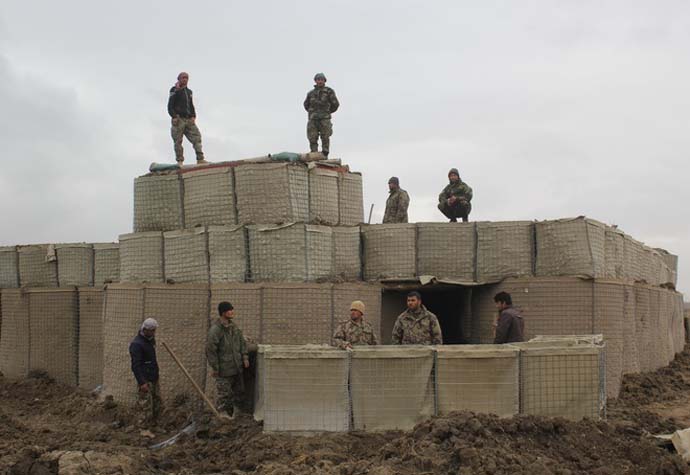 Soldiers at a checkpost in Kunduz, Afghanistan. (Photo: Reuters)

By this agreement, Trump has made it plain that he does not intend to uphold any of the declared tenets of US foreign policy, be it the combat against religious extremism and terrorism, defence of human rights, promotion of democracy, commitment to gender equality, and so on.

In these negotiations, America’s hand has been weak, having already acknowledged that a military solution to the Afghanistan conflict was not possible, and pressure on Trump, before the presidential election in November, to deliver on his campaign promise to bring the US troops back home.

The US is not going to recommit itself to Afghanistan no matter what happens ahead, and Trump has affirmed this rather casually. The clause in the February  29 US-Afghan government Joint Declaration that the US will seek funds annually to support the training, equipping, advising and sustaining of Afghan security forces seems to be a paper exercise because once the US withdraws, Afghanistan will lose strategic value and the commitment to maintain financial support for an Afghan government with the Taliban in it would make little sense. The stark disavowal of any responsibility for Afghanistan’s future by the US President Donald Trump exposes the cosmetic nature of the agreement with the Taliban. (Photo: Reuters)

The US has effectively capitulated to the Taliban. It has bypassed the legitimate government in Kabul. Worse, it has signed an agreement with the Islamic Emirate of Afghanistan (IEA); the caveat in it that the US does not recognise the IEA is just a verbal coverup. Under the agreement, after a timebound initial reduction, all US and allied troops will be out in 14 months, including “non-diplomatic civilian personnel, private security contractors, trainers, advisors, and supporting services personnel”. This implies no retention of bases or residual forces to prevent a full Taliban takeover.

No mention of terror

The Taliban, according to the agreement, will not allow its “members, other individuals or groups, including Al Qaeda, to use the soil of Afghanistan to threaten the security of the United States and its allies”. The Islamic State is omitted, though it is mentioned in the US-Afghan Joint Declaration. Groups like Lashkar-e-Taiba and Jaishe-Mohammed which are UN-designated terrorist organisations are also left out, which leaves India exposed. India-US strengthened counter-terrorism cooperation has meaning essentially in the Pakistan-Afghanistan context, which is why omitting any reference to Taliban’s regional responsibility to not permit violence emanating from its soil is a serious lacuna. The uncertain future of Afghanistan is a problem for India. Pakistan, which has assisted in bringing the Taliban to the negotiating table, has obtained a political role in Afghanistan through the Taliban which it will use to control developments there, including with regard to India’s presence and future role.

India has been right in not engaging with the Taliban. It was and is under compulsion to legitimise the takeover of Afghanistan by a radical Islamic force and indirectly promote Pakistan’s geopolitical ambitions.

The Taliban have to make the first move openly to reach out to India, as that would indicate how much they are thinking nationally and want to resist Pakistan’s hold over them. It was the right move to send our Foreign Secretary to Kabul as the US-Taliban agreement was signed to mark our support for  an “independent, sovereign, democratic, pluralistic, and inclusive” Afghanistan, and for an “enduring and inclusive” peace and reconciliation that is “Afghan-led, Afghan-owned and Afghan-controlled”. He also rightly referred to an “end to externally sponsored terrorism”.

Prospect of a civil conflict if the Taliban seeks a complete takeover as can be expected, the group’s expected reticence towards India and leaning towards Pakistan, not the least because of religious affinity, and Iran’s ambiguity are bound to cast a shadow on the Chabahar project’s salience This project had strategic meaning in the context of an independent Afghanistan seeking a strong relationship with India and a loosening of Pakistan’s geographical grip over it. A Taliban-dominated Afghanistan would have reduced stakes in this project. Iranian Supreme leader Khamenei’s highly offensive religious outburst against India over the Delhi riots calls into question the quality of India-Iran ties and the robustness of Chabahar project looking ahead.

Also read:  How America is hastily exiting Afghanistan, leaving it to the the Taliban, China and Pakistan