May 23 will be a decisive day for Tamil Nadu politics. The day will not just decide who forms the next government of India but would also seal the fate of the Edappadi Palaniswami (EPS) government that is surviving on a wafer-thin majority in the state.

The AIADMK government has a wafer-thin majority in the Tamil Nadu assembly currently. (Source: PTI)

By-elections to 18 out of 21 vacant Assembly seats will be held simultaneously with the Lok Sabha polls in the state on April 18. The mini Assembly elections will be a litmus test for the EPS administration and would determine its longevity.

With just over a month to go for polling, there is a sense of unease in Tamil Nadu. The state’s residents have been robbed of their democratic right in many spheres.

Over 1.19 lakh wards remain unrepresented at the municipality level because the local body polls in the state have been delayed for about two years now. Elections to the much civic polls are caught in a legal tangle and were put off indefinitely in December 2016. Added to this is the absence of elected representatives in 21 Assembly seats that fell vacant due to the disqualification of the legislators owing allegiance to rebel leader TTV Dhinakaran.

Every time there is a political upheaval, speculations are rife over survival of the government. However, the EPS administration stayed put weathering many a storm since it assumed office in February 2017.

For EPS and company, by-elections to the 18 constituencies hold the key to power. The the party has managed to ensure unconditional support of its allies – the BJP, PMK and DMDK for the by-polls.

If one is to go by the performance of the BJP, PMK and DMDK in the 2016 Assembly polls, the allies could tilt the scales in favour of the AIADMK in at least seven seats.

The 18 constituencies where by-polls would be held are spread across the state. Seven constituencies fall in the south, nine in north and two in central Tamil Nadu. In 2016, the AIADMK won 17 of these constituencies, while the DMK won one.

The PMK recorded a decisive margin in most of the constituencies in north Tamil Nadu which is dominated by the Vanniyar community to which its leader S Ramadoss belongs. The votes secured by PMK were higher than the margin between the winner and the runner-up.

The total number of seats in Tamil Nadu Assembly is 234. While there are 21 vacancies, the Election Commissions has announced by-polls only on 18.

The EC has cited pending court cases as the reason for not holding by-polls to Ottapidaram, Aravakurichi and Thiruparankundram seats.

The ruling AIADMK led by EPS currently has 114 MLAs and needs to win just two out of the 18 constituencies to reach the halfway mark of 116.

DMK, the principal opposition party is peeved with the Election Commission for not holding by-polls to the three other constituencies. The party alleged there is an ulterior motive behind the EC’s decision to withhold the by-polls.

The DMK finds itself in a precarious situation as even if the party wins all the 18 seats it will not be in a position to form the government. The DMK-Congress combine has 98 MLAs following the demise of DMK president M Karunanidhi. The party needs to win at least 20 seats to wrest power from the AIADMK.

With a multi-cornered contest, a minor swing of votes can change the results drastically. While AIADMK fights against anti-incumbency, it's a do or die battle for TTV Dhinakaran and MK Stalin to prove their political relevance. 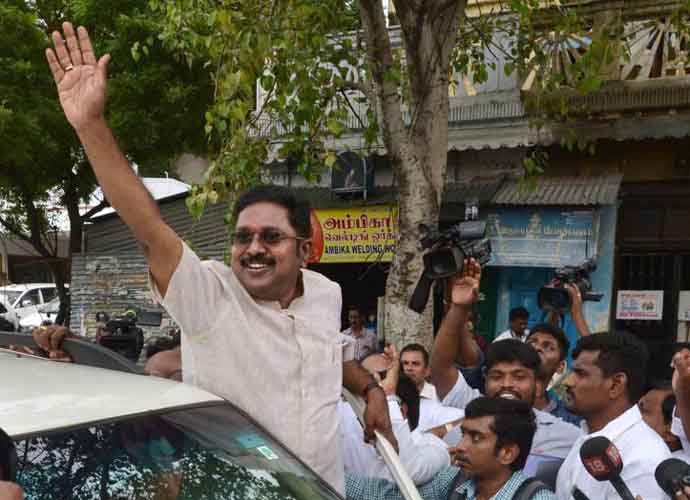 The DMK is hoping to cash in on the split in the AIADMK vote base. The party hopes its Gram Sabha meetings held in 12,000 panchayats falling under the 39 Lok Sabha and 21 Assembly constituencies for a period of one and half months will hold it in good stead.

The political exercise gauged the issues of the voters and assessed the party’s strength in the areas.

With eight of the 18 constituencies falling in southern Tamil Nadu, known to be the fiefdom of AIADMK, the DMK would tread carefully to revive its fortunes.

A victory in the by-polls will be a political reckoning for TTV Dhinakaran who is fighting to wrest control of the AIADMK from the present leadership. He will be hoping to repeat the magic of RK Nagar polls. However, financial constraints imposed by contesting simultaneous elections are going to be a daunting task for its legislators.