An archaic and illegal religious norm continues to be a part of everyday life in Tamil Nadu. A Thomson Reuters Foundation report sheds light on a form of the devadasi system – a practice of keeping young girls in village temples to be worshipped as goddesses – and how this gross violation of human rights is still in practice.

Deavdasis in the 21st century

According to a recent National Human Rights Commission report, this ritual where girls are dressed as brides and then “their dresses are removed, virtually leaving them naked” amounts to abuse and slavery, and is banned.

The devadasi system, which “dedicates” girls to a life of sex work in the name of religion, was outlawed in 1988. Yet, it is bizarre that in the 21st century, girls as young as 10 are forced to live bare-chested at a temple in Tamil Nadu's Madurai as part of a bizarre ritual. 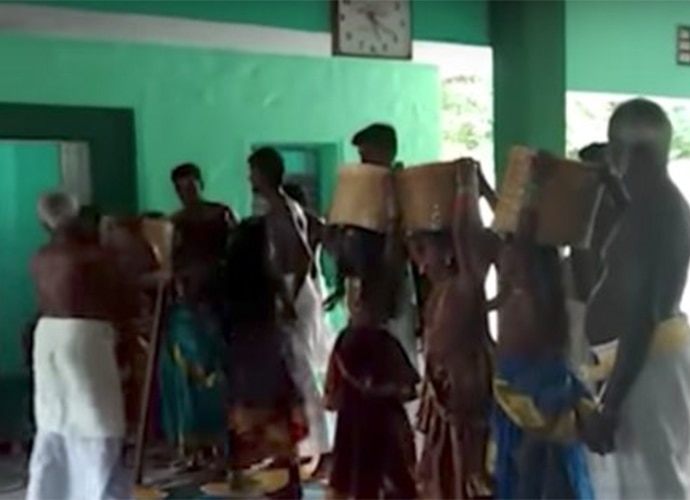 “They are denied to live with their families and have education. They are forced to live in Mathamma temples, deemed to be… public property and face sexual exploitation,” the commission said in a statement, referring to a 15-day-festival in parts of Tamil Nadu, where local goddesses are worshipped and seven young girls are chosen by the community to stay in the temple.

While the state government has denied accusations of abuse, NHRC said the practices violated the children’s rights and asked both the Tamil Nadu and Andhra Pradesh governments to respond in four weeks.

Children’s rights campaigners have claimed that in the name of tradition, hundreds of girls between the ages of seven and 10 years are made to stay in the temple premises during the festivities. These girls are also forbidden to marry and are made to earn their living by dancing at the temples, sometimes even bare-chested with only garlands and jewels covering them.

Priyamvada Mohan Singh, a criminology professor who carried out a survey in 2016 on the devadasi tradition for the Indian government, said of the tradition: “As you travel through the region, the names keep changing, but the fact is that women are being forced into prostitution in the name of rituals.”

"It is an ancient custom. Parents send their girls voluntarily," said Madurai collector K Veera Raghava Rao. “Our child protection team has visited the temple in question and parents are there to take care of the girls,” Rao added.

“These are 200 year old traditions that are practised in many village temples across the region. We have not found any case of abuse and our officials are monitoring the functions. We have asked them to cover the girls with a shawl.”

Saying that parents send the children voluntarily, does not make the actions okay in the eyes of law. Both, parents and temple administrations cannot shrug off their culpability in child abuse just because it is in the name of religion.

A Hindustan Times editorial argues that, “apart from this being wrong in law, there is the matter of the psychological damage to the child to be considered. Putting children through dangerous or demeaning rituals is bound to have a scarring effect on their psyche.”

“The argument that the children are willing participants is specious, children are in no position to take such decisions on their own. The parent, school, religious authority or those in whose care the child is entrusted have to be answerable to the law if they carry out such rituals or encourage the child to undertake any life-threatening course in pursuit of faith.”

Journalist AR Meyyammai, who wrote the story titled “Girls in puberty stage paraded half-naked, offered to deity for a fortnight” for The Covai Post on 24 September, received threats on social media, soon after the report went live. According to HuffPost, Vidyashree Dharmaraj, the portal's editor, has also allegedly received intimidating phone calls, consequently forcing her to lodge a complaint with the IT cell.

The harassment for Meyyammai started on Facebook, after the story got published, when she began receiving several “friend requests” from unknown people. Despite changing her privacy settings, she continued to receive messages from Facebook about a number of unknown people. Thereafter she deleted her Facebook account. But this was just the beginning.

Vidyashree, the editor, soon started receiving threatening messages on her phone. “The first message I received on WhatsApp was a screenshot of the office address, my name and my number. After that I got a couple of messages saying that now I would have to face a lot,” Vidyashree told The News Minute.

As per the TNM story, she started receiving calls around 10pm on September 25. “They were talking nicely initially, saying that we shouldn’t have covered the ritual the way we did. I tried to engage with a few of them, the ones that seemed to be from mobile numbers. But I missed a lot of them. The calls went on through the night. At some point I got bugged and switched off my phone,” Vidyashree narrates.

“There were also several attempts to hack our website,” Vidyashree said, “We received threats saying that our site will be shut down unless we take down the story.”

Press freedom in India is a bit of a joke, with journalists getting threats for their stories and editors for their views. The murder of Gauri Lankesh, though a landmark blow, was neither the first and sadly may not be the last.

According to the 2017 World Press Freedom Index released by Reporters without Borders (RWB), India was ranked 136 out of 180 countries. The report noted, “Journalists are increasingly the targets of online smear campaigns by the most radical nationalists who vilify them and even threaten physical reprisals… journalists working for local media outlets are often the targets of violence by soldiers acting with the central government’s tacit consent.”

India also ranks 13th on CPJ's Impunity Index, a measure of countries worldwide where journalist are killed and the murderers go free.

As recently as September 14, a Times of India journalist in Rajasthan received threats for a story she wrote about the BJP government. The story by Rosamma Thomas, which reported how the scheme, which was hailed as a “safety shield” for farmers, has turned out to be just another way of the government taking Rajasthan’s hapless farmers for a ride, was taken down from the newspaper’s website within hours of publishing.

Oh, and Thomas, too received a threat. Thomas received a WhatsApp message on September 17 that gave an example of Gauri Lankesh’s murder, threatening Thomas with a similar fate in case she wrote against the RSS or Prime Minister Narendra Modi.

But do threats scare the journalists and editors at The Covai Post? No, they don’t. Meyammai firmly states that there is no question of taking down the story. “I was there, and I reported what I saw. It is a sensitive issue for it concerns religion and culture, but there is nothing untrue in what we have reported. It is all factual. We haven’t said that the children are being sexually abused, but we just do not want them to be exploited in any manner. The scope for that in such a setting has to be acknowledged,” she said.