India Today Editor-in-Chief writes about how the battle between the major Dravidian parties promises to be a potboiler even without their star mascots, in the February 22, 2021 edition of the India Today Magazine.

For over half a century, every election in Tamil Nadu has unfolded against the backdrop of its towering political personalities. The state’s politics has been intertwined with its film industry unlike in any other Indian state. The century-old Dravidian movement used the charisma of popular stars like MGR and scripts by M. Karunanidhi and C.N. Annadurai to further its ideology. The movement combined Tamil identity and language to oppose caste, temple worship and rituals. This combination worked spectacularly in a cinema-obsessed state where the lines between stardom and idol worship often got blurred.

The DMK first captured power from the Congress in 1967. Since then, the two Dravidian parties, the DMK (Dravida Munnetra Kazhagam), and its offshoot, the AIADMK (All India Anna Dravida Munnetra Kazhagam), have ruled the state. The DMK has won on five occasions since 1967 and the AIADMK seven times since 1977. The first AIADMK government was dismissed in three years but the party won the following election in 1980. 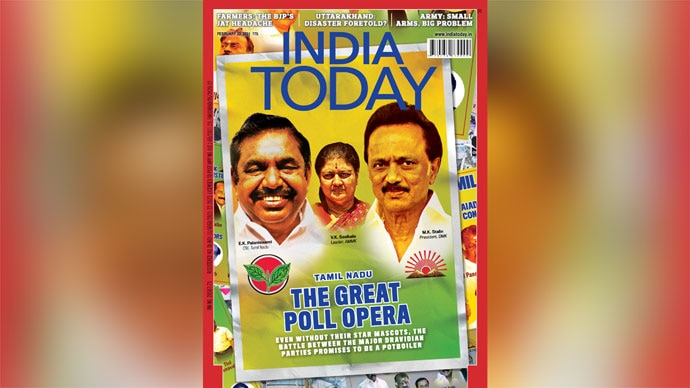 In 2016, J. Jayalalithaa’s magnetism and her populist politics helped her buck anti-incumbency and return to power. She passed away later that year. Her principal opponent, DMK patriarch and the state’s longest-serving chief minister, Karunanidhi, died two years later at the age of 94. The demise of these two Dravidian stalwarts and the unprecedented vacuum it left in the state’s politics was heightened last December when superstar Rajinikanth announced his exit from political contention.

This is what makes the upcoming election in Tamil Nadu so different. Yet, one also feels a sense of anticipation in the run-up to the election just two months away. Chief Minister E.K. Palaniswami and Deputy CM O. Panneerselvam have successfully run the AIADMK government in the past four and a half years. Having carried forward the dole politics of MGR-Jayalalithaa, they are invoking Amma’s legacy again to ask for another five-year term, dedicating museums and memorials to the leader and, more recently, a Rs 12,000 crore farm loan waiver.

Pitted against them is the 67-year-old M.K. Stalin, Karunanidhi’s political heir and the present DMK chief. There is also Jayalalithaa’s long-time associate V.K. Sasikala a.k.a. ‘Chinamma’. She seemed poised to seamlessly inherit Jayalalithaa’s mantle till she was sent to prison in Karnataka in a disproportionate assets case in 2017 and ejected from the party. Her recent return to Chennai at the head of a long-winding motorcade was movie star-like. However, it remains to be seen whether her influence will extend beyond the four districts dominated by her Thevar community.

At stake in this political battle is a state which sends 39 members to the Lok Sabha, the fifth-largest block of seats. It is also a heavily industrialised state and boasts of having India’s second-largest economy by nominal GDP, Rs 18.45 lakh crore, nearly the same as Pakistan’s. According to the India Today State of the States survey in 2020, Tamil Nadu had registered a growth rate higher than the national average for a third consecutive year. At 8.03 per cent, it was double the all-India average of 4.2 per cent in 2019-20. The state’s per capita income in the same year was Rs 1,53,853, taking it from 12th place in the previous year to sixth position. Since 1994, poverty in Tamil Nadu has declined steadily both in urban and rural areas.

The two national parties, BJP and Congress, are only bit players in this arena. However, the BJP’s performance this time could be part of a larger design to expand its electoral footprint. The fact that the party is in power at the Centre makes it a strong ally for a regional party like the AIADMK, especially in the absence of a powerful icon like Jayalalithaa.

Our cover story, ‘The Great Poll Opera’, has been written by Deputy Editor Amarnath K. Menon, who has covered Tamil Nadu for 43 years now. “The AIADMK,” he says, “is invoking Amma’s benevolence, welfare measures and development to woo voters, while the DMK is targeting it for alleged poor governance and corruption.” AIADMK leaders are famously wary of sharing access and information freely. The only time Jayalalithaa granted Menon a media interview was in June 1982, days before MGR inducted her into the AIADMK. Scheduled to meet at her Poes Garden residence, Jayalalithaa asked her staff to bring a bulky Panasonic cassette player to record their conversation. The DMK, like most regional parties in the south, continues to be a family affair and equally intolerant of anything adverse in the media.

This time around, the election looks poised for what could be a nail-biting finish. The AIADMK, which won 40.88 per cent of the votes in 2016, was only marginally ahead of the DMK, which garnered a 39.85 per cent vote share. Voting in the state is not based on any one dominant caste but on multiple caste groups. Hence, both parties have turned to smaller caste-based parties like the PMK and the DMDK to shore up their winnability. The AIADMK, which needs a majority in the 234-seat assembly, is unlikely to cede more than 70 seats to alliance partner BJP and the smaller parties.

There is also movie star Kamal Haasan’s recently-launched political party Makkal Needhi Maiam (MNM), which is contesting all seats as a third front. However, while Haasan may be a popular actor, politically, he is a bantamweight.

The forthcoming Tamil Nadu poll is certainly an unprecedented one and the result uncertain. For that reason, perhaps, it is also a most-awaited election.

#AIADMK, #Tamil Nadu Polls, #India today magazine, #Tamilnaduelections
The views and opinions expressed in this article are those of the authors and do not necessarily reflect the official policy or position of DailyO.in or the India Today Group. The writers are solely responsible for any claims arising out of the contents of this article.