Clearly, the state's political parties have realised that the medium is the message.

The people have spoken and so have the exit polls in Tamil Nadu, but for the few remaining hours before the results are out and the state's newly elected royalty is declared, the citizenry's caricatures will still reign.

As the election war machines of the two main Dravidian parties, Jayalalithaa's AIADMK and Karunanidhi's DMK rolled around these many months, Tamil Nadu took to WhatsApp and other social media to spoof their leaders, in the full knowledge that their jokes will never make it to the politically aligned mainstream media in the state.

The first meme is on the Hollywood actor Leonardo DiCaprio who was recently awarded an Oscar. Clearly, he's grateful that his efforts have paid off because of the support and encouragement that he has received from Puratchi Thailavi Jayalalithaa, the Respected Leader. Here, he shows his gratitude. 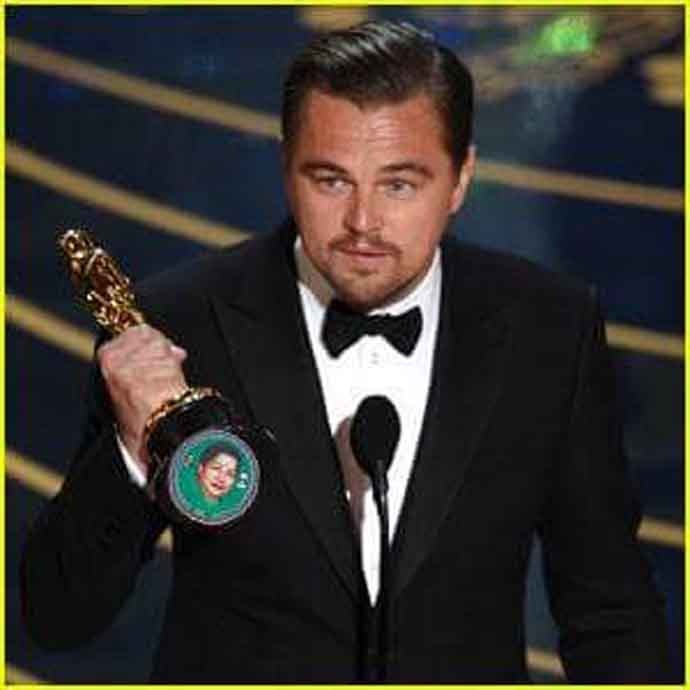 The man in this second meme is called Jaya, but he can't seem to decide what to say in his love letter. It seems the outgoing chief minister also changed her candidates as many as seven times. This meme makes fun of DMDK leader Vijayakanth, who headed a coalition of parties called the People's Welfare Front (PWF). It's a scene from a Tamil movie in which the girl - who represents Vijayakanth, an ageing former film actor - is being followed by several suitors. It seems the PWF leader was also wooed by several parties, no matter they were small ones like the CPI and the CPI(M) and GK Vassan's breakaway faction from the Congress. 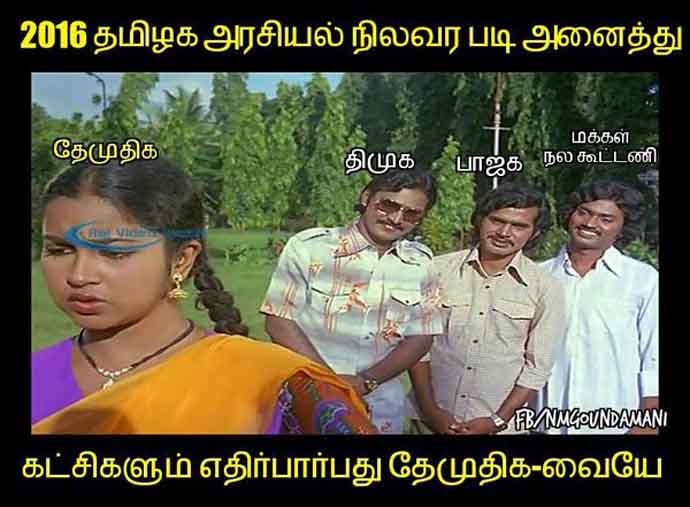 This last spoofs a vain Vijayakanth, whose English is often a butt of jokes, as he takes a selfie. Of course, "Selvi" is the name of DMK chief Karunanidhi's daughter - a popular enough name for women in Tamil Nadu. It is common knowledge that Vijayakanth wanted to ally with the DMK, but the patriarch said "No!" All Tamil Nadu knows that the state's mainstream media, especially TV, is politically aligned with one or another mainstream parties. Clearly, these political parties have realised that the medium is the message.

So Jaya TV is owned by Jayalalithaa, Sun TV (from the rising sun symbol of the DMK) and Kalaignar TV (Respected Leader in Tamil, what the DMK patriarch is called) are owned by the DMK, Captain TV belongs to Vijayakanth, Makkal TV belongs to PMK leader Anbumani Ramadoss, while Thol Thirumavalavan, who heads the pro-Dalit VCK party recently launched a pro-Dalit channel, Velicham TV, on the birth anniversary of BR Ambedkar.

But for the first time, Tamil Nadu's parties also took a leaf out of Prime Minister Narendra Modi's branding and social media book. The DMK was first off the blocks, with Karunanidhi's heir-apparent MK Stalin getting his son-in-law, Sabarisan, to create an online media campaign and merge it with the campaign on the ground.

Sabarisan created a team of several IIT and IIM graduates, including an A Sunil, who was said to be a part of Modi's media juggernaut in 2014.

So when Stalin undertook a two-month tour of all the state's 234 constituencies in September 2015 and called it "#NamakkuNaamey", or "#WeForOurselves", the hashtag went up online. Red and black DMK flags and banners were strung along the route, superimposed with a silhouette of Stalin being created out of the "Namakku Naamey" logo.

But no extemporising was allowed. Enthusiastic party workers were told, in no uncertain terms, that they could not be singing praises of the "Thangam Thalapathy" or Golden Commander. Once the tour was over, Tamil media reported that the #NamakkuNaamey hashtag disappeared from the website. In its place was the red-and-blag DMK flag.

Clearly, an attempt was being made to rebrand Stalin in his father, Karunanidhi's image, and to juxtapose the two in the audience's eyes.

The case of the pro-Vanniyar caste party, Pattali Makkal Katchi or PMK led by Anbumani Ramadoss is an interesting one. The Vanniyars were once a Scheduled Caste, but lobbied in the 1871 census against their lowly hierarchy in favour of becoming upper caste Kshatriyas, which they were successful in doing by the time of the 1931 Madras census. But by the 1980s, as the benefits of Periyar's anti-Brahmin and upper caste movement openly favoured lower castes, the Vanniyars lobbied, once again, to become Most Backward Castes (MBC). And so they are again.

Jayalalithaa, or Amma as she is popularly known, didn't employ the kind of campaign tactics like the others, preferring the low-profile #Mission234 online hashtag, where pictures of her and Tamil Nadu often morph into each other. "Let development continue and let Tamil Nadu glitter," Amma says, in her green sari, a slogan hardly reminiscent of the glint and steel she is otherwise famous for.

Perhaps Jayalalithaa was too busy taking on the press, filing several score criminal defamation cases against it. It is well known in Tamil Nadu that she is intolerant of any kind of criticism, both personal and against her government. Commentaries on her poor ill-health, for example, are completely out of bounds.

Also read - The love-hate relationship between BJP and Jayalalithaa

It is rumoured that she is severely diabetic. Her absence during the December floods in Chennai led to rampant speculation that some of her toes had been amputated, as a result of which doctors had advised her not to get out of her car and into the dirty floodwater.

So when the Times of India ran a story on the floods titled, "Delay in decision to open sluice gates caused flood of trouble," and the Tamil daily Dinamalar also published a similar report, "Perumalai vellamaaga mattriya Tamilaga arasu" (TN government converts torrential rains into floods'), the city public prosecutor ML Jagan filed complaints on behalf of Jayalalithaa against these dailies, saying the stories were malicious and defamatory.

When she came to power in 2011, says B Thirumavelan, the editor of Junior Vikatan, a popular and influential biweekly magazine in Tamil Nadu, she announced a deal with the media. "She would speak to us once a week and in exchange, we were not to bother her at Poes Garden," he recalled, referring to the Tamil Nadu chief minister's official residence.

But apart from some conferences announcing the government's achievements, there was nothing. "Not only her, no government minister was allowed to speak to the media without permission. If at all the government wanted to convey something, it was through press releases. AIADMK panellists on TV also don't give any extra information. It is like a mantra. They don't go beyond their brief. If at all they do, they will heap praises on Jayalalithaa and attack Karunanidhi," Thirumavelan added.

As long ago as 2012, Jayalalithaa took the Tamil biweekly Nakkeeran to court because it called her a "beef-eater". When the venerable The Hindu newspaper picked up the story and ran it, a case was slapped against it too, with Jayalalithaa arguing that just because it was reprinted didn't mean that the editor should be let off the hook.

Anand Vikatan, the flagship magazine of the Vikatan group (of which Junior Vikatan is a part) has about 50 defamation cases filed by the AIADMK government because it took her on.

In November 2015, it ran a series called "Mantri-Tantri" on the track record of the Jayalalithaa government. Nothing happened. But when it published a story titled, "What has Jayalalithaa done so far," a defamation suit was slapped against it and its Facebook page taken down.

According to an anonymous police officer quoted in The Indian Express at the time, "We did not do it. Perhaps the IT wing of the AIADMK did it," he said.

Post your comment
#Karunanidhi, #Jayalalithaa, #Tamil Nadu Polls
The views and opinions expressed in this article are those of the authors and do not necessarily reflect the official policy or position of DailyO.in or the India Today Group. The writers are solely responsible for any claims arising out of the contents of this article.