With 116 members, the AIADMK is well above the halfway mark of 107 in the 234-member Assembly.

In a huge relief for the E Palaniswami government in the southern state of Tamil Nadu, 18 rebel lawmakers of the ruling AIADMK were disqualified by the Madras High Court on Thursday, October 25.

The 18 MLAs, who are loyal to ousted AIADMK leader VK Sasikala and her nephew TTV Dhinakaran, will no longer be members and by-elections will be held for their seats. 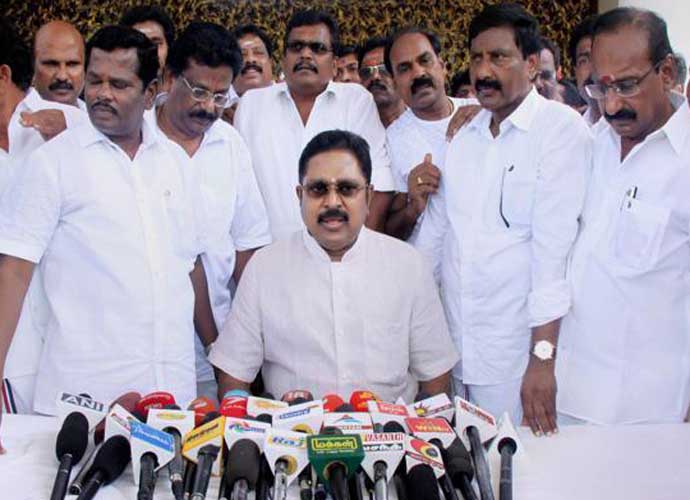 Last year, Tamil Nadu Assembly Speaker, P Dhanapal, had disqualified the MLAs under the anti-defection law after they wrote to the governor seeking the removal of chief minister Palaniswami.

This followed the merger of the Palaniswami and O Panneerselvam factions that were formed after the death of J Jayalalithaa and ascendency of VK Sasikala as the supremo in the AIADMK.

The rebels later moved a petition in the HC challenging the Speaker’s decision following which the court restrained the Election Commission from declaring their seats vacant.

There was a fear that the state government would lose its majority in the Assembly and fall if the court had cancelled the disqualification move because the rebels were expected to vote against the government.

Welcoming the court’s verdict today, the AIADMK, in a tweet, said it is a “correct lesson for the traitors and that democracy has won”.

With the current order, 20 seats now lie vacant and the Tamil Nadu Assembly's strength is down from 234 to 214.

With 116 members, the AIADMK is well above the halfway mark of 107. If the rebel lawmakers had been reinstated, the total would have gone up to 232 and the AIADMK would have been one lawmaker short of a simple majority (117).

Sasikala, a long-time aide of AIADMK chief J Jayalalithaa, took control of the party after her death in December 2016 and was about to take charge as chief minister when she was jailed for corruption.

Following her imprisonment in the disqualification case, Sasikala had installed her nephew Dhinakaran as the party’s deputy general secretary, but his relegation from the party came about in the course of the merger of the two factions.

It is not a setback for us. This is an experience, we will face the situation. Future course of action will be decided after meeting with the 18 MLAs: TTV Dinakaran on disqualification of 18 AIADMK MLAs upheld by Madras HC pic.twitter.com/yg1K9VDSLb

She was removed as AIADMK chief but continued to control the dissidents along with Dhinakaran.

Dhinakaran won the RK Nagar seat vacated by Jayalalithaa in by-polls a year ago.

Talking about the development, Tamil Nadu deputy Speaker Pollachi V Jayaraman told ANI, "This is a victory for dharma and a slap in the face of traitors and cheaters. Even if an appeal is filed, we are sure that the truth will only win."

This is a victory for dharma & a slap in the face of traitors & cheaters. Even if an appeal is filed, we are sure that truth only will win: Tamil Nadu Deputy Speaker Pollachi V Jayaraman on disqualification of 18 AIADMK MLAs upheld by Madras High Court pic.twitter.com/D3ifZceloQ

Also read: Jamal Khashoggi was brutally murdered. But the US doesn't care because its interests lie elsewhere