As Karunanidhi turns 93, the party's over for DMK

He will be remembered for allowing naked ambition, alleged corruption and family rule to drain out his political battery.

During the election campaign in Tamil Nadu, M Karunanidhi referred to Jayalalithaa as "Maharani", pointing out that she did not stir out of Poes Garden, except once in a helicopter, when Chennai was drowning in December 2015.

As the grand old man of Tamil Nadu politics steps into his 93rd year, there is more than a tinge of regret. That he could not become Chennai Super King for the sixth time.

3 reasons DMK is now a doomed party in Tamil Nadu

Analysts have blamed his obsession with power for the defeat. That only if he had agreed to project son MK Stalin as the chief ministerial candidate, the DMK could have made a better connect with the younger voters. That if Kalaignar (artist, as Karunanidhi is referred to) had opted to retire, he wouldn't be retired hurt today.

That it was not Jayalalithaa who defeated Karunanidhi. 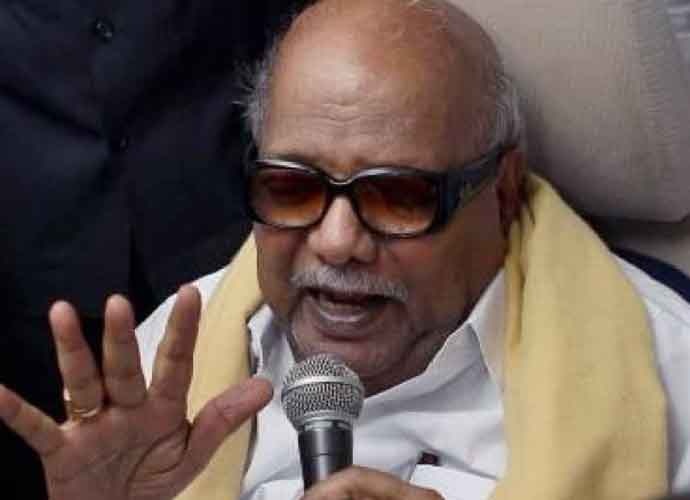 Karunanidhi uses this statistical jumla to prove that he was more than acceptable as the chief ministerial face to the electorate. And that it was the Congress which polled only 36.46 in the 41 seats it contested that proved to be Karunanidhi's Achilles' heel.

Like 92-year-old VS Achuthanandan across the Mullaperiyar, Karunanidhi too tried to reach out to the younger voter by marking an active presence on social media.

However, the same voter in the 18-30 age bracket does not relate to Karunanidhi as the ace scriptwriter, who blazed a trail with movies like Parasakti. For him, his image of Karunanidhi is fashioned by his family's alleged involvement in the 2G scam and Kalaignar TV scam.

In 2011, when he was vanquished, Karunanidhi had wryly said, "People have given me rest."

In 2014, he spoke about campaigning for the last time, during the Lok Sabha elections.

This time, he said, "I will come to you even if I am 100.'' The leader of the party of the rising sun does not know what a political sunset means.

Perception matters and that is where Karunanidhi read the script wrong. During his election campaign, he was accompanied either by grand nephew Dayanidhi Maran (former telecom minister, facing a plethora of corruption charges) or daughter Kanimozhi (who spent 193 days in jail in the 2G case) or DMK leader A Raja (former telecom minister who went to jail in 2G case).

At a time, when Jayalalithaa was telling the people that a return of Karunanidhi will mean the return of the "corrupt'' family raj, Karunanidhi only seemed to provide the visual support to her charge. The DMK during the days of the 2G scam was sarcastically referred to as "Delhi Money for Karunanidhi" party.

In Tamil Nadu, it was no longer seen as the grand Dravidian outfit that propounded the values practised by Periyar and Annadurai and had reduced itself to a Karunanidhi family branch.

In 2016, with Maran, Kanimozhi and Raja by his side, Karunanidhi unfortunately reinforced that perception. How does the future look for Karunanidhi in the nervous 90s? He has made a beginning by anointing Stalin the leader of the opposition, which means the Tamil Nadu Assembly is not likely to see much of the patriarch during debates.

Karunanidhi realises the DMK of today is not his party, but belongs to Stalin. His younger son, after having forced brother MK Alagiri out of the DMK, has packed the party at every level with his men and women.

So a handing over of the baton in the opposition benches is the first step Karunanidhi has taken to reconciling himself with reality.

But DMK is not just a political party. With family members as a part of the party apparatus, it is like a home away from home. Karunanidhi had his reasons to aim one last time at Fort St George.

Alagiri may be out of the party but he is still part of the drawing room at Gopalapuram (Karunanidhi's residence in Chennai). Projecting Stalin as CM candidate could have triggered a mini-rebellion within the household, something Karunanidhi would be loathe to face at this stage of his life.

The 2016 defeat means Karunanidhi spends more years in political oblivion, without a say in Chennai or in New Delhi as his party has no Lok Sabha MPs. This is a departure from the past when Karunanidhi would do business easily with both AB Vajpayee in the NDA and Sonia Gandhi in the UPA.

With both arrangements at the Centre, he bargained hard and got his pound of flesh in the form of plum portfolios for his party MPs. In sharp contrast, there is nothing on the table now for Karunanidhi.

Karunanidhi may also do well to rethink on his choice of political friends. The Congress proved to be an electoral liability winning just eight of the 41 seats it contested.

It must however, be pointed out that with a dedicated 2,000-3,000 votes in many constituencies, the Congress could have hurt the DMK if it had not opted for an alliance with the national party.

But Karunanidhi blundered by giving it 41 seats. Would the DMK try to build bridges with a BJP that is keen to spread itself in south India in 2019? Tough to answer given Narendra Modi's equation with Jayalalithaa and the BJP's attack over 2G in the past.

Karunanidhi has often been referred to as the master of the craft of politics but his bag of tricks now seems to be empty. The birthday cake hardly looks inviting.

A man surrounded by relatives, party men and admirers but lonely. The man, who fought all his life against friend-turned-foe MG Ramachandran and later archrival Jayalalithaa, will unfortunately be remembered by today's generation for how he allowed naked ambition, alleged corruption and family rule to drain out his political battery.

#Tamil Nadu, #Jayalalithaa, #DMK, #M Karunanidhi
The views and opinions expressed in this article are those of the authors and do not necessarily reflect the official policy or position of DailyO.in or the India Today Group. The writers are solely responsible for any claims arising out of the contents of this article.