Tanishq row: What Tatas can learn from Hamara Bajaj

Just as a scooter belongs to every Indian, so must the idea of love. Which is why if I was on the Titan board, I would get the 'offensive' ad back on air.

Long before Prime Minister Narendra Modi gave the slogan ‘vocal for local’, I was already well and truly ‘desified’. For example, for most of my professional life, and certainly over the last two decades, I have only worn a Titan watch. Every two to three years, I go to the Titan showroom in Delhi’s South Extension and choose a nice new watch. I like Titan watches: they are simple, unostentatious and yet very well designed. Excellent value for money for a typical middle-class mindset. In fact, I was planning to go this Diwali and buy myself a new watch. Now, I am not so sure. I must confess that the totally unwarranted and terribly polarised controversy over the ad film for the Tanishq jewellery brand, part of the Titan chain, has left me angry and disillusioned. Let me explain why.

I am angry because I cannot understand how a social media ‘mob’ of crazies can arrogate for itself the right to decide on whether an advertisement can be shown or not. Only a truly bigoted mind would find an ad where a Hindu girl is being married into a Muslim family an affront to their sensibility. To describe it as ‘love jihad’ is even more noxious: what kind of bizarre terminology is this that seeks to ‘weaponise’ love? That the vocabulary of ‘love jihad’ has been ‘mainstreamed’ is deeply troubling: When ruling party leaders loosely use words like ‘love jihad’, it becomes a license for the cadres to speak in a similar language.

The reality is different. Forget about the many durable aam aadmi interfaith marriages, I know also of mantris in this BJP-led government who have had highly successful Hindu-Muslim marriages. The Tanishq ad should be seen as a celebration of an Indian ethos of inclusivity and acceptance. Only in an extremely intolerant universe would such an advertisement be viewed as reason enough to boycott Tanishq or spread fear and intimidate its employees and store owners. We even have a BJP MP Geetha Kothapalli claiming: “Why do the creative directors who make these stupid ads not think of a Muslim girl and a Hindu boy? Do creative ad guys fear a Muslim backlash?”

Here’s my response to the honourable MP. Let’s assume for just a moment that the creative ad filmmakers do fear a Muslim backlash. Let’s accept that there are Muslim extremists out there who target a Sania Mirza for her short tennis skirts or send death threats to Bengali actor and MP Nusrat Jahan for posing as Durga on social media. A few days ago, a Delhi University Hindu boy was killed because he reportedly ‘dared’ to fall in love with a Muslim girl in the neighbourhood. The question is, do we want to mimic the worst of such Islamic fundamentalists by engaging in competitive intolerance? Isn’t the idea to promote the glorious, uniquely plural traditions of Hinduism rather than allow religious identity to be tied into narrow-minded antagonisms? Shouldn’t we be looking to use our creative impulses to reflect the best and not the worst in us? We justifiably attack the so-called Islamic ‘jihadists’ for their militant intolerance, then what should one call the right-wing Hindutva groups that cannot even accept an imaginative ad film that promotes inter-faith harmony through marriage? 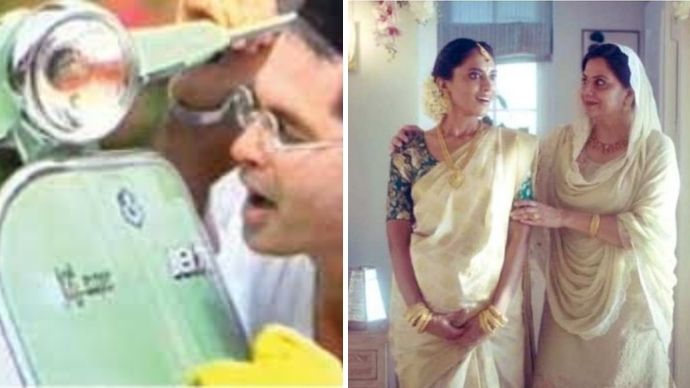 While the Tatas' brand cannot resist a social media campaign by vested interests, Rajiv Bajaj has truly lived up to the ideals of the brand tagline, ‘Hamara Bajaj’.

Truth is, one expects no better from Muslim and Hindu fundamentalists any longer: they will continue to exist in their competitive black holes of hate and violence, perhaps feeling empowered with a renewed sense of muscularity because of the rise of religious nationalisms both in India and across several parts of the world. These are the same gangs that in the past have burnt books and acted as super censors, be it with books, plays or cinema. They will continue to fight their real and imaginary culture and religious wars because, frankly, they have nothing better to do: this is an employment opportunity for them in times of job scarcity.

But what has really angered me is the response from Titan. This is a premium, gold standard company from the House of Tatas, a company that is much admired in the corporate world. Instead of standing up to the bullies, Titan has succumbed and withdrawn the ad. In their statement withdrawing the ad, Titan says: “The idea behind the Ekatvam campaign is to celebrate the coming together of people from different walks of life, local communities and families during these challenging times and celebrate the beauty of oneness. We are deeply saddened with the inadvertent stirring of emotions and withdraw this film keeping in mind the hurt sentiments and wellbeing of our employees, partners and store itself.”

‘Hurt sentiments’? I mean, really. Whose ‘sentiments’, I ask. Here is an iconic brand that proudly speaks of celebrating the beauty of oneness and then falls for the familiar ‘hurt sentiments’ argument. For god's sake, in a diverse country like India, this ‘hurt sentiment’ claim is a dangerous one and must be fought and resisted. How long will the hurt sentiments of a vocal minority, then be it Hindu or Muslim, decide the choices of the silent majority? As for personal safety, isn’t that the job of the government to ensure? Truth is, the moment you succumb to these kinds of pressure tactics, you let the mob win, the bigots who cannot embrace the idea of Hindu-Muslim religious harmony.

The anger has also led to disillusionment. Titan is, after all, part of the House of Tatas. Few companies have symbolised the sense of Indian-ness, of integrity, inclusivity and charity quite like the House of Tatas. It’s a tradition that goes back decades to its original founders. When you went to Bombay House, the headquarters of Tatas, there was an overwhelming feeling that you were walking through the corridors of history, a corporate house that always claimed to be more than just another commercial enterprise. Which might explain why the famous Tata Steel tagline was, ‘We also make steel’. Which explains why when 26/11 struck the Taj, Ratan Tata stood tall as a symbol of compassion and courage with his employees. Which is why a Tata truck on the road is a reminder that some things in India remain reassuringly stable in a chaotic world.

To then find that even the Tatas' brand cannot resist a social media campaign by vested interests is disillusioning. Because when the Tatas also join the bandwagon of religious appeasement, then what is left? What hope then for the small shop owner whose establishment may be vandalised because he stores a product that someone in the neighbourhood doesn’t approve of? Which is also why I want to salute Rajiv Bajaj of the Bajaj auto family. This week, Rajiv boldly announced that his company would not advertise on three news channels that in his view were pushing hate politics and venomous agendas: "I do not want my children to inherit an India built on hate." It was a short, sharp comment, but one that should resonate within the business community and beyond. Some would say it takes courage to do what Mr Bajaj has done. To my mind, more than courage, it just takes common sense and conviction. Because when you allow toxic agendas that seek to divide to flourish, you undermine the idea of India as a truly tolerant, inclusive, multi-faith society. To my mind, with this one standout gesture, Rajiv has truly lived up to the ideals of the brand tagline, ‘Hamara Bajaj’.

Well, just as a scooter belongs to every Indian, so must the idea of love. Which is why if I was on the Titan board, I would get the ‘offensive’ ad back on air. That would be a powerful statement of a brand’s genuine commitment to the idea of ‘oneness’. It would also enable me to happily go back next month to a Titan showroom and buy my Titan watch and show it off with pride. C’mon Tatas, you can do it!

#Hamara bajaj, #Rajiv bajaj, #Tata Group, #Tanishqad
The views and opinions expressed in this article are those of the authors and do not necessarily reflect the official policy or position of DailyO.in or the India Today Group. The writers are solely responsible for any claims arising out of the contents of this article.