Checkmate for Chandrababu Naidu? As TDP MPs join BJP, Naidu may meet his nemesis in his own proteges

Is BJP going to wipe out TDP from Andhra? Or is the TDP MPs' move to the saffron party actually a clever ploy by Naidu?

When the four Rajya Sabha members deserted the Telugu Desam Party (TDP), it was déjà vu for the umpteenth time for political observers. Neither apostasy by legislators and Parliamentarians, nor a crisis in the TDP is a new phenomenon for those who have observed the party over the years.

All the four MPs who switched camps are industrialists — Y Satyanarayana Chowdary, alias ‘Sujana’ Chowdary, CM Ramesh, TG Venkatesh and Garikapati Mohan Rao. All four have business interests reportedly worth crores, and Chowdary and Ramesh are also reportedly under the scanner of Enforcement Directorate (ED) and Central Bureau of Investigation (CBI).

As a part of the investigations, searches were conducted in the business establishment premises of Chowdary and Ramesh, and several documents were apparently seized for further examination.

Whether they were found to be incriminating in nature — or will they no longer be so — will be decided in due course. For now, they have been insulated, thanks to their admission into the Bharatiya Janata Party (BJP). The Anti-Defection Law can be “interpreted” to meet the political expediency, rather than its intricate legalities and moralities.

Well, that’s an aside — it is still for the first time in the history of Andhra Pradesh that so many Rajya Sabha members crossed the floor, though it happened quite a few times in the case of Lok Sabha members.

TDP supremo N Chandrababu Naidu, who went on a family vacation to Europe recently, tried to put up a brave front saying that crises were not new to the TDP and it would weather the storm. He made a matter-of-fact observation that the MPs “had their own personal agendas to address”

Is BJP aiming to finish TDP?

Has the BJP organised this move though and is it out to finish the TDP, once and for all, in Andhra Pradesh?  Is the scooping out of four Rajya Sabha members by the BJP the beginning of the end of the TDP? Has the TDP reached its political precipice — is it on the verge of meeting its nemesis?

Let there be no doubt over the BJP nursing ambitions to gain a foothold in the South. If it cannot do it by hook, it can deflect its approach to gain it by crook.

But of all the people, Chandrababu Naidu cannot cry foul over the floor-crossing by his party MPs. Naidu himself apparently has quite a proclivity for engineering such defections — from reportedly usurping NTR’s power, to the recently reported allurement of 23 MLAs and 3 MPs from the YSR Congress. 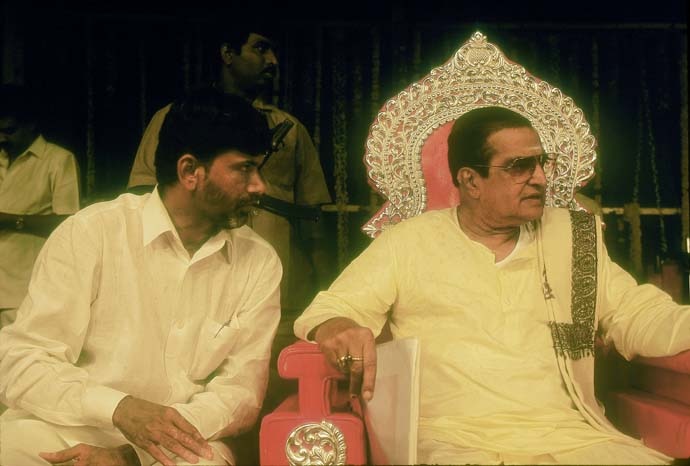 Naidu began his political career with ensuring the victory of a rebel candidate against the official nominee of the Congress in Chittoor Zilla Parishad chairman elections in 1977. Ever since, his political flip-flops and Machiavellian acts of political maneuvering — jumping from Congress to TDP, usurping power from NTR, installing the United Front Government with the help of the Congress, joining hands with the NDA in 1998, deserting it in 2004, rejoining in 2014 and again exiting in 2018, joining hands with the Congress in 2018 — have made him infamous.

Chandrababu Naidu’s exit from the NDA — which Sujana Chowdary termed a monumental blunder — and his subsequent attempt to stitch together an anti-Modi coalition left enormous bitterness between the Modi-Shah combo and the TDP.

Modi and Amit Shah appealed to the people of Andhra Pradesh to defeat the TDP but cleverly desisted from mentioning whom should they vote for.

The BJP is beating Naidu hollow and making him realise what goes around, comes around.

So, Naidu cannot take a high moral ground to combat the usurpation of these MPs by the BJP. Speculation is rife that the BJP is reportedly negotiating with two-thirds of MLAs in the Andhra Pradesh Legislative Assembly to attract them into its fold — if this materialises, the BJP emerges as the main Opposition in the AP Assembly.

This means that Naidu loses the status of the Leader of the Opposition with a Cabinet rank.

If this situation arises, the BJP would launch a top-down approach to nullify the TDP from ‘top to bottom’ and not in the reverse direction. The BJP knows for sure that it is well-nigh impossible for it to build cadres from the grassroots level and in local bodies, district bodies and above, immediately. So, the threat is imminent for the TDP from the BJP. If the BJP succeeds in this attempt, it will be fighting the YSR Congress in the 2024 elections in AP.

However, this seems to be a far-fetched scenario as of now.

NOTA got more vote share than either of the parties at 1.28%. Between The Lines: PM Modi and Naidu shared amiable ties. Is there more to the MPs' move than meets the eye? (File photo: PTI)

Moreover, the vituperative outburst by the party’s senior leaders against the turncoat MPs has left an acrimonious aftertaste. The perfidy of the ‘Sujana Chowdary & Co’ is associated with the dubious intention of safeguarding their own pecuniary interests, and is burning bridges between the party’s leadership and the four MPs.

The charge that none of them could fight a direct election and win even a few votes has become a point of derision as these leaders were handpicked by Chandrababu Naidu for the Rajya Sabha. Ironically, the two members who are staying with the TDP are still considered the Telugu Desam Parliamentary Party in the Upper House. It would be interesting to see how the courts if moved, would react to the “proclaimed legitimacy” to Sujana Chowdary and his associates.

Has Chandrababu 'exported' Sujana and Ramesh?

Another reading is that the TDP supremo has deliberately sent these MPs to the BJP in a bid to mend fences, close ranks with the BJP and placate the tempers of the Modi-Shah duo. This would help the TDP to insulate itself from a possible onslaught of a slew of legal cases and inquiries.

This is the view generally aired by the ruling YSR Congress in Andhra Pradesh.

Chowdary’s words that he wishes “the TDP gets strengthened and Chandrababu is my political mentor” seem to lend credence to this theory. Naidu’s silence towards the BJP is dubbed as part of softening his stand — this could even lead to an eventual truce between the two parties, which have enjoyed a blow-hot, blow-cold relationship.

Also, metaphorically speaking, Chowdary and Ramesh are the left and right ventricles of Naidu’s clout. They had their way and say in everything that the TDP did since 2004. Both got renewed terms as Rajya Sabha members. Brushing aside internal dissensions, Naidu made Chowdary his point-person in Narendra Modi’s Cabinet in 2014. Even now, Chowdary and Ramesh are seen as Naidu’s coverts in the BJP.

However, the BJP, which might want to establish its roots reversing the natural process may first use the two MPs to its advantage, asphyxiate Naidu and later make them sacrificial lambs by bringing them to book only to prove a point of being squeaky clean.

Thus, Naidu may meet his political nemesis in his own henchmen, in the evening of his career.

Also read: Why Chandrababu Naidu is not missing a beat to take on Modi

Post your comment
#YS Jaganmohan Reddy, #Amit Shah, #BJP, #Narendra Modi
The views and opinions expressed in this article are those of the authors and do not necessarily reflect the official policy or position of DailyO.in or the India Today Group. The writers are solely responsible for any claims arising out of the contents of this article.