The TRS government is balancing development and welfare. YSR Congress is busy fixing problems created by its predecessor.

Even as Telangana is brimming with initiatives and investments from global majors and Indian corporates, with the Telangana Rashtra Samithi (TRS) government having its say and way, the state of Andhra Pradesh is grappling with the problems it has inherited.

While KT Rama Rao, the poster boy of Telangana, who is portrayed as the future chief minister of the state, rubbed shoulders with Coca-Cola CEO James Quincey and Google CEO Sundar Pichai at the World Economic Forum (WEF) summit in Davos, and Salesforce cofounder Parker Harris in Hyderabad, Andhra is literally besmirched with no planning and vision for the lofty promises publicised through high-decibel campaigns over the last five-and-a-half years.

Amazon has set up its largest ever campus outside the US in Hyderabad. It now proposes to set up two data centres at an estimated cost of $1.6 billion (about Rs 11,000 crore) in Hyderabad. In his discussions with Pichai, KTR brought up the issue of expediting work on Google’s second-largest campus, outside the US, in Hyderabad. One of the largest pharma companies, Piramal Group, has come forth to invest Rs 500 crore to expand its operations in Pharma City on the outskirts of Hyderabad.

The latest in the bounty of benefits reaped by Telangana is the upcoming world’s largest pharma cluster and India’s biggest medical devices hub. The investments promised during the just-concluded BioAsia 2020 are also significant.

The TRS government doesn’t have a hostile media and the political opposition in the state is almost dismal. K Chandrashekar Rao has ensured that everyone falls in line, thanks to his political legerdemain. Considering local equations, he vehemently opposes the BJP’s policies at the Centre, the latest being the Telangana Cabinet’s appeal to the Centre to repeal the Citizenship Amendment Act.

While many leaders are wary of the media ascribing the term ‘soft Hindutva’ to them, KCR makes no bones about demonstrating his faith in his religion.

By patronising the construction and renovation of temples such as Yadadri and Vemulawada with an outlay of hundreds of crore, and participating in rituals, KCR makes it a point to convey that he is religious and devout.

If Telangana has an accumulated outstanding debt burden of 21.3 per cent of the gross state domestic product (GSDP), amounting to approximately Rs 2.02 lakh crore, people can see where the money has been spent.

Over Rs 1.20 lakh crore have gone into the largest lift irrigation project, Kaleshwaram. Huge sums are being spent on the ongoing Mission Bhagiratha, which promises to provide potable water to all households, and many other such programmes.

Buoyed by confidence from the victories in the local body and municipal elections, the TRS government is able to balance development and welfare to a large measure. 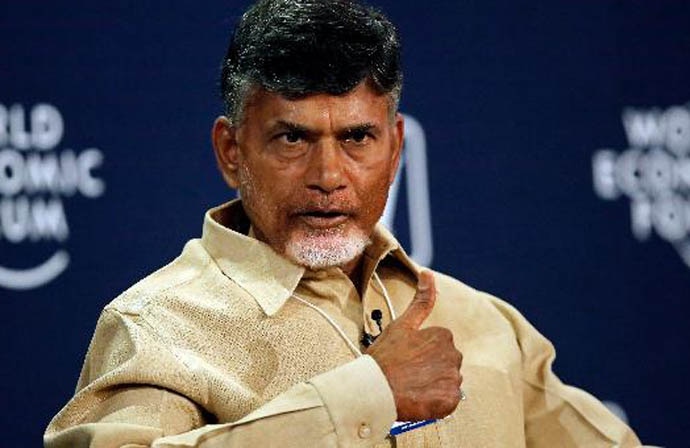 N Chandrababu Naidu's visits to the World Economic Forum meetings have been a waste of money. (Photo: India Today)

The total investment promise made in the series of partnership summits run into several lakh crores, but what has translated into reality is nowhere near the boastful claims.

If all this were realised, Andhra would have been the richest state without a reason to look back and the MoUs in three years alone would have provided employment to 44 lakh people. Even if 20 per cent of these deals would have translated into reality, the state would have been buzzing with economic activity.

Not that nothing has happened during the period between 2014 and 2019. There have been some remarkable achievements like the proposal of HCL Technologies to invest Rs 750 crore for a development centre to create 7,500 jobs, TCL Electronics proposing a Rs 2,000 crore investment in Tirupati, establishment of $1.1 billion KIA Motors manufacturing unit in Anantapur district, which was recently rumoured to shift its factory to Tamil Nadu, but the company denied it, and construction of Millennium Towers in Visakhapatnam for housing IT companies.

The massive estimated outlay of Rs 4 lakh crore to Rs 5 lakh crore of government and private investment for the creation of a world-class state capital was always a tough ask on the state exchequer.

The huge sums invested into the ‘interims structures of secretariat, high court and assembly have also come under criticism. Amaravati became a white elephant because of the policies of the TDP government's unrealistic planning. (Photo: Reuters)

The YSR Congress has cornered the Telugu Desam Party (TDP) over Amaravati because the previous government under the party made impractical promises and glossed over the realities facing it.

From land allotments to private institutions for a song, to leasing of lands to state institutions at exorbitant rents, to purchase of land in the proposed capital region during the TDP rule, have all come under scrutiny.

Chief Minister YS Jaganmohan Reddy said his government did not have the same luxury of funds that TDP had — Rs 1.09 lakh crore of state contribution to build a city.

Between 2014 and 2019, Naidu’s regime governed with a complete lack of vision and failed to use the opportunity to prove itself by building up the state after bifurcation.

Under Jagan, reverse tendering, calling for tenders seeking reduction of cost, for contracts that were already awarded, has gained traction. Jagan had repeatedly promised reverse tendering if he came to power.

While the YSR Congress regime is also determined to renegotiate the power-purchase agreements with private power companies, some TDP leaders, media houses and industrial houses are lobbying with the Union government to insulate the companies from the state’s moves, citing depleting investors’ confidence.

The MoUs signed with some large corporate with regard to land allotments have been scrapped by the state government. A case in point is the Lulu Group that was supposed to build convention centre and mall in Visakhapatnam. The decision was taken on the ground that the companies have not started any work on the ground.

Similarly, Adani Group, which promised a data centre with an investment of Rs 70,000 crore investment, $11 billion, over 20 years in Visakhapatnam (interestingly the size of Adani Group itself is USD 13 billion currently), on being asked by the state government to credibly revise the plans with specific time frames, brought the investment down to Rs 3,000 crore in two years.

Finance Minister Buggana Rajendranath Reddy tore apart these policies in the Assembly, impaling the mismatch between the tall claims by the TDP regime and the ground reality. He charged the Chandrababu Naidu administration with skulduggery.

Against this background, Jaganmohan Reddy has come up with an idea of creating three capitals for the state of Andhra Pradesh – Amaravati as legislative capital, Kurnool as judicial capital, and Visakhapatnam as an administrative capital.

The opposition to the idea is coming only from a section of the TDP leaders and a few TDP friendly media houses. Even though TDP though this would lead to massive opposition across Andhra Pradesh, it hasn’t happened. The state, which chose to have the decision passed through legislative, hit a stumbling block in the Legislative Council.

Irked by this, the Jaganmohan Reddy government recommended the dissolution of the Legislative Council. The Assembly passed a resolution and the matter is lying with the Centre. Also, the decision has to clear judicial hurdles.

The YSR Congress is grappling with daily agitations, bitter political and media attacks besides delivering on administration and keeping its rank and file in good humour.

The Andhra government is meeting its political challenges in its own ways even as Telangana is set on the path of development.

Unfortunately, the Andhra government is being forced to pay the price for the legacy that was handed over to it.