The Telangana Rashtra Samithi is largely KCR's family. And we don't mean his political family. Here is a look at the key contenders from the party.

K Chandrashekar Rao has been accused of nepotism by his detractors. While the key faces of TRS in Telangana Assembly Polls 2018 are of KCR, his son and his nephew, and a key campaigner being his MP daughter, the caretaker chief minister of India's newest state claims that they are party candidates and have been elected to power. Each of the three men — who are the face of the Telangana Rashtra Samithi in the upcoming elections — are meritorious and controversial in their own ways.

The 64-year-old first Chief Minister of India’s newest state is considered the political face of the Telangana movement. KCR — as he is popularly known — is a native of Chintamadaka in Medak district, Telangana and completed his Master's degree in Telugu literature from Osmania University, Hyderabad. After dabbling in student politics and being associated with the youth Congress in Medak district during Emergency, KCR led a householder’s life miles away from the political equation. Not many are aware that KCR was an immigration consultant before the political plunge, and earned the sobriquet "Dubai Sekhar" because he used to send people to the gulf.

When N T Rama Rao (NTR) floated the Telugu Desam Party (TDP) in 1982, KCR was one of the early members of the TDP — joining in 1983. He is a senior in the party to NTR’s son-in-law-turned-political-foe — Nara Chandrababu Naidu and was at one point considered a close member in Naidu's coterie. Soon after joining the TDP, KCR contested against Ananthula Madan Mohan of Congress and lost the elections. That was the only election KCR ever lost.

He bloomed as a politician under NTR and was the Minister of Drought & Relief, TDP convener for Medak, Nizamabad, and Adilabad districts under NTR regimes. Subsequently, he played a key role in Chandrababu Naidu's coup against NTR in 1995. Acknowledging KCR’s role in getting him the Chief Ministerial post, Naidu made him the Transport Minister in his cabinet.

This was the beginning of the end to the KCR-Naidu friendship. Many cite political differences between the two, however, analysts believe that Naidu paid too much heed to some officials of the then-Chief Minister's Office, who meddled with the affairs of KCR's transport department. Naidu won the Assembly elections in 1999, and KCR was dropped from the cabinet. To add insult to the injury, Naidu appointed KCR as the Deputy Speaker of the Assembly in 2000. KCR, however, it is said, never forgot that Naidu denied him a Cabinet berth.

In 2001, KCR quit the TDP and launched his party — Telangana Rashtra Samithi, with the primary demand of an independent state culled out from erstwhile Andhra Pradesh (now known as unified Andhra). His argument was that Naidu was not committed to the Telangana cause, and was meting out poor treatment to the region as Chief Minister.

It is to be noted that the movement for an independent Telangana had begun even before KCR was born. In December 1953 the then-Home Minister Govind Ballabh Pant merged Andhra and Telangana along linguistic lines to form the Andhra Pradesh state — much to the dissent of the Telangana people.

In the 2004 Assembly polls, KCR contested as the TRS candidate and won Siddipet assembly constituency. Subsequently, TRS contested the 2004 Lok Sabha elections in alliance with the Congress — the condition was that Congress declares Telangana as an independent state if it formed the government. KCR won the Karimnagar Lok Sabha constituency and was a part of the UPA-I coalition government as the union minister of Labour and Employment.

However, in 2006 TRS withdrew its support from the government in protest against the failure of the Centre to announce a timetable for the creation of separate Telangana. In the 2006 Lok Sabha by-election in Karimnagar constituency, KCR secured a landslide victory.

In the 2009 Lok Sabha elections, KCR won the seat from Mahbubnagar constituency and in the Assembly polls the same year, TRS contested as a part of the "Grand Alliance" along with CPI and former rival TDP. It was ostensibly to vanquish the ‘corrupt Congress’ and ‘communal BJP’. However, TRS switched allegiance to the NDA after the polling and before the counting of votes. From an immigration agent to the first Chief Minister of India's newest state, KCR has come a long way. But will he go ahead in 2018 Assembly polls? (Photo: PTI)

Life has come around a full-circle for KCR in less than a decade since then — in the 2018 Telangana assembly elections, the Congress, the Telangana Jana Samiti (TJS), the TDP and the CPI have announced the formation of Mahakutami — the ‘Grand Alliance’— with the objective of defeating the ruling TRS.

On November 29, 2009, months after the death of Andhra Pradesh Chief Minister Y S Rajashekhara Reddy, KCR started a fast-unto-death demanding that the Congress party introduce a Telangana bill in Parliament, earning him the sympathies and the full support of the Telangana regions of Andhra Pradesh — a sentiment that is still largely prevalent even today. KCR subsequently broke his fast on December 9, 2009. A Joint Action Committee (JAC) was then formed to lead the movement. Osmania University professor M Kodandaram was its convener, who became KCR’s close aide — and is now opposing him in 2018 polls by forming and leading the Telangana Jana Samithi party.

In October 2013, the union cabinet finally approved the creation of the new state of Telangana, after much negotiations, threats, persuasions and tactics. On June 2, 2014, the then-President Pranab Mukherjee issued a gazette notification formalising the separation of Telangana from Andhra Pradesh. In the subsequent elections, TRS won 65 of the 119 Telangana assembly seats and KCR was sworn in as the first Chief Minister of the state on June 2, 2014.

After four years in power, on September 6, 2018, KCR decided to dissolve the state assembly and call for early elections. His reasoning was that the political fragility in the state was increasing as the opposition has been making baseless allegations against him. However, observers opine that he decided to go in for the assembly election to make political gains which he would want to leverage during the Lok Sabha elections in mid-2019.

KCR now faces the polls with former adversaries and allies coming together to oppose his government under the umbrella of Mahakutami.

Considered a darling of the masses in the urban areas, KTR is one of the prominent faces of the TRS after KCR. While the father is known for speaking the language of the masses, and a typical crowd puller in the rural areas — KTR is the suave face for the corporate sector. Not surprisingly, he held the portfolio of information technology in KCR’s cabinet along with that of textiles and municipal administration.

Holding an MSc in Biotechnology and MBA from City University of New York(CUNY), USA, KTR used to work in IT sector till 2006 before joining his father in campaigning for a separate statehood. His arrests during the agitation gathered him the sympathy of the masses and when statehood was achieved, KTR won the assembly seat from Sircilla. KTR is considered to be instrumental in the implementation of Telangana government’s industrial policy, announced in 2015. The IT parks across the state have brought jobs to 8 lakh youth in the private sector. 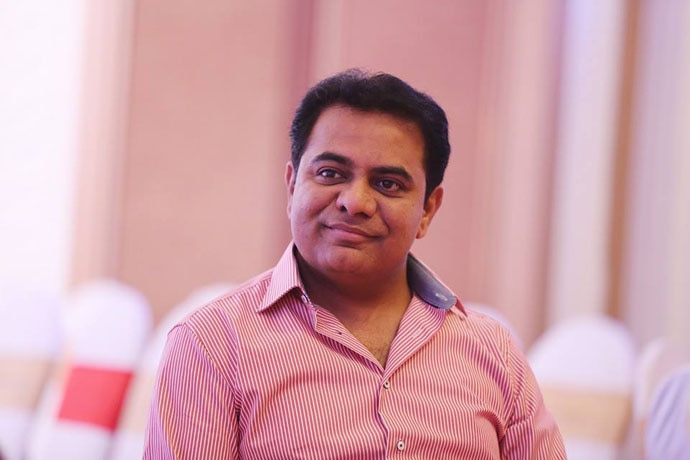 Suave, charming and scion of the Chief Minister, KTR is considered the force behind Cyberabad development. However, his own constituency seems to be crying for attention (Photo: Facebook)

However, KTR’s constituency Sircilla — known for its textile sector — is reeling under power and market crisis. While the government's ‘free saree distribution scheme’ has boosted the industry since last year, it remains to be seen if KTR will implement further policies for his constituency’s benefit.

KCR’s nephew and the state’s Irrigation Minister has one of the government’s flagship projects to his credit. Mission Kakatiya — that was announced by KCR after coming to power in 2014 — was meant for restoring all the irrigation tanks and lakes built over centuries by generations of rulers in the state. These were considered as the lifeline of agriculture in the region, as Telangana is largely arid. From watering KCR's aspirations for Telangana, to being the elixir for agriculture in the state, Harish Rao is often viewed as the rabble-rouser in TRS (Photo: Facebook)

Harish Rao took up the project of de-silting and restoring these tanks. The silt from the tanks (rich in nutrients) was sent to the farmers. The government claims that that the yield for cotton has reportedly gone up by 11.6 per cent, maize by 6.7 per cent and paddy by 4.4 per cent. Since the tanks were restored, the fishes have increased and the fisherman’s income has reportedly gone up by 30 to 35 per cent.

However, there have been rumours of strife between KTR and Harish Rao over TRS’s succession. Harish Rao said in a rally that he wanted to quit politics and it was speculated that he was upset over being sidelined. However, he enjoys the confidence of his constituency — Siddipet — from where he has never lost an election till date.

K Kavitha Rao is the first woman MP from Telangana, the member of parliament's Estimates Committee and the Standing Committee on Commerce, and the head of the Telangana Jagruthi — the cultural wing of the TRS.

She is also the daughter of TRS chief K Chandrasekhar Rao — an identity she prefers to identify with after she has been duly acknowledged for her other roles.

Being KCR’s quintessential bidda (daughter) and KTR’s chellalu (younger sister), politics runs in Kavitha’s blood. A software engineer, holding a masters degree from the University of Southern Mississippi, Kavitha was an important part of the Telangana movement after she returned to her home state in 2004. Being KCR's daughter did not bequeath Kavitha with his political heritage (Photo: Facebook)

However, it was not enough to leave her cushy career in the US behind. She started a chain of beauty salons in Hyderabad for livelihood and jumped headlong into the Telangana movement, and she wanted to contest in the 2009 Assembly polls. However, her father reportedly asked her to prove herself first. Therefore, to get an idea of the socio-political issues, she travelled extensively to the most remote villages of the region — a tour which she claims to be the reason for her understanding of the society.

Kavitha was the primary force behind the agitation in 2010 against Telugu films produced by the Seemandhra lobby with the contention that the movies made by anti-Telangana people (from Rayalaseema and coastal Andhra) will use the revenue from the movies made in Telangana against the formation of Telangana. She, along with her brother (KTR) and Prof M Kodandaram (of T-JAC), was also the face of the 'Million March' that was held during the Telangana agitation on March 10, 2011. The March — that brought Hyderabad to a standstill — was instrumental in jolting the Central government to take note of the issue.

After the formation of Telangana, Kavitha contested general elections from Nizamabad Lok Sabha constituency — under the directives from KCR. She won with a majority and became a member of parliament.

At the state level, Kavitha is considered a pioneer in women’s welfare. She is responsible for reviving the state’s primary festival — Bathukamma — under the Jagruthi’s banner. Bathukamma is a women-centric festival, and Kavitha considers it an opportunity to get women together and help them bond. Considered an excellent orator in Telugu, English, Hindi and Urdu, she campaigned extensively for the party before the polls in December 2018.