Telangana Assembly elections: KCR’s thumping win is a thumbs up for good governance

KCR ensured the Telangana sentiment got rekindled to combat the challenge posed by Chandrababu Naidu. He has also emerged now as a national-level political player.

The Telangana Rashtra Samithi (TRS) has triumphed in the first-ever elections held to the Legislative Assembly of the 29th state of India, registering a resounding victory in 87 out of 119 seats.

Grateful, indebted & Humbled 🙏🙏Thanks Telangana for keeping the faith in KCR Garu & giving us another opportunity to serve you 😊 pic.twitter.com/nSwnaLz8z2

TRS supremo Kalvakuntla Chandrashekar Rao's (KCR) strategy to advance the elections, by having the Assembly dissolved nine months before its term, paid off rich dividends. The so-called grand alliance or people's alliance, the Praja Kutami, stitched by the Telugu Desam Party (TDP) president and Andhra Pradesh chief minister N Chandrababu Naidu has been trampled by the TRS.

The Congress, the TDP, the Communist Party of India (CPI) and the Telangana Jana Samithi (TJS) of Professor M Kodandaram comprised the Praja Kutami.

The doom of the Kutami was portended soon after it was formed, as the coming together of the Congress and the TDP was in itself ominous to the grand old party.

Once the Praja Kutami was formed, KCR converted the narrative by training his proverbial guns at Chandrababu Naidu instead of the main Opposition, the Congress. KCR's decision to dissolve the Assembly and call for early elections has paid off handsomely. (Source: PTI)

KCR ensured that the Telangana sentiment got rekindled and spread like an undercurrent to combat the challenge posed by Naidu.

The TRS boss, who addressed over 85 election rallies, meticulously focused on three issues:

1) The welfare schemes and development works taken up by his government and the promise that he would ensure better schemes for the people if re-elected;

2) The need to keep the TDP away from Telangana politics, asking whether the people needed Naidu anymore in the state;

3) How Naidu was working against the irrigation projects of Telangana;

As a result, the TDP, which contested 13 seats, was restricted to just two seats.

The TRS successfully won the confidence of the migrant population (called settlers), especially those from Andhra Pradesh who had settled in Hyderabad. KCR hauled Naidu on the coals for driving a wedge between people and stoking fear among the ‘settlers’.

By decimating the five-member BJP in the Assembly polls and limiting it to a solitary legislator, KCR also signalled to the BJP — and to the nation — that he was not going to kowtow to the politics of the BJP. The coming together of the Congress and Telugu Desam Party (TDP) failed to impress the voters. (Source: PTI)

KCR could get the entire Muslim minority vote bank towards his side with a slew of welfare measures. As if to give this further fillip, he openly aligned with the All India Majlis-e-Ittehaadul Muslimeen, which won seven Assembly seats.

Though Professor Kodandaram played a crucial role during the Telangana agitation, his TJS turned out to be a stillborn baby. It failed to win even a single seat in the Assembly.

The TRS inflicted a humiliating defeat on the Congress, which contested 100 seats, trouncing a large number of its aspirants eyeing the top job of the chief minister.

Though the Congress felt Revanth Reddy, who was the principal accused in the infamous 'cash-for-vote case. could be a challenger against KCR, he was edged out with a huge margin.

The Congress, which could only manage to win 19 out of the 100 seats it contested, may have to reconsider its option of staying in an alliance with the TDP, a party founded on an anti-Congress plank by the legendary NT Rama Rao.

Congress president Rahul Gandhi had campaigned in places where the ‘CM aspirants’ of the Congress contested, while Chandrababu Naidu restricted himself to areas where a single community wielded influence. And the self-proclaimed 'star campaigners' of the Congress could not stir out of their respective constituencies.

The icing on the cake for the TRS is the landslide victory of KCR's nephew and Irrigation Minister T Harish Rao, who secured a majority of 1,19,622 votes, said to be a record in any Assembly election in India, and his son and IT minister KT Rama Rao, who secured a victory margin of 89,009 votes. 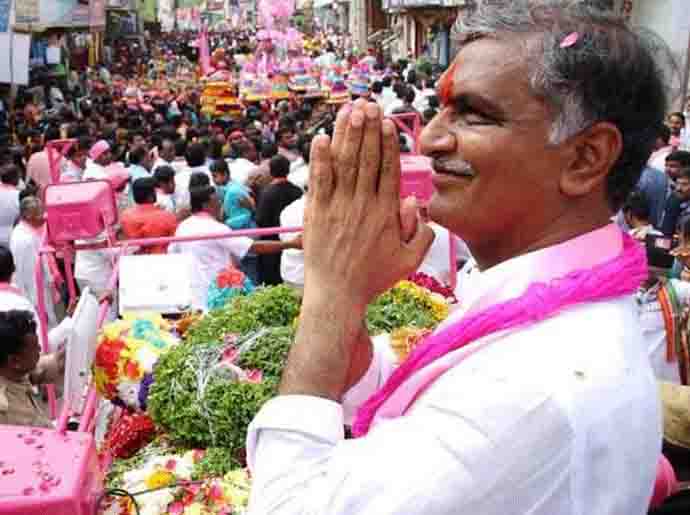 The Kutami lost the electoral battle even before it began as their manifesto was mainly a promise of the continuance of KCR's popular welfare schemes. The four-party conglomerate lacked clarity on what they would have to promise to the people.

The TDP, which randomly won 15 seats in the 2014 Assembly elections, has contested 13 seats in the 2018 polls, thereby indicating that it had thrown its hands in the air before even running the race.

KCR made big promises on the 24X7 power supply and maintaining law and order in the state, which has impressed the electorate. People who benefitted from KCR's welfare schemes rewarded him with a decisive mandate. (Source: India Today)

Attracting marquee companies like Apple, Amazon, Uber, Google, etc., to invest in the state, the KCR government could boast of its investment-friendly policies as well.

As KT Rama Rao said, this was indeed a positive vote for the governance of KCR.

He asserted that the country needed a non-Congress, non-BJP rule — and Telangana would guide the national polity in that direction.

KCR has thus rolled out a broad roadmap for a non-Congress, non-BJP rule, which could be decided by players other than the predictable ones.

Post your comment
#Election results, #Praja kutami, #KCR, #Telangana assembly elections
The views and opinions expressed in this article are those of the authors and do not necessarily reflect the official policy or position of DailyO.in or the India Today Group. The writers are solely responsible for any claims arising out of the contents of this article.