Hyderabad gives thumbs up to KCR and son

With TRS win, Congress, BJP and TDP have been left badly bruised and reduced to single digits in the recently conducted municipal elections.

The ambassador car stopped tantalisingly short of the 100 mark but its owner, KT Rama Rao, the man in charge of the Telangana Rashtra Samithi (TRS) campaign, is without a doubt, the man of the match of the Greater Hyderabad municipal elections. The MIM is a distant second at 44 with the three national parties - Congress, BJP and TDP (since Telugu Desam also calls itself one now) badly bruised and reduced to single digits.

Why did Hyderabad usher in an electoral tsunami for the TRS? Except for the MIM bastion, which was not breached (it won one seat more than what it won in the 2009 polls), the TRS drove into every other pocket, including the areas with a high Seemandhra population, derogatorily referred to as “settler pockets”.

Though the Hyderabadi voter disappointed in terms of polling percentage, recording only 45 per cent voting, the message was loud and clear. If only the parties care to listen.

The loudest message is for the Congress, which had won more than 50 seats in 2009 and was ruling the GHMC in an alliance with the MIM. That it was reduced to just two seats, shows a paucity of leadership, which is seen as extremely compromised in Telangana. Its own cadre talks openly of its leaders having more than a friendly relationship with chief minister K Chandrasekhar Rao and dub some of them “KCR's leaders in the Congress”. Its leader in Hyderabad, Danam Nagender, was himself till the last minute negotiating a crossover to the TRS and only when it did not happen, did he lead the party in the Hyderabad elections. In the political theatre of Hyderabad, Congressmen themselves treat the party like a stepney. What's more, the party leaders were more busy marking attendance during the two visits by Congress vice-president Rahul Gandhi to the Hyderabad Central University to express solidarity with Rohith Vemula's family. In the end, all that chest-beating for the Dalit cause did nothing to the Congress kitty.

The BJP that was at the receiving end of the political chorus at the university, fared no better. BJP leaders blame it partly on the fact that their tallest leader Bandaru Dattatreya found himself at the centre of the Rohith Vemula storm and could not mobilise funds or campaign effectively. The party needs to realise that, like the Congress, its present crop of leadership does not inspire voters to plump for the lotus. It is a party whose strength is overhyped.

The worst off has been the Telugu Desam. “I created Cyberabad”, “I made the Hyderabad airport”, “I made the flyovers”, “I made the roads” - that was the nature of the TDP narrative. To an extent, you can accept Chandrababu Naidu saying those words because he is credited with the city's development post-1995, when he was the chief minister. But the guest appearance nature of his son, Nara Lokesh who was the lead campaigner did not cut ice with the voters. Twitter barbs, new-gen politicians need to understand, do not win you votes in an election.

Worse, the party's image is so badly bruised in the cash for vote scam that people do not believe in its holier-than-thou talk any more. Moreover, its presence as the party in power in Andhra makes it convenient for KCR to take potshots and ask Chandrababu Naidu to take care of cities in Andhra Pradesh and leave Hyderabad to him. Naidu himself did not appear enthusiastic to campaign in Hyderabad.

The voters were also conscious of what happened post the assembly polls of 2014. In the past 18 months, the TRS has admitted a number of TDP and Congress leaders into its fold and therefore voters did not see much sense in voting for parties whose winning candidates will only cross over to the ruling party.

Admitting such politicians, to my mind, should have been avoided by KCR and KTR. They call it “political realignment” but the party gains nothing much in terms of image by admitting city leaders who have a shady reputation and lack vision about Hyderabad's development. 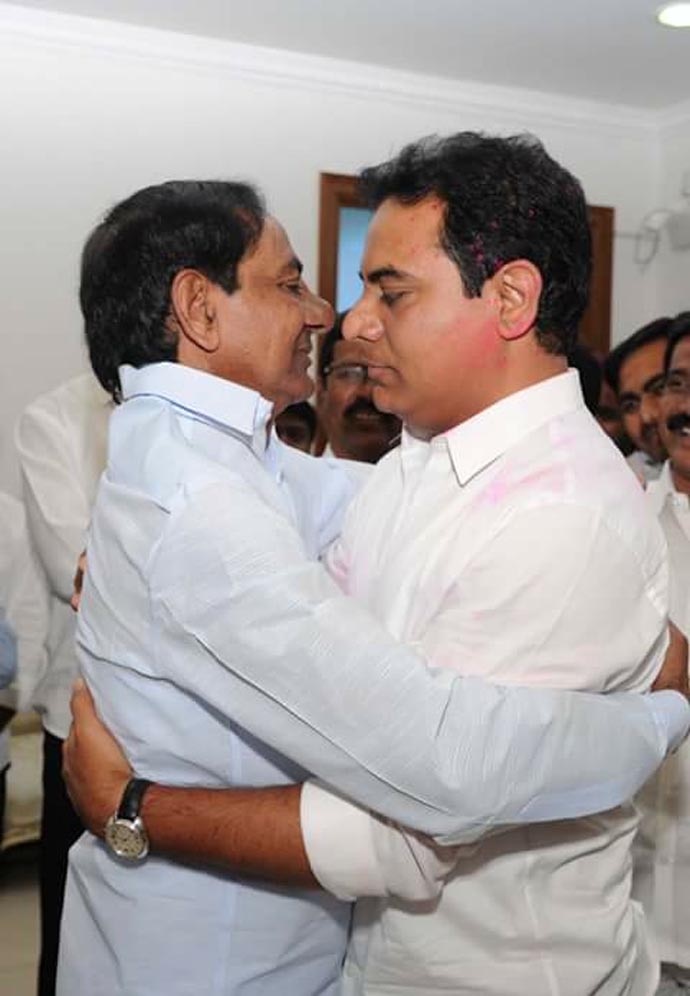 But what worked for the TRS was astute planning, great leadership, good political marketing and promises that appealed to the middle-class voters. The promise of two-bedroom houses was a winner all the way. Projecting KTR as the urban face of the party was a smart move as the 39-year-old is articulate in English, Telugu and Hindi and does not duck uncomfortable questions. He appeals to the young tech-savvy crowd by personally attending to problems and complaints on his Twitter handle. He has redefined governance by being accessible and he is the template for the rest of the cabinet to emulate. As IT minister, he was able to breach Cyberabad, that for years Naidu considered his pocket borough.

His sister and Nizamabad MP Kavitha was a good ally to have, when it came to connecting with the voters. Like KTR, Kavitha has an amazing ability to reach out to voters with a body language, that is warm and friendly. None of the opposition leaders in other parties, barring the Owaisi brothers, can claim that level of affability.

While the Owaisi brothers were able to guard their turf, they will no longer rule the city like they did in the previous term. It is up to KCR and KTR if they would like MIM to have its candidate as Deputy Mayor of Hyderabad. If that happens, the Hyderabad municipal council will be like Delhi Assembly, without an opposition.

But more than the political fallout, the messaging from this election is most important. During the agitation, KCR's slogan of “Andhra waale bhaago” had scared those from Seemandhra, living in Hyderabad. Which is why they invested electorally in 2014 in TDP-BJP. The past eighteen months have buried those fears prompting the trust in the KCR family. Most Hyderabadis have voted in this election for the family rather than individual ward candidates of the TRS.

The TRS has promised the moon to Hyderabadis if it is elected to power. Now that the citizens have done their part by filling the Ambassador car's tank, the time to deliver good mileage has begun.

#Telangana Rashtra Samithi, #KTR, #KCR, #Greater Hyderabad municipal elections
The views and opinions expressed in this article are those of the authors and do not necessarily reflect the official policy or position of DailyO.in or the India Today Group. The writers are solely responsible for any claims arising out of the contents of this article.