Three countries have borne the brunt of Pakistan-abetted terrorism — India, Afghanistan and Iran. Can they now forge a common front to fight and defeat the scourge that has taken thousands of lives?

Last week, General Qassen Soleimani, the powerful commander of the Islamic Revolutionary Guard Corps (IRGC), warned Pakistan's Prime Minister Imran Khan and army chief General Qamar Javed Bajwa: "I have this question for the Pakistani government: where are you heading to? You have caused unrest along borders with all your neighbours and do you have any other neighbour left that you want to stir insecurity for? Are you, who have atomic bombs, unable to destroy a terrorist group with several hundred members in the region?"

Iranian authorities claim there were three Pakistani nationals among the terrorists who killed 27 Revolutionary Guards on a bus on February 13 — coincidentally, just one day before the Pulwama attack that killed 40 CRPF jawans.

The two countries share restive ethnic Baloch populations on both sides of the border. Responsibility for the terror strike on Iran's elite Revolutionary Guards was claimed by the Jaish al-Adl militant group which has bases in Pakistan.

Iran's supreme leader Ayatollah Khamenei displayed his anger with Pakistan by authorising his top aide Major-General Yahya Rahim Safavi to convey a tough message to the Pakistani army: "These criminal outlaws are from one of the tribes of Balochistan who had been trained in suicide operations in the neighbouring country, and the neighbouring country and the ISI should account to the Iranian government and nation and the IRGC for how they have crossed the borders of that country and why this neighbouring country has turned into a safe haven and a place for training and dispatch of these infidel terrorist groups (to Iran)." 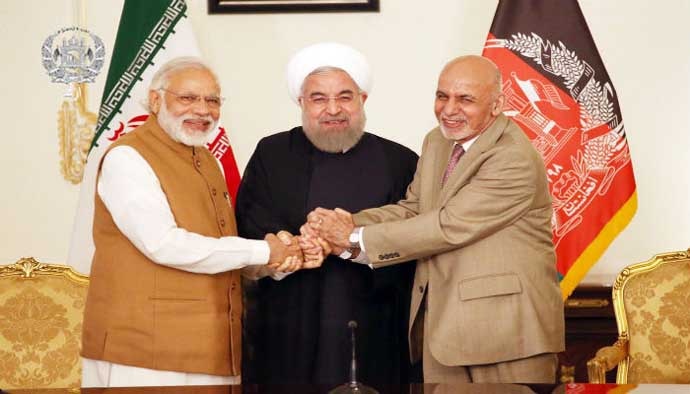 Not only Chabahar — These three nations can also agree on the crucial common factor of fighting terror from Pakistan. (Photo: Twitter)

The elite IRGC is the bulwark of Iran's security forces. Its commander, Ali Jafari, was even more direct in warning Pakistan: "Pakistan should know that it should pay the cost for the Pakistani intelligence organisation's support for Jaish al-Adl from now on and this price will no doubt be very heavy for them."

Pakistan has over the years been careful to mollify Iran, even as it slides deeper into Saudi Arabia's embrace. Shia Iran and Sunni Saudi Arabia are locked in an attritional geopolitical battle over the Middle East. Pakistan is Sunni-majority — but it has a significant Shia minority that it cannot afford to alienate.

After four years of devastating war against the Houthi rebels (a Shia sect), the pan-Islamic army has failed to make headway amidst growing anger in the West (which armed the Islamic coalition force in the first place) over human rights abuses.

Pakistan's bankrupt treasury increasingly relies on Saudi bailouts — making Pakistan a quasi-satellite of Riyadh. This has strained Islamabad's ties with Iran and made the Pakistan-Iran border fertile ground for Pakistan-based terror groups.

Afghanistan meanwhile continues to reel under suicide terror attacks by the Taliban, which has sanctuaries in Pakistan. Rahmatullah Nabil is the former head of Kabul's intelligence agency. He is one of the contenders in Afghanistan's presidential elections due in July.

Nabil recently claimed that Pakistan shelters and supports as many as 48 terror groups on its soil: "Pakistan has been using terrorism as a tool and tactic. India should have done this (Balakot strikes) much earlier. I hope Iran will also take action against Jaish al-Adl. Because if the US leaves the region — and we hope they leave behind a good legacy — but if they simply withdraw, that will give a sense of victory to all terrorist networks not just in the region but on the other side as well." 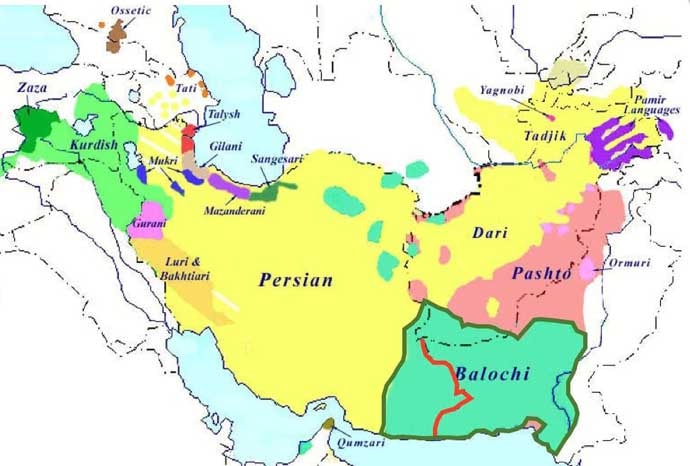 Pakistan and Iran share restive ethnic Baloch populations on both sides of the border. Fears are these are being drawn into terrorism. (Photo: Geocurrents)

India's post-Balakot strategy to defang Pakistan-sourced terror must clearly involve closer cooperation with both Iran and Afghanistan. There is already a sharing of counter-terrorism information between the three countries. But this needs to be upgraded into a structured arrangement.

The most effective counter-terrorism alliance in the world today is the "Five Eyes" network — this comprises the intelligence agencies of the United States, Britain, Canada, Australia and New Zealand. The Five Eyes share intelligence with one another in real time. This has helped avert several terror attacks in the US, Australia and Britain. The coordination between the Five Eyes is seamless.

A similar "Three Eyes" arrangement between India, Afghanistan and Iran could help mitigate the threat of terror attacks in the region.

With the US determined to make a Faustian bargain with the Taliban, Pakistan (which controls and hosts the Taliban) will unleash jihadis on both Afghanistan and India as soon as US and NATO troops withdraw from Afghanistan.

Gautam Mukhopadhyay, a former Indian ambassador to Afghanistan, warned recently that the Taliban's presence in a future Afghan government would be a disaster. Speaking in London at the International Institute of Strategic Studies (IISS), he said that during the current "peace talks" with the US in Doha, Qatar, the Taliban's promised concessions on issues such as women's rights "were just a smokescreen to grab power."

The Taliban's joy may, however, be shortlived — the US has pledged to keep a small contingent of troops behind even after it withdraws from Afghanistan. It will send back a large force if the Taliban does not keep its end of the bargain of renouncing violence in Afghanistan.

The Taliban, of course, will not keep its end of the bargain — Pakistan will ensure that. But with India, Afghanistan and Iran working together as "Three Eyes" on intelligence sharing, the dangers of an increase in terrorism can be mitigated to a large extent.

China and Saudi Arabia, Pakistan's chief financial patrons, have homegrown terror concerns of their own. There is a global threshold for tolerance of terrorism. That threshold has been reached. India's challenge is to make sure the threshold is not breached.

Also Read: India must use every option to cripple Pakistan’s military-jihadi complex now

#Terrorism, #Pakistan, #Pulwama, #Indo-afghan ties
The views and opinions expressed in this article are those of the authors and do not necessarily reflect the official policy or position of DailyO.in or the India Today Group. The writers are solely responsible for any claims arising out of the contents of this article.