Where is the objectivity in The Economist's editorial on ‘Intolerant India’?

While the magazine sweepingly declares that Modi is determined “to transform India from a tolerant, multi-religious place into a chauvinist Hindu state”, it does not explain how India will cease to be multi-religious.

The Economist, in its latest issue, has unabashedly joined the current campaign of opposition circles in India against Prime Minister Modi and the BJP. Western journalists stationed in Delhi, socially comfortable with India’s articulate English-speaking elites who scorn the RSS, become willing participants in relaying the anti-BJP opposition propaganda internationally because what they hear in the circles they mix in accords with their own preconceived notions about a “Hindu” India.

Why we need NRC

When critics within India decry the rise of Hindu nationalism because any Hindu consolidation in India will durably alter the balance of political forces in the country to BJP’s advantage, they get the endorsement from the so-called liberal circles in the West who decry the rise of “nationalism” anywhere because of Europe’s historical experience.

Many expatriate Indian origin writers and academics linked to kindred circles in India feed into the current negative narrative about BJP’s policies being majoritarian, anti-minority and socially divisive. How much they need to assert their liberal credentials in the society they live in search of more esteem, credibility and acceptance can be debated.

The Economist’s editorial on Intolerant India is full of distortions, misrepresentations, half-baked analysis and unwarranted conclusions. It is not journalism but a diatribe against Modi and the BJP. It accuses India of changing the law to make it easier for all except Muslims to acquire citizenship.

This is an entirely misleading statement as the amendment to the law applies only to illegal migrants and is one time in the application, the cut-off date for quicker acquisition of citizenship by non-Muslim illegal migrants being December 31, 2014. After that, no religion is privileged in terms of acquiring citizenship under the Citizenship Act. To say that the BJP looks at the NRC “as a means to hunt down illegal immigrants” is a nasty misrepresentation. Yes, illegal migrants would get identified, but the purpose is larger. India, like its neighbours and others, must have a citizenship roll to cater for the future. 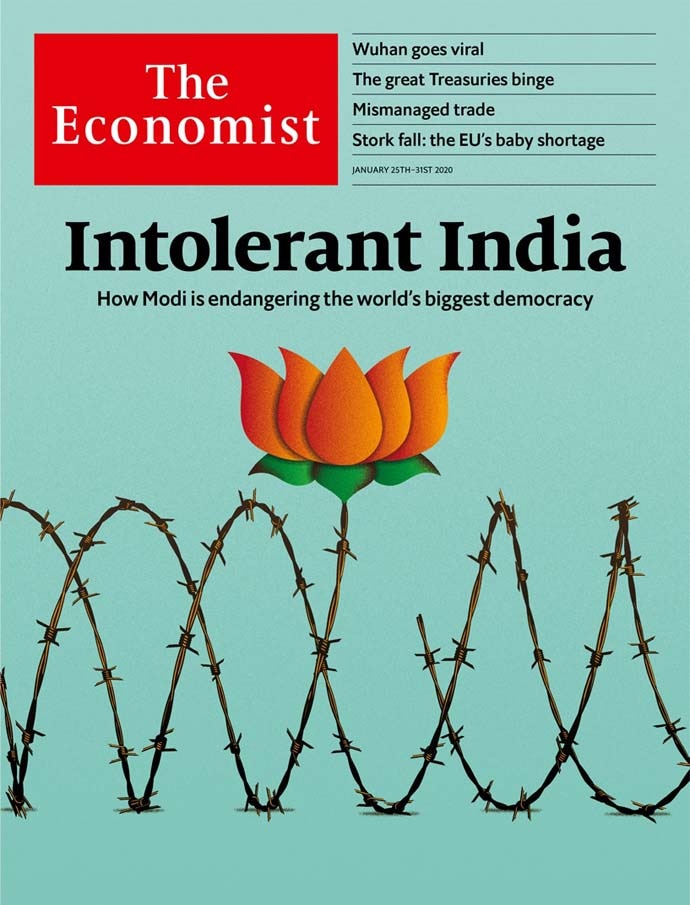 The Economist has joined the current campaign of opposition circles against Prime Minister Modi and the BJP. (Photo: Twitter/ @TheEconomist)

India has thousands of kilometres long undefined or porous borders with three of its neighbours, an open border with Nepal, and an extensive coast-line. It faces cross-border terrorism; the demography of its districts bordering Bangladesh has changed over the years. For improved governance, security, sovereignty reasons and proper targeting of social benefit schemes a national roll of citizens is essential.

The magazine declares sweepingly that Modi is determined “to transform India from a tolerant, multi-religious place into a chauvinist Hindu state”. It does not explain how India will cease to be multi-religious. Will the Constitution be amended, fundamental rights abrogated, judicial independence ended and the media censored?

The Economist links the BJP’s rise to “a decades-long project of incitement”, beginning with the destruction of a mosque by “Hindu extremists” and a massacre of Muslims in Gujarat in 2002 under Modi’s watch which “made him a hero to Hindu nationalists around the country”. Is this journalism or distilled political aversion? “Alas, what has been electoral nectar for the BJP is political poison for India”, it says in a gush of animosity towards the ruling party and its leader. The Economist accuses Modi of constantly insinuating “that Muslims are dangerous fifth-columnists, always scheming to do Hindus down and sell out their country to Pakistan”. Will The Economist list these statements in the interest of honest reporting?

Making the party look like a collection of dangerous political adventurers, the paper claims that the BJP is “hunting for a new grievance”— the citizen-ship issue now that the Supreme Court’s ruling has deprived it of its favourite Ram Temple cause. It is ridiculous for the paper to say that Modi’s policies “blatantly discriminate against his Muslim compatriots”. Can they give an example? How are illegal Bangladeshi migrants India’s “Muslim compatriots”?

That the UK wants to close its borders even to legal migrants from Europe, continues to tighten its immigration laws, and seeks to send back what it claims are 50,000 illegal Indian migrants in the UK, the hypocrisy of this establishment paper is amazing in demanding that India accept millions of illegal Muslim migrants without demur. It talks of the “deliberate and sustained persecution” of Muslims, without giving any proof, no doubt because it thinks that as the lingering voice of British imperialism it owes no explanation to anyone.

In a bid to stoke communal tensions in India, Modi is accused of “rabble-rousing”, of “perpetually firing up Hindus and infuriating Muslims” and thereby making “fresh bloodshed more likely”. India’s Supreme Court has been mocked for not showing spine. The government should think of expelling The Economist’s India correspondent as the paper has gone beyond journalism to playing oppositional politics in India.