The 'idol' way: What we can do for our Hindu causes instead of whining on social media

Another notable triumph was the recovery of a small but precious 12th century Nalanda Buddha.

Years ago, I was stunned to see a beautiful 17th century Ganesha on display at a famous museum in the US with kumkum and chandan (vermillion and sandalwood) clearly visible marks on it.

I mentioned this to one of the curators, pointing out how a statue so recently worshipped was likely to be illegally acquired, if not stolen.

Thankfully, in their zeal to maintain authenticity, both the traffickers and the curators had preserved the tell-tale signs of its possible theft.

The curator shrugged and said, “We can’t say; all I know is that we bid and paid for it.”

Perhaps it's time you liberated him, then? Let's #BringOurGodsHome. pic.twitter.com/4wXUcpXoyZ

That used to be the fate of many an Indian god or goddess — uprooted, stolen, smuggled, sold, displaced, disgraced, and displayed.

I felt helpless and frustrated. There is a much higher degree of awareness about our stolen art all over the world. (Photo: PTI)

To many unaware of what IPP has achieved, “pride project” might suggest a lesbian, gay, bisexual, transgender, and intersex (LGBTI) initiative.

But IPP fights for the rights not of discriminated or disenfranchised people, but gods and goddesses who have been stolen and trafficked.

IPP is an international volunteer effort to retrieve and restore India’s murtis of deities and divinities. To rescue distressed devis and devatas—what can be more noble or dharmic?

No wonder, unlike other so-called Right Wing (RW) causes, many of which are non-starters or self-injurious, IPP has enjoyed worldwide recognition and success, not to mention unprecedented national attention and support.

IPP’s intervention has been all the more commendable and timely because, on the one hand, Hinduism is abused and attacked the world over, but, on the other hand, there’s a huge demand in the international grey market for its desecrated and pilfered icons. IPP’s endeavour is thus also about restoring pride in and increasing knowledge of our traditions and heritage. A casual web search reveals how well-publicised and recognised IPP’s singular service to this worthy cause is.

Photos of world leaders, including the Indian Prime Minister, Narendra Modi, with recovered Indian art objects and idols, plus coverage in national and international media are just one index of its visibility and success. In fact, Modi has taken a personal interest in this endeavour. Only a dozen or so heritage objects came back between 1947 and 2014, but since 2014, over 27 have returned. This figure may be minuscule, but its symbolic value is immeasurable, perhaps more important than the actual idols and heritage items recovered. 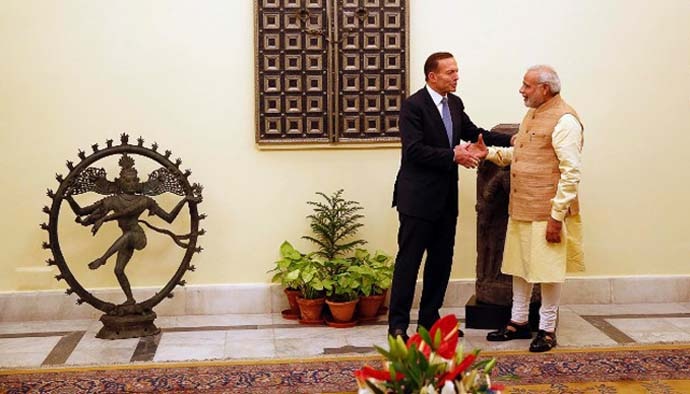 Each stolen idol has its own story, sometimes quite stunning or marvellous, to tell. (Photo: AP)

The latter include the famous Nataraja or “Dancing Shiva” bronze, valued at $5 million, from the National Gallery of Australia (NGA). When NGA denied that they were displaying a stolen Shiva, IPP compared images of the idol with that of the statue on display to prove that it was one and the same.

This fact, publicised in a well-planned and orchestrated social media campaign, helped shame the NGA into returning it. When it was returned, the temple where it belonged, which without its resident deity looked forlorn and dilapidated, was also renovated and restored. The Nataraja statue had been purloined by the notorious Manhattan wheeler-and-dealer in art, whom some would call thief and trafficker, Subhash Kapoor.

Kapoor is now behind bars after a federal investigation nicknamed “Operation Hidden Idol”. Another notable triumph was the recovery of a small but precious 12th century Nalanda Buddha. Stolen from the Archaeological Survey of India (ASI)’s museum along with 13 other icons way back in 1961, it surfaced in an auction in London. Because Sachindra S. Biswas, a former Director General of ASI, had preserved photos of the stolen items, the Nalanda Buddha could be identified and returned to India. In fact, each divinity, in the Hindu view, is a “person”; thus, each stolen idol has its own story, sometimes quite stunning or marvellous, to tell. But the real revolution sparked by IPP’s activism is that all over the world there is a much higher degree of awareness about our stolen art. Even private collections have now been asked to prove the provenance and the legitimacy of their acquisitions.

IPP’s great success may also be gauged by how its efforts have been supported both inside and outside Parliament, not only by the BJP or the Congress, but also by most regional parties including Dravidian parties like AIADMK. Similarly, both mainstream media (MSM) and social media (SM) support IPP.

As co-founder Anuraag Saxena puts it, “Shines as a beautiful example of not just returning heritage to its communities; but of establishing India’s soft power on the global stage.” A Singapore-based Chartered Accountant and MBA, Anuraag focuses on restitutions, advocacy and awareness-building to bring back India’s stolen heritage. When he is not working, “he can be found at stand-up comedy shows or diving.”

RW has much to learn from his methods and ideas: “Imagine the shift in power-equation when Angela Merkel,” he says with a smile, pausing for dramatic effect, “publicly returns a stolen murti to PM Modi. It says you can’t mess with India anymore”.

A comprehensive effort of engaging in policy-making, legislative and judicial processes, as well as narrative building and social media promotions is the way forward, not merely aggression, victimology, and endless whining or outraging on SM.

For Hindu causes, the latter, as he puts it, would only be “suicide by a thousand cuts.”

Also Read: How the Indian President, Ram Nath Kovind's visit to ‘My Son’ in Vietnam is a symbol of soft power