For the third consecutive year, the British will be having a national vote, following Prime Minister Theresa May's decision to call a general election on June 8 – subject to her getting the required approval from Parliament to do it earlier than the fixed five-year term.

Having been crowned prime minister after David Cameron resigned following his defeat in the Brexit referendum, she needs a mandate to both undertake the negotiations that will now take place with the EU to leave the union, and also to sign up to the final deal – if there is one.

With a small majority at present – that is strongly pro-Brexit – and with polls suggesting that she would win a landslide against incompetent Opposition, May sees an opportunity to dilute her party's Brexiteer contingent with a fresh intake of MPs so that Parliament agrees to the settlement that Europe will offer: whatever Europe offers will be intolerable to the Tory Right, and their influence must be weakened for any agreement to happen.

After taking office, she very shrewdly handed the posts most publicly associated with Britain's post-European future to her party's most ardent right-wingers. Boris Johnson became foreign secretary, Liam Fox was put in charge of international trade, and David Davis has been given the duty of overseeing the exit from the EU. 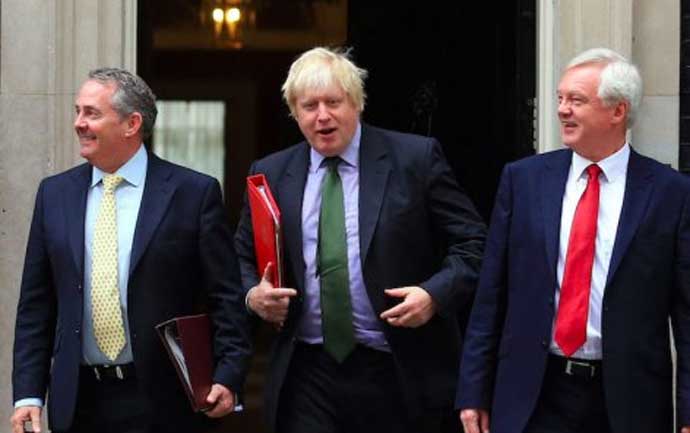 The trio have spent the past year straining for full height 'only to stare the challenge of Brexit squarely in the ankles'.

In the year since, all three have been shown up to be wholly inadequate for their roles and seen their cherished fantasy of a resurgent independent Britain turn to ordure in their hands. As one columnist for the Financial Times described them, the trio have spent the past year straining for full height "only to stare the challenge of Brexit squarely in the ankles".

Despite their wild claims that the UK would be able to set its own terms with the EU, and that the rest of the world – especially India, for some mysterious and never explained reason – was desperate to sign trade deals with it, these three clowns are now confronted by the reality of the EU, a global economic superpower with a GDP seven-times larger than Britain's, playing a brutal game of hardball – presenting a £50 billion divorce bill before trade talks even start – and a world that is indifferent to the British and what they have to offer.

Like the vast bulk of Brexit supporters, these three men – constipated by imperial nostalgia and delusions of national grandeur – cannot admit to how utterly clueless they are about the world and Britain's place in it. They are happy to leave the EU without any deal whatsoever, with all the chaos and disruption that will bring to everything from food prices to airline flights and the importation of uranium for nuclear reactors.

And it is to water down the lunatic influence of such people in Parliament that Theresa May, I think, has called this election.

On April 29, the EU will convene to decide its collective position in negotiations with Britain. They are already strong-arming the UK by supporting Spanish claims on Gibraltar and sending signals that Scotland could easily rejoin the union should it secede from the UK. Their final proposal will be one that very much protects their interests and impinges on Britain's.

It will be a take-it-or-leave-it offer that Brexiteers will be appalled by, but which the country, having no alternative, will have to accept. But the swallowing of this bitter pill can be made much easier if May can claim a mandate for handling the Brexit negotiations and has a large enough majority in Parliament to vote it through.

Holding yet another election is the only way she will achieve this.

Also read: Theresa May can help Britain save face after Brexit