The ambitious plan will obliterate over 200sqkm of the Panna tiger reserve and all the wildlife within it.

Meet "P5II1", as this month-old wild tiger cub ventures out for the first time from its enclave, to peer curiously into its vast forest home of Panna Tiger Reserve (Madhya Pradesh). Take a good look. Chances are that this cub may not live through to adulthood, with Panna earmarked to be submerged by the first of India's ambitious - estimated at Rs 5,60,000 crore at 2002 price levels - river linking project, the Ken-Betwa link, scheduled to be initiated in December 2015.

The entire project is located within the reserve, directly submerging 89sqkm. Over 58sqkm is in the core critical tiger habitat, deemed to be inviolate and sacrosanct as per law. The impact area will be far greater - construction, quarrying, mining, blasting, staff colonies, power houses etc will disturb, dissect, disembowel, obliterate over 200sqkm of the tiger reserve, and all the wildlife within it. This includes over a dozen tigers, including breeding tigresses. In fact, nearly half of Panna's breeding tigresses reside in the submergence area.

We know tigers are rare, critically endangered and hence precious. The tigers of Panna are, in a way, even more special. After Panna's tiger extinction debacle in 2009, (mainly due to poaching, compounded by the management's denial of accepting the crisis), the population was rebuilt. In an unprecedented exercise, tigers were translocated from other reserves in Madhya Pradesh. The Panna team (which also includes its elephants!) worked 24x7 to protect and monitor the tigers, and keep them safe. 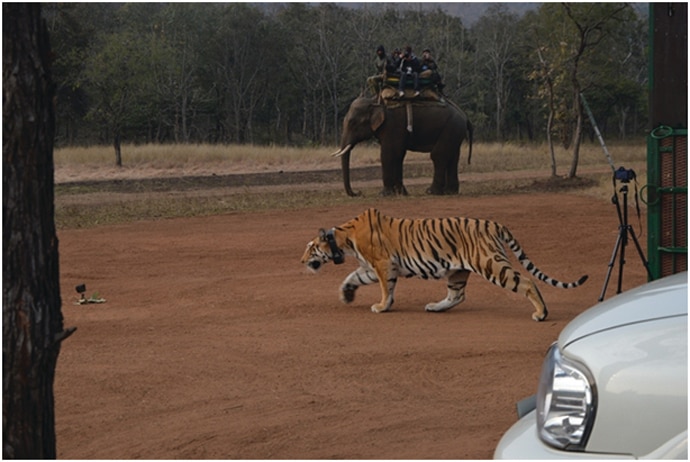 'T6' being released in Panna.

Their dedication was rewarded when the tigers bred, raising cubs - and the next generation of Panna's "new" tigers. From zero, there are 32 tigers in the reserve now - and they are chartering new territory, dispersing outside and populating the landscape. There is no such parallel in the world. Panna's success has won it international fame, and is cited as a model for conservation success. 'T1', the first tiger to be translocated (from Bandhavgarh), with her first litter in April 2010

There has been a similar effort in Sariska (Rajasthan) after tigers went extinct in 2005, but due to extreme disturbance and pressures in the park, progress has been slower.

The Panna project cost the public exchequer Rs 478 lakh over five years. It will all go to dust - the expense, the effort, and the pride of this extraordinary achievement.

It is not just tigers that the project will sink. The reserve has other rare wildlife-including critically endangered vultures, caracal, wolves, chousingha, sloth bears, leopards, pangolins-who now face an equal risk. The critically endangered Long billed Vulture nests in the Ken river valley, which will be submerged.

The proposed reservoir, the canals - a network of 221 km - and the ongoing construction will wreck crucial wildlife corridors towards the south and south-west. Tigers regularly use these corridors. One example is "T3" who travelled about 450 km through three districts towards Pench Tiger Reserve which was his original home, thus showing us that tigers have a homing instinct.

Meanwhile, atleast four tigers traversed the south-west corridor through the patchy forests of Gwalior-Jhansi-Lailtpur. Among them was tigress "P222", who eventually had her cubs on the park's south-western tip, reiterating the critical importance of the connectivity this corridors provide. If you think drowning tigers is of little concern, then consider the fact that its forest is the catchment of the perennial river Ken, which feeds three districts downstream. This Yamuna's tributary harbours the ghairal, mahseer fish (called the tiger of the river) and other endangered aquatic fauna. The perennial river Ken, the lifeline of Panna Tiger Reserve, and its surrounding districts.

Ken is the lifeline of the tiger reserve's ecosystem, and also millions of people of Panna and its adjoining districts. It will affect the livelihood of fisherfolk and farmers. Experts opine that the river Ken falls short in meeting the water requirements of the people along its course, so how is it expected to have excess water to feed another river?

On a recent visit to the region, I found a palpable anger among the people that the project will seek to transfer the Ken water to irrigate Bundelkhand districts in MP and Uttar Pradesh, even as they are water-starved.

This unrest has the local leaders worried, even as the project is backed by the chief minister Shivraj Singh Chauhan and the union minister of water resources Uma Bharati. At a function in Panna on November 1, Madhya Pradesh Foundation Day, state cabinet minister Kusum Singh Mahdele said that Panna Tiger Reserve could not be compromised at any cost, echoing the sentiment of the local BJP leader Sadannand Gautam who questioned the wisdom of the riverlink, and its fatal impact on the reserve.

Backing them were the children of Panna who rallied for their tigers, whose forests "gave them water and fresh air, and had made their town famous!" 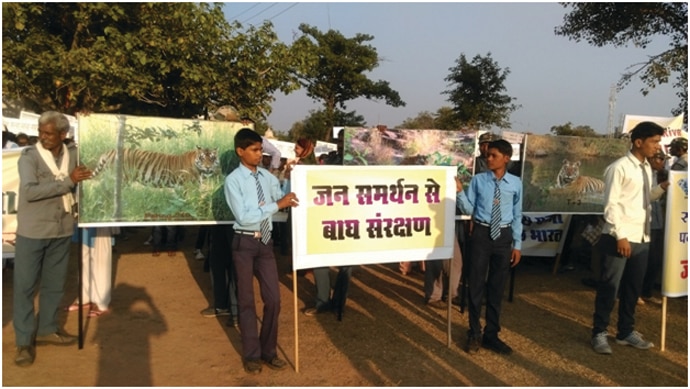 Panna's children rallying for the tigers

Regardless, the river link project is on a fast track. The state pushed to denotify 90 sq km of the Panna National Park through the State Board for Wildlife in its September 12 meeting, in spite of stiff opposition from non-official members who warn that the project will mean the end of Panna. In a strongly worded dissent note two non-official board members, including India's former secretary, environment and forests said, "The state and the nation will have to decide whether to have the project or the park, we cannot not have both."

The irony is that such monumental decisions which lay to waste our natural heritage and destroy livelihoods, is based on shoddy environment impact assessments. This project's EIA is a "shining" example. It omits to mention endangered species in the Ken river basin, noting that "the submergence area is neither home nor important habitat for wildlife or birds". The tigers, leopards, vultures, gharials etc, obviously do not matter. Instead, the EIA report discovers new species in the park - the slow loris (residents of evergreen forests in the north-east), Manipur brow-antlered deer (very obvious where it is found, except to the "learned" EIA consultants!) and describes Panna as a sal forest (it isn't). The EIA report also finds that the project will be beneficial to the fish as it will give them a "shortcut" to migrate through the canal!

If it weren't so tragic, it would be funny.

It is also proposed to "mitigate" and "compensate" Panna's loss by adding Nauradehi, Rani Durgawati, Ranipur and Mahavir Swami wildlife sanctuaries as "satellite cores" of the reserve. But these are already sanctuaries - no new area is getting protective cover. How will these satellites survive if the main forest - Panna - and connecting corridors are pillaged? Rani Durgawati, for instance, is a tiny 25sqkm park - and about 150km away from Panna, with increasingly fragile connectivity.

And how does one "compensate" for pristine forests, gorges and grasslands that will be submerged and destroyed? Consolidating tiger habitats is the need of the hour, but no amount of "compensation" can alleviate the damage of drowning Panna's heart.

As we well know, it will simply mean the end.

#Ken-Bitwa project, #Panna tiger reserve, #Tigers
The views and opinions expressed in this article are those of the authors and do not necessarily reflect the official policy or position of DailyO.in or the India Today Group. The writers are solely responsible for any claims arising out of the contents of this article.