You can't be the new TMC, BJP: A line of Trinamool leaders joining the saffron party is not good news

That Trinamool is in shambles is clear. But how is an exodus of its controversial leaders going to help the BJP? Specially when none of them claims to follow BJP's ideology?

Soon after the results of the 2019 Lok Sabha Elections were declared, BJP’s Bengal leader Mukul Roy claimed that many Trinamool leaders were in touch with him — the Mamata Banerjee government was apparently in crisis. The government eventually could not be toppled — but the mood of the state became clear.

Top guns, like former Kolkata mayor Sovan Chatterjee, exiting Trinamool would make you believe that it’s only a matter of time the incumbent party crumbles to dust.

But there’s more than what meets the eye here.

And the BJP must not dismiss these readings as red herrings. 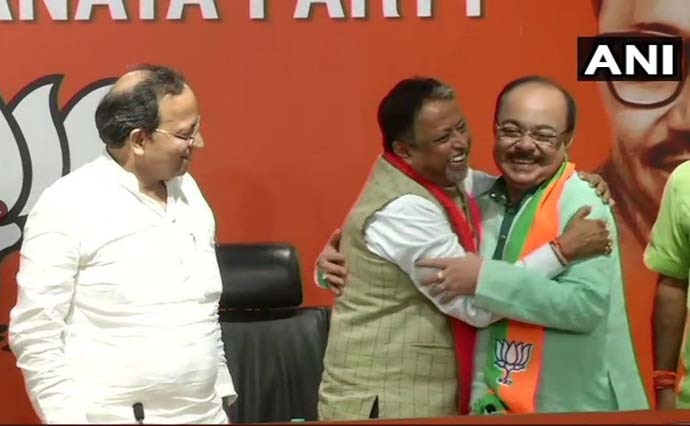 Long-lost friends: Both Mukul Roy and Sovan Chatterjee left Trinamool because they fell out with Mamata Banerjee. (Photo: ANI)

Two scams rocked West Bengal: Saradha and Narada. The first one was a chit fund and the second one was a sting operation exclusively conducted on TMC leaders. Mukul Roy and Sovan Chatterjee were also questioned with regard to both the cases. The BJP had a very simple claim to make then — everyone in Trinamool is corrupt.

But the party must think of an alternative narrative now as those reportedly ‘corrupt’ politicians can’t be poster boys of the BJP’s anti-corruption poll plank.

Think of Birbhum’s Manirul Islam who has joined the BJP, triggering a storm within the party as to why it has accepted someone who is a history-sheeter.

As far as Mukul and Sovan are concerned, yes, they fell out — quite famously — with Mamata Banerjee.

Mukul Roy joined the Trinamool when it was formed in 1998. He was with Mamata through the thick and thin of her journey. Their equation started taking a bitter turn though as Mukul’s clout in the party as her second-in-command began to recede in the shadow of Mamata’s nephew, Abhishek Banerjee's, political rise.

It was a similar story with Sovan Chatterjee. He was an old-timer of the Kolkata Municipal Corporation and became the city's mayor in 2010 when Trinamool won the Kolkata municipal elections. He retained his position in the next election as well. But then, the waters turned muddy as his alleged extra-marital relationship with Baishakhi Banerjee (who has also joined the BJP) soiled his political career. His equation with Mamata turned sour. He had to resign from his posts as the alleged scandal could pose a bigger challenge to the Trinamool’s reputation.

Trinamool has no place for its old-timers. That’s what Sovan Chatterjee reportedly said after joining the BJP. He is not the first one to have said something like this. Trinamool is also not the first party to have faced this allegation. A number of leaders who jumped ship alleged that they were sidelined in Trinamool 2.0, unofficially helmed by Abhishek Banerjee now.

Interestingly, no one has claimed a deep allegiance to the BJP’s politics or the RSS’s ideals.

The BJP can overlook these factors for the time being, as long as its strategy of weakening the Trinamool steadily gets served.

But not for much longer.