Lok Sabha 2019: Why I think the Congress is making an error by fore-fronting Priyanka Gandhi

The climate is politically charged! In the capital city and other political hotbeds, there is an attempt to turn up the electoral heat — but there is also a collective shiver in people like us about what lies ahead, who will be in power soon, and, more importantly, what will they bring to the table in terms of welfare, advancement and growth once they get the new reins of power handed to them?

The air around politics is indeed as heavy and murky as Delhi’s ‘very poor’ AQI. And, ironically, ‘we the people’ have not much of a clue as to which way precisely the wind is blowing.

There are conspiracy theories being spun with feverish frenzy. 'Mahagathbandhans' are being churned out with as much gusto as was apparently put in during the mythological 'manthan' of the grand 'samundar'. Then, there is the great Modi wave. And there is also a growing ‘Modi-no-way’ wave. The fervour around the military and the recent air-strikes is a whole different saga in itself.

Amidst all this, the been-there-done-that grand old Congress is propping up its babalog and babylog like never before, clearly trying to give the upcoming polls their all, and scramble back into the general reckoning.

The Congress' trump card so far has been that of the arrival of Priyanka Gandhi Vadra.

But, observing how things look, I personally think fielding Priyanka as the Congress' great hope is a terrible plan. 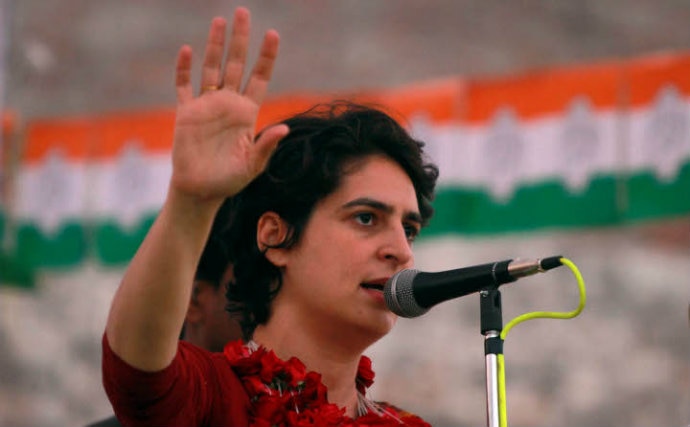 Pause the plunge? Perhaps it's time to stop and think. (Source: PTI)

I am essentially apolitical and have no allegiance to any political party. I only support ideologies and people who can do something coherent and tangible for our country — the rest is simply hogwash for me.

Given this single-point focus, I feel the Congress forefronting Priyanka is a poor idea.

Any attempt to bring Priyanka into the picture drags the dragon of dynasty in as well yet again. Any sane, balanced person knows that a modern, democratic country simply cannot be treated as a fiefdom. We should collectively stop mocking the essence of democracy by encouraging hereditary politics. This sort of colonisation in fact should become a thing of the past.

Up until now, Priyanka has apparently shown hardly any interest in hard political life. She has not chosen politics as her profession. She has helped her mother and brother in campaigning, yes, but not in the tough challenges of daily political life. Given this, why assume things will be very different now?

The Congress has burnt its proverbial fingers earlier when pushing someone to assume a role when they have apparently not felt an internal pull towards it.

Dr Manmohan Singh, of whom I am a fan, has been a great economist, intellectual and scholar. What Dr Singh achieved under the Narasimha Rao regime is written in golden letters — but what Dr Singh did under Sonia Gandhi is utterly miserable and in fact, in my view, quite forgettable.

The great economic mind, whom Barack Obama and several other global leaders looked up to, got reduced to a cruel caricature in Indian politics. He and his genius could have been used for great things towards the country. Instead, he was reportedly shoved into the role of a “seat warmer.”

The Congress' core focus still seems to be getting Rahul to power. So, why would the Congress repeat the folly of using another to do so? It goes beyond my reasoning or comprehension. 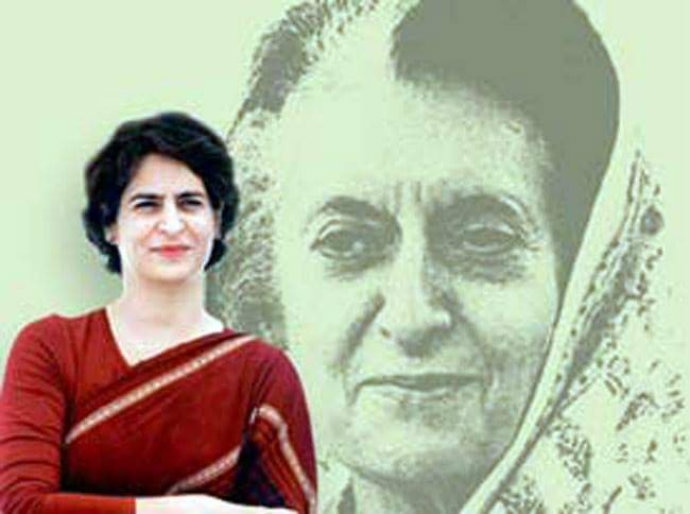 For party fanatics, it is the 'Indira likeness' that is creating a wave of sycophancy for Priyanka. (Source: IndiaToday.in)

Priyanka may be an Indira lookalike — but she is no Indira. The latter was tutored on the intricate nuances of politics in the very fine political climate that existed at that time, from a very young age and intensively at that. She learned the ropes of the trade from no less than her statesman father and cut her teeth in politics early on, taking on formidable challengers, fighting it out alone initially and triumphing against tough odds to rise to power.

If anything, Priyanka appears to show the same sentiment. Why can't her party just respect that?

In the party and in the minds of the party fanatics, it is the seeming Indira likeness that is apparently creating such sycophancy towards Priyanka. In my view, she is being seen as the mythic Joshua by her flock — but what if she may turn out to be more akin the ever-embattled Moses, failing to herd her people into the Promised Land?

Outside of her party and party followers, Priyanka is seen as a complete greenhorn. She is viewed more like a 'Lutyens’ resident' than as the denizen of a country whose hinterland holds its heart.

She is seen as having been fairly oblivious to the goings-on of the Congress in its UPA years particular and political matters in general. This impression works against her far more in fact than against her mother who is seen as having made a major effort to school herself in India's rough-and-tumble politics. 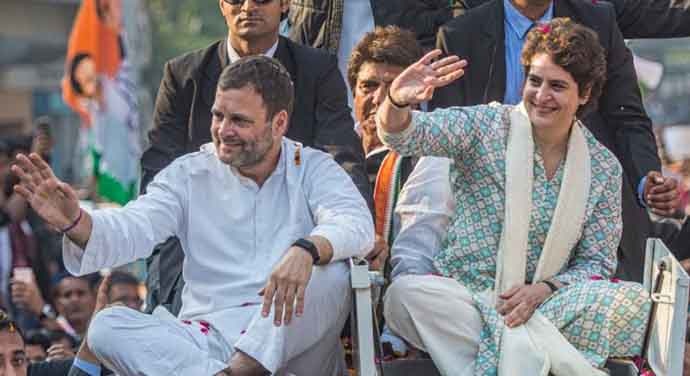 Priyanka has been pulled in primarily, as many view it, because Rahul Gandhi finds himself on a weak footing. (Source: Reuters)

The chief reason for Priyanka’s name to be put up is her family background. The second chief reason is the weak footing her brother, Rahul Gandhi, finds himself on even now. Even though I think he has come a long way, he is still up against a veritable tornado.

But, while Indira Gandhi grew up amidst Jawaharlal Nehru, Mahatma Gandhi, Dr Rajendra Prasad, Sarojini Naidu, Subhas Chandra Bose, Sardar Vallabhbhai Patel, Maulana Azad and a host of such tall luminaries that India has known, Priyanka has grown up in a relatively insulated environment, bereft of any great political thinking and exemplary leadership.

Indira had the legacy of politics handed to her on a platter, yes, but with personal tutorials from the very finest minds of her time; Priyanka has been at a complete disadvantage here.

8.). Country first, politics second, self last — or other way around?

Without being an idealist, and keeping in mind the flavour of petty, self-centred politics that exists around us today, I still feel that it must be country first, political agenda second and only then, the self.

While for most politicians, the order is exactly in reverse, with 'self' being on top, in Priyanka’s case, to many of her critics, it appears like it is only 'self' in terms of the Congress’s premier political family. There seems to be hardly any other agenda. In a tough political fight, why is the Congress limiting its own vision and its own offerings to the voters?

One of the most considerable political handicaps in fact for Priyanka is her husband. Robert Vadra has consistently been named in dubious deals and has the ED perpetually on his case.

For any individual, that is a very big drawback to have — while just beginning one's political innings. 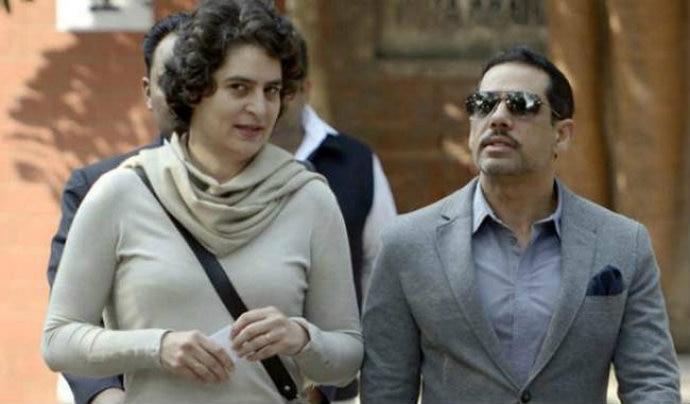 Robert Vadra has been named in dubious deals. How will Priyanka Gandhi deal with this? (Source: PTI)

This is the biggest drawback in the case of Priyanka Gandhi Vadra.

At least Rahul Gandhi has been working hard to brush up his image, be close to the ground, challenge the government, rally the opposition, put his viewpoint across, carry the mantle of his party, be its face in India and abroad, pick up several hard lessons along the way and learn the art and science of politics.

All the hype and hoopla aside, where is the hard experience gained by such groundwork? Before claims are made to an exalted political status, should voters not expect to see at least some years of committed political learning? Even perhaps some service to society?

These, to my mind, are strong enough reasons to explain why the Congress is doing itself a disservice were it to obsessively focus on pushing Priyanka Gandhi as its biggest political draw this election season. But then, this is also the mad circus of Indian politics, riding on emotions, sops, false promises and nostalgia, often much more than on intelligence, reason, realistic expectations and the very reasonable demand to see political duties actually being fulfilled.

In this, despite the disadvantages I have enumerated above, who knows, Priyanka Gandhi too could find some favour. Indian voters, after all, are a naïve, forgiving and often forgetful lot!

Also read: Priyanka, interrupted? How the IAF airstrike has blunted the Congress' ‘Brahmastra’