The saffron party workers can remove statues, but can they erase history?

BJP general secretary Ram Madhav on Monday was gloating in triumphalism over the takedown of a Lenin’s statue from Tripura’s Belonia College Square.

Within 48 hours of notching up a stunning victory in the Assembly elections, Ram Madhav (in his tweet) appeared to suggest, that removal of a life size bronze statue of Lenin was a historical task accomplished. He, however, later deleted the tweet. 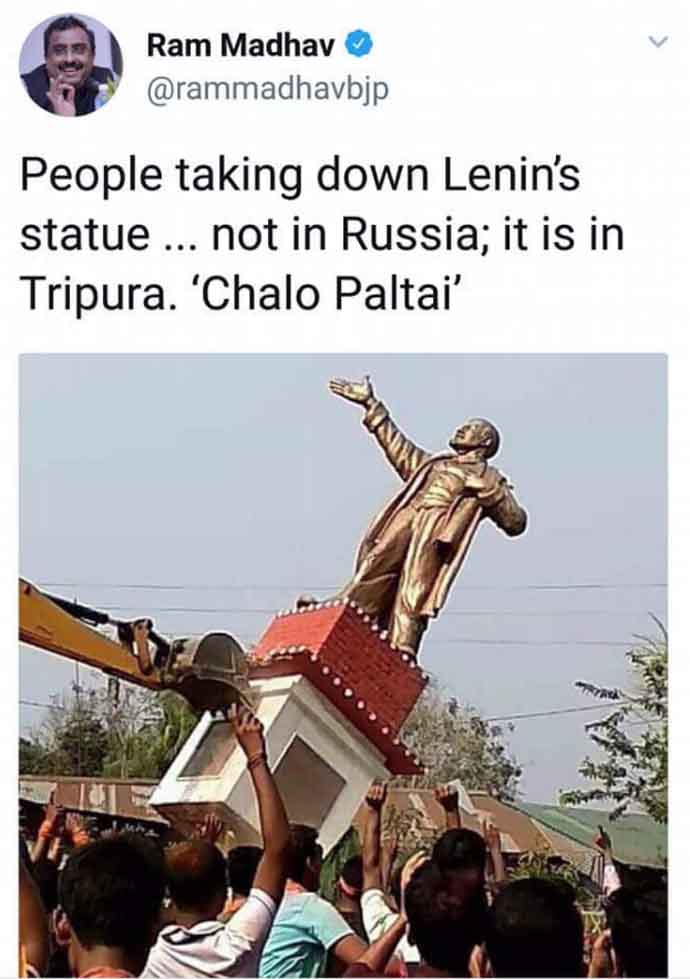 After a storm of protest on social media, home minister Rajnath Singh spoke to the Tripura governor and the state police chief and asked them to ensure peace before the swearing-in of the new government.

BJP spokesman Nalin Kohli offered a poor damage-control defence of what could be construed as instigation to party workers to indulge in vandalism.

“BJP doesn’t ever practice culture of violence. In places like Tripura, Left parties have chosen to be silent about 11 BJP workers who were killed. Some of those who support Left parties are trying to foist these kind of debates that a statue is removed,” Kohli told ANI. 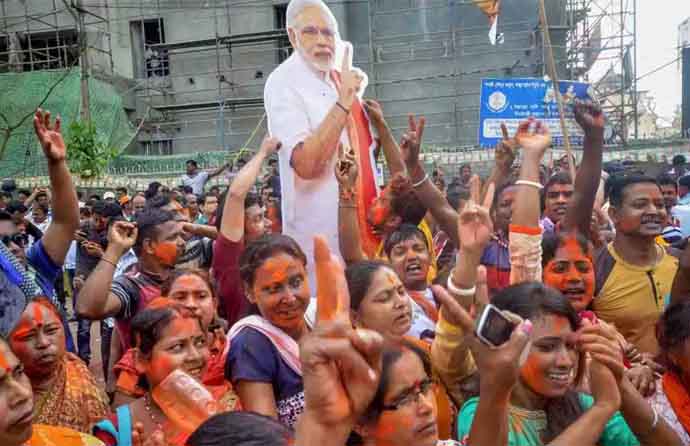 Swamy was more forthright. "Lenin is a foreigner and in a way, a terrorist, there shouldn't be a statue of this sort of person in our country? They are welcome to put that statue inside the Communist Party headquarters and worship it if they so wish," he told ANI.

Statues are inanimate objects. They become important when emotions get attached to them. Inanimate objects turn into living memorials and become part of history and folklore.

BJP workers can remove Lenin’s statue, but can they erase history? The Left Front government that was in power in Tripura for a quarter of a century, in two installments, has been defeated. But those 25 years can’t be erased from public memory and history.

In the current Assembly itself, the CPI(M) represents 45 per cent of the total electorate. The share of votes has not been translated into seats, but that’s a vagary of our electoral system. The BJP can’t erase 45 per cent of the people.

On Twitter and other social media platforms, BJP supporters defended the statue’s takedown by venting their ire against CPI(M)’s foreign-influenced ideology. Lenin, a Russian by birth, has no place on the Indian soil, they argued.

Those very people who get so revolted by foreign influences had organised havans and pujas for the victory of the US President Donald Trump. They thought a new avatar was born in the US who would slay the evil forces residing in the West. The avatar has done no favours to those who sought god’s benediction for him.

The Modi government and the people of India were rightly hurt when Ghana decided in October 2016 to remove the statute of Mahatma Gandhi from the campus of Accra University. More than 1,000 university teachers and academics in Ghana had signed an online petition to their government demanding removal of the statue in protest against what they called Gandhiji’s “racist identity”. The statue was erected there barely a couple of months earlier after the then President Pranab Mukherjee had gifted it to Ghana. Gandhiji’s sculpture was shifted from the university square hurriedly lest it could be vandalised.

As for Lenin and his sculptures, there could be no more alien place to have a status of Lenin than the US, which the BJP the Modi government are so much enamoured of.

This writer was surprised to see a statue of Lenin standing at a prominent public corner in Seattle, the US during a visit there some years ago. The Russian communist revolutionary who is so reviled in the mecca of capitalism has become a landmark in Seattle along with the famous Fremont Troll sculpture in the quirky and artistic neighbourhood of the city.

Lenin’s sculpture is on tourists’ itinerary in the city that headquarters Microsoft, Starbucks and Boeing and is home to the billionaire Bill Gates.

The Seattle city council periodically comes under pressure from the communist baiters to remove the statue. However, there are some who oppose the move. None of those who oppose the removal are communists. Some of them favour seeing Lenin as a relic of the past, some are reminded of the Cold War that tormented the US and some recollect the dreaded years of living under Soviet nuclear arms threat. For some, the 16-foot-tall statute is just an object of curiosity.

Seattle’s Lenin statue has an interesting history. In 1981, Czechoslovakia’s communist party commissioned Bulgarian sculptor Emil Venkov for Lenin’s sculpture that was installed in 1988. In 1989, it was taken down during the Velvet Revolution and was lying in a scrapyard until an American teacher of English Lewis E Carpenter came across it, bought it and carted it to Seattle in 1993. It has been standing in Fremont neighbourhood since then.

Relics of Soviet Union and the most potent symbol of communist ideology, Vladimir Lenin, no longer pose threat to America. The capitalist oligarchy of Vladimir Putin does. The Seattle city council has kept the sculpture on tourists’ must-see itinerary because Lenin poses no threat to the people over there.

But the BJP seems to be haunted by the spectre of Lenin. It has to dismantle sculptures, art and history associated with Lenin lest the politics associated with the relics might come alive.

That’s a possibility the BJP has to contend with.

#Ram Madhav, #CPM, #BJP, #Tripura Lenin statue
The views and opinions expressed in this article are those of the authors and do not necessarily reflect the official policy or position of DailyO.in or the India Today Group. The writers are solely responsible for any claims arising out of the contents of this article.