Will Left be able to survive in India post Tripura defeat?

Marxism has always based itself on theoretical innovations and constant upgradation.

The end of 25 years of Left rule in Tripura was in a sense inevitable. In the past too there have been episodes of Left governments being defeated in states such as West Bengal and Kerala and then coming back to power.

But the 25-year-long Left rule in Tripura was legendary because of prominent leaders such as Nripen Chakravarty and Dasarath Deb Burman, a towering tribal leader who along with others built a tribal-Bengali alliance in the state. The redoubtable chief minister Manik Sarkar has himself become the stuff of legend.

But the loss was inevitable because no party or front can stay in power indefinitely. This is especially not impossible in the presence of a strong Centre sitting on massive revenue reserves, which can be used to wean away the votes of people who hope that voting for the Centre would ensure accelerated development and increased employment.

This has been a major issue in the northeast. The media, gushing over the Tripura loss along with Prime Minister Narendra Modi, hasn't adequately noted that the CPM-led Left Front got 48.11 per cent votes in the 2013 Assembly polls. In the current poll, it got 42.6 per cent votes, a drop of 5.5 per cent. However, because of the first-past-the-post system, the tally of the Left shrunk from 50 to 16 seats.

The largest secular party, Congress, ended up as the biggest loser. In Tripura, its vote share dropped from over 35 per cent to below 2 per cent, and in Nagaland from 25 per cent to 2 per cent. Given that MLAs can be bought and sold and defections are a norm, the Congress is likely to lose Meghalaya too. It's a practice that has gone on forever both with the Congress and BJP governments. And given that the BJP has deep pockets this time, it is only natural that the story will be repeated once again.

PM Modi has boasted that this is an "ideological" victory. Really? Does he mean to say that all communities in the northeast are similar and saffron? Are the Naga Christians Sanghis? Do the tribal people of Tripura and Meghalaya follow saffron Hindutva. 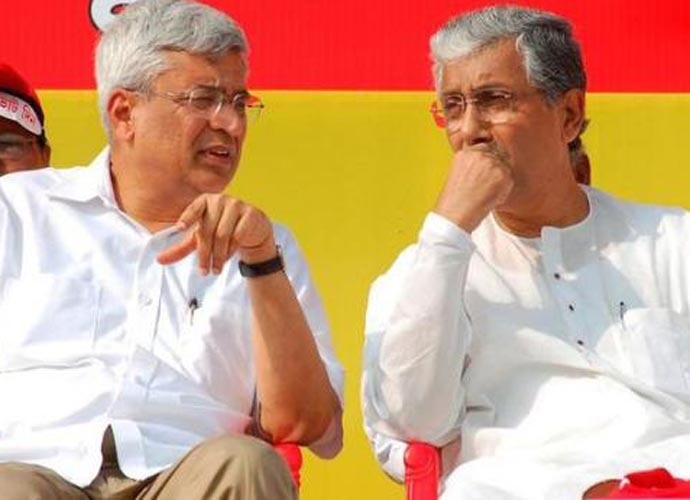 What has happened to the Left

The main story that has emerged in this election is the complete rout of the Left. Due to the entrenched dogmatism in the Left under the leadership of Jyoti Basu and Harkishan Singh Surjeet, the two most powerful leaders of the CPM, Sitaram Yechury and Prakash Karat, chose to eschew power, which they perhaps thought was ephemeral. Currently, there is a power struggle going on within the CPM over possible electoral adjustments with the Congress, which a section of the CPM believes is not much different from the Sangh Parivar.

Electoral alliances with other forces is an issue has bedevilled Left parties globally since the 1930s. In Europe, especially West Europe, there is an increasing tendency to try to forge a plural-secular front in the face of the right wing's stiff opposition to immigrants.

In the UK, for example, Left wing leader Jeremy Corbyn has won over large sections of the working class, immigrants and the youth. United fronts are increasingly the norm in north, central and South America. This is scarcely reported in the print media, but is widely discussed on the social media.

The Indian Left leaders have played down the importance of these strategic alliances and fronts. For example, President Vladimir Putin of Russia approached President Xi Jinping of China, not to have official October (November 7) Revolution celebrations. Russia suggested the Left parties in both countries should rather have smaller events to mark the day. Why? Because there are tonnes of archival documents exposing the two major leaders Joseph Stalin and Mao Zedong. From 1956 onwards, after Soviet leader Nikita Khrushchev's secret report that was highly critical of Stalin, there have been a flood of documents about mass executions, gulags, and forced migration of minority communities. Russian scholars such as Roy Medvedev have calculated that 40 million Soviet citizens died in the purges carried out on the orders of Stalin.

Mao's Great Leap Forward in the 1950s and the later Great Proletarian Cultural Revolution in the late 1960s and 1970s, during which all dissidents including intellectuals were sent to work in the mines, also caused havoc in the revolutionary process. Zhou Enlai protected and supported Deng Xiaoping, who is now revered in China. The China of today has neither radical reforms nor the socialism of earlier times. Though the Russian Communist Party continues to exist, it has only a fraction of the popular support of President Putin's party.

These historic events are given short shrift both by the media and the Left and progressive political parties. But ideologies do not last forever. In a growing number of countries progressive and even Left parties are consolidating. As the Greek philosopher Heraclitus pointed out, "There is nothing permanent except change."

The time for renovation and consolidation for progressive change and rebuilding the Left has come. Will the Left rise to the occasion? If they don't there will be more defeats, more setbacks. Marxism has always based itself on theoretical innovations and constant upgradation. The Left has the potential to support a vibrant, forward looking, secular political theory and movements. This is the need of the times.

Post your comment
#Meghalaya, #Manik sarkar, #Tripura elections, #Tripura
The views and opinions expressed in this article are those of the authors and do not necessarily reflect the official policy or position of DailyO.in or the India Today Group. The writers are solely responsible for any claims arising out of the contents of this article.