Liberals protesting against Donald Trump are being most illiberal

'Protest his presidency for the next four years by all means. But do it with civility.'

“I’d like to punch Donald Trump in the face.”

Guess who said that? A fascist? A right-wing extremist? A white supremacist?

None of the above. The words belong to Robert de Niro, the storied if rapidly ageing actor and a lifelong defender of liberal values — tolerance, democracy and non-violence.

Now, I’m not a fan of Donald Trump. I’ve called him a braggart and worse.

There’s plenty not to like in Trump. His protectionist trade policies are counter-productive. Appointing son-in-law Jared Kushner as senior advisor is nepotism of the kind we have long condemned in Indian politics. And Trump’s misogyny is beyond the pale.

As they say, Trump will make America grate again.

All of this doesn’t excuse Robert de Niro’s outburst or Michael Moore, the filmmaker, saying just after Trump’s inauguration as president last Friday: “We will stop this man. He will not last four years.”

And then Moore delivered his coup de grace to an adoring crowd of protesters on inauguration day, sneeringly calling Trump a “sociopath”.

The comparison between Trump and Modi has of course been overstated. Both are outsiders but have arrived at the top of the political totem pole from vastly different places.

One was born into wealth, the other into poverty. One served as chief minister of a state for over 12 years before becoming prime minister, the other served no elected office before leapfrogging into the presidential race. One believes in open markets and free trade, the other in trade protectionism. One backs rapprochement, the other confrontation, with China.

The one thing Trump and Modi do have in common is the abuse they attract from tolerant, liberal people like de Niro, Moore and, in India, from a hoary cabal of those who think they are liberal, but flout every rule of liberalism.

The first rule is civility. Anyone who uses profanities to describe a person holding an opposing point of view is not liberal. Trump himself fails the test along with his abusive critics. In India, abusers in politics and media on the Left and the Right (and a few in the centre) fail the test too.

The second rule of liberalism is tolerance. Self-declared liberals like actor Shah Rukh Khan, who was banned by the Wankhede Stadium management in Mumbai for abusing a guard, are not role models of tolerance.

The third rule of liberalism is respecting the will of the people. You may loathe Trump – and there are good reasons to do so – but to say he is “an illegitimate president” puts you in the same “basket of deplorables”, to quote Hillary Clinton, as Trump.

Protesters continue to claim that Trump is an illegitimate president because he got 2.1 million fewer popular votes than Hillary Clinton though he won the electoral college comfortably 306-232.

They couldn’t be more wrong. Clinton won the popular vote  almost entirely because of the way California voted, giving Hillary a 2.5 million vote win in that state alone. Take California out of the equation (and keeping even a heavily Democratic state like New York in) and Clinton’s 2.1 million national vote lead vanishes. 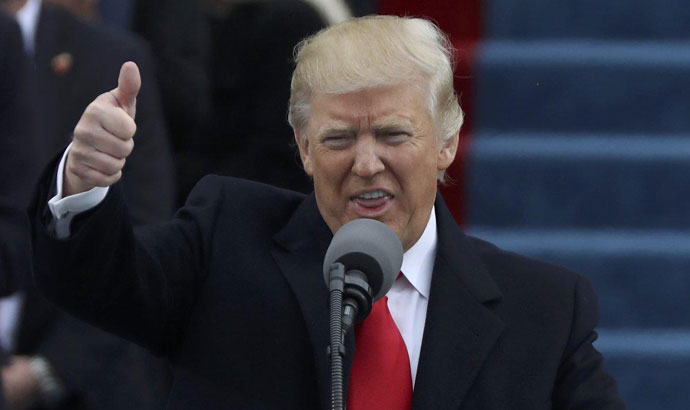 'One rule of liberalism is non-violence. Many protests in America since Trump’s inauguration have been violent, even vicious.' (Credit: Reuters photo)

Protest Trump’s presidency for the next four years by all means. But do it with civility, non violence and respect for the will of the people, also known as democracy.

The final rule of liberalism of course is non-violence. Many protests in America since Trump’s inauguration have been violent, even vicious. Dozens of people and police have been injured. That places the protesters firmly in the same basket of deplorables to which, they believe, Trump belongs.

The Women’s March across 400 US cities and several others worldwide began as a renewed call for women’s rights and gender equality. They quickly morphed into massive anti-Trump rallies addressed by “liberal” celebrities like Madonna who declared on live television that she would like to “blow up the White House”.

While Trump was bashing the US media after his inauguration and was in turn being bashed by it, the rich and the restless in Davos at their annual talking shop were served an unexpected piece of parody.

President Xi Jinping presented China as the “liberal” leader of the new world order, a position the US had held since World War II but, with Trump as an unpredictable president, was about to relinquish.

The humour was not lost on all. China, which blocks Facebook, Twitter and Google, which bullies its neighbours, which doesn’t hold democratic elections, which imprisons dissidents, was in all seriousness setting itself up as a leader of the “free world”.

Such though is the manic despondency among the global "liberalati" at the rightwards lurch of countries, ranging from America and Britain to India and Japan, that they half-believed Xi's fiction.

Meanwhile, the discourse in India has been increasingly illiberal. As a senior journalist wrote in The Hindustan Times on January 20: “The Opposition this time instead is sharply personal, driven by a deep fear and mistrust of the prime minister’s individualistic attitude. Indeed, the language used against Modi is abusive and hate-filled. A senior Trinamool MP went ballistic in describing the prime minister as a ‘son of a rat’. Arvind Kejrival has already call the Prime Minister a ‘psychopath’, but now even Rahul Gandhi has attacked Modi as someone who lies about his yoga skills. The coarse and offensive discourse suggests that the Opposition has run out of fresh ideas to mount an effective challenge to Modi.”

In the US, the Clintons and Bushes have given dynasty a bad name. Barack Obama came as a breath of fresh air, but America’s first black president has ironically left race relations in the US worse off than when he took office eight years ago.

That in the end is what cleared the way for a Trump presidency in 2017 with the aggrieved white vote titling in his favour.

As with Modi, the media – in hock to a discredited, putrefied ecosystem – will criticise Trump’s every move. And it should. That’s what we do in a liberal, tolerant democracy. Without resorting to abuse.

#Liberalism, #Women's March, #Donald Trump
The views and opinions expressed in this article are those of the authors and do not necessarily reflect the official policy or position of DailyO.in or the India Today Group. The writers are solely responsible for any claims arising out of the contents of this article.