What made Trump's India visit a political and diplomatic success

It must go to India's credit that despite his previous track record, Trump didn't embarrass the hosts.

He came. He saw. He conquered! This can be a fitting Shakespearean description of United States President Donald Trump's action-filled 36-hour India visit! Trump, known as the CEO-type transactional President, lived up to his image during his India visit (February 24-26).

Delhi to DC, and back

He came as a politician in search of Indian votes from among the four million-odd Indian diaspora in the US presidential elections in November this year, and he did reasonably well. He chose to ride on his personal chemistry with Prime Minister Narendra Modi and did well in buttering both sides of his toast towards that objective. That explains his eulogies of Modi as "a strong leader", "a tough negotiator" and "a very religious man". In these words, he wrote a blank cheque to the politician Modi which he can encash any time --and encash he will, beginning with the Bihar elections six months later.

Significantly, Trump extended a rare favour to Modi. Something what he doesn't normally do. He left Indian shores without criticising Modi or his controversial policies like the Citizenship (Amendment) Act, or CAA, or scrapping Article 370. Also, the diplomatic symbolism consciously played out by Trump must not be lost sight of. He is the first American President to have visited India without visiting Pakistan. He came directly from Washington DC and went straight back to the American capital without any stopover in between. That is quite a record and an important diplomatic symbolism. 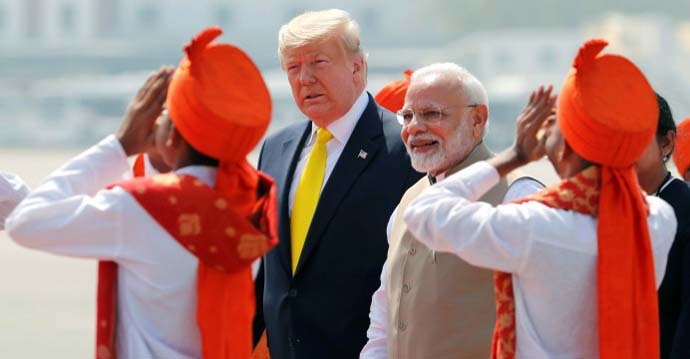 Trump chose to ride on his personal chemistry with Prime Minister Narendra Modi and did well in buttering both sides of his toast towards that objective. (Photo: Reuters)

In fact, Trump proved to be a strategic asset for PM Modi. He didn't go ballistic on burning issues like the CAA protests and the ugly riots in Delhi, the worst the national capital has witnessed since the November 1984 anti-Sikh riots.

He dismissed the Delhi riots as "a few attacks" and said at a press conference in the US embassy in Delhi that he didn't discuss these issues with Modi. Moreover, he described the Delhi violence as India's internal matter. Trump's words, nay his every alphabet, were music to Modi's ears. But a crucial question arises: Who benefits more - Trump or Modi? The US or India? It was an out-and-out Trump trophy ahead of his re-election campaign. India was just a facilitator. Trump obliged Modi by keeping mum on controversial issues like CAA or the Delhi riots, though his rival Democrats promptly pounced upon the issue and presidential-hopeful Bernie Sanders severely criticised Trump for keeping quiet on Article 370 and CAA.

Besides, his views on radical Islam enthused New Delhi no end when he said that the US and India were united in fighting this menace. While claiming that the Islamic State in Iraq and Syria (ISIS) had been "100 per cent destroyed" because of his administration's tough stand, Trump also said that his administration had been working with Pakistan to crack down on terror groups operating on the Pakistan border. "We are beginning to see signs of big progress," he said.

Though Trump eulogised Modi throughout his brief Indian visit and took care not to criticise the government on any issue, he sent subtle messages to the Opposition as he spoke of India transforming itself into an economic power house in the past decades. Not just that, he also praised India for taking 216 million people out of poverty in the past decades, thus not restricting his certificate just to the Modi era!

An important feature of Trump's India visit is that even during this trip which was entirely political from his perspective and geared to his re-election bid six months later, he didn't lose focus on the biggest American strategic imperative: Countering and containing China.

Trump played his China card very subtly and dexterously. Let's elaborate on this important point. For example, while complimenting India for becoming an economic powerhouse in the past seven decades, he mentioned that India's rise has been peaceful and not through "coercion" like the case with another power. Read China for "another power" in this context.

He talked about the Strategic Quadrilateral and dwelt upon the need for India to come forward and do its bit.

For the uninitiated in international diplomacy, the Quadrilateral, or simply the Quad, is a four-nation strategic architecture comprising the US, Japan, Australia and India, largely to counter China. Moreover, Trump talked about the Blue Dot Network (BDN), a strategic issue duly reflected in the joint statement released at the end of Trump's India visit. Herein, he urged India to pro-actively participate in the BDN, which is supposed to be a rival to China's ambitious Belt and Road Initiative (or BRI).

Though unlike BRI, the BDN is only a certification authority for infrastructure projects and doesn't extend loans or finance infrastructure or any other projects. Unlike the BRI, which has at least 73 countries as its partners, the BDN currently comprises just three countries - the US, Japan and Australia. The US wants India as the fourth member state. India has formally stated its position of not joining the BRI, but hasn't opened its cards yet about the BDN. In all probability, India would join the BDN architecture in due course.

Trump must be complimented for projecting and propagating the well-known strategic imperative of countering China. At the same time, he carefully did so without referring to China by name. Who won and who lost in the strategic game of one-upmanship, as Trump came calling to India? India can rightfully claim the tag of being a winner in the diplomatic sense for the reasons cited above. It must go to India's credit that despite his previous track record, Trump didn't embarrass the hosts. On the contrary, he went on eulogising Modi and India! This in itself is a big achievement from the Indian perspective.