May 22, 2018, was the 100th day of the protest against Sterlite in Tuticorin. Men, women and children took to the streets and marched towards the Secretariat to show their solidarity and demand their right to live in a safe environment. Little did 13 people in this group know that they were to breathe their last and were to never return home. 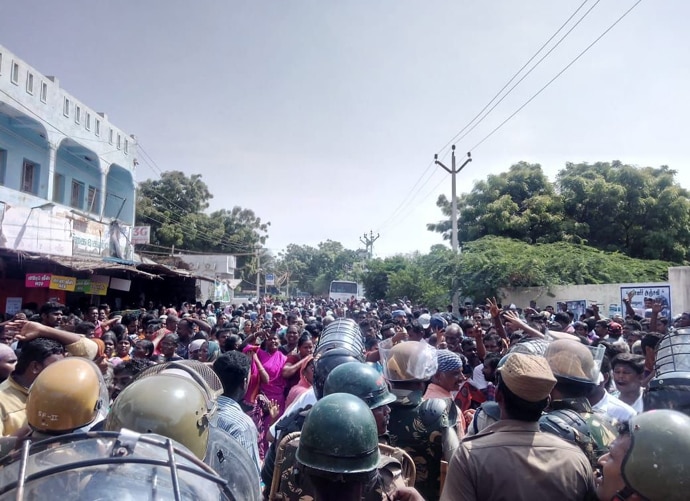 The day started with protests. It ended with tragedy. (Photo: ANI)

The 17-year-old Snowlin, with a dream to become a lawyer, had talked to her mother and sister-in-law into letting her go for the protest. “If not for them, who was to speak for their right?” This was the question she asked her mother to make them participate. Snowlin was shot in her head. Her parents have still not got access to her autopsy report.

But the recent autopsy report accessed by Reuters brings to light that 12 out of 13 protesters killed during the firing against anti-Sterlite protesters in Thoothukudi were apparently hit by bullets in the head or chest – and half of them were shot from behind. A chilling picture: Police firing in Tuticorin. (Photo: ANI)Though police rules in India do allow officials to use live ammunition to counter civil unrests, there is also a clear rule that they should not shoot to kill. It has been clearly stated that officials should shoot below the waist and only at the most threatening part of the crowd.

But was this followed in the Tuticorin firing? Was a 17-year-old girl a threat? Snowlin’s family recall a peaceful protest turning violent – they insist that the police opened fire first. But CCTV visuals from the Collector do show men attacking the police as well as the government building and setting government vehicles on fire. Investigations by the CBI are still underway.

But the news was shocking for the families of the 13 victims and hundreds of others who had suffered due to the protest. Recently, on December 15, the NGT had dismissed the Tamil Nadu government's decision to close the Sterlite copper plant in Tuticorin.

The NGT court in its order directed Vedanta to deposit Rs 2.50 crore as a token amount for their alleged failures and asked the company to spend Rs 100 crores within a period of three years for the welfare of the inhabitants in the area. “I have lost my leg, I am not able to walk properly. A compensation of five lakh was given. I will add another lakh and return 6 lakh - will the government be able to return my leg?” asked Princeton, a survivor of the May 22 attack.

Henry Dephane, an activist closely working with the Sterlite case, revealed with bewilderment how the Madurai bench’s order to provide the post-mortem report of the 13 people killed has apparently still not been implemented by the state government.

“It has been seven months since the incident took place and seven months that the government of Tamil Nadu has just not been able to provide certificates of the post-mortem to the families. This is atrocious. The right to life means the right of my family members to know how I have been killed and what went wrong,” stated Henry.

Politicians have added their voice. “The Sterlite shooting in Thuthukudi is a planned murder of the people by the Edappadi government. The autopsy report shows that the people were shot on the head and chest and from behind. A government that has killed the common man for a corporate will be taught a lesson by the public,” wrote DMK MP Kanimozhi on Twitter.

Her colleague DMK MP TKS Elangovan added, “This government did not take cognisance of the agitation going on over there for 100 days and suddenly opening fire at them is a barbaric act. Now people will understand how brutal and barbaric the state government is.”

While the AIADMK doesn’t take the criticism lightly, the party’s spokesperson Kovai Sathyan in a quick response said, “I am surprised DMK is making this statement. If you remember 1998's, peaceful protestors from Manjolai tea estate were killed and it was under the DMK when M Karunanidhi was the CM. My statement is not justifying the deaths in Tuticorin. I am saying there is a CBI inquiry underway trying to unravel the root cause of the issue. The DMK’s hands are tainted.” What went wrong in Tuticorin could get lost in their blame game. (Photo: DailyO)

An international non-profit organisation, Global Witness, in its study states that India has seen a significant increase in killings and repressions during protests and civic activism. In more than half the cases, the perpetrators are the people whom we consider to be our protectors in the legal system – the police. In the world, India was counted as the fourth most deadly state for registering the killing of land and environment defenders in 2016.

In Tamil Nadu itself, multiple battles have been fought – Kudankulam, Kodaikanal Hindustan Uniliver, Neduvasal Hydrocarbon and many many more. In each of these, the common citizen has been the victim. Perhaps it is time to think whether this development really involves the loss of such lives.