How exactly does this behaviour create a level playing field for independent voices without the coveted blue tick?

Social media is a great equaliser. Now ordinary folks can interact directly with well-known personalities, including journalists, commentators and writers. This is especially empowering for those who don't come from privileged backgrounds and therefore automatically have access to, if not being a part of, the mainstream media and intellectual establishment.

A recent laudable initiative to make social media a safer and more engaging place for women is Twitter's #PositionOfStrength campaign launched in India on February 26, 2016. Twitter itself explains the goal as follows as intended to "bridge the gender equality gap online" and allow women to "communicate safely with confidence".

According to statistics quoted by Twitter itself, only 29 per cent of 375 million users of the internet are women and, only a fraction of these are on social media platforms. As it happens, March 8 is International Women's Day so Twitter's campaign was well timed.

Among others, Twitter's head of news, politics and government in India and former journalist Raheel Khursheed tweeted from the launch event including tweets such as:

So it was disappointing then that Mr Khursheed appeared to depart from the principles of Twitter's #PositionOfStrength campaign when he sent out a couple of tweets which appeared to poke fun at Jhanvi Behal, a 15-year-old young woman who's in the news for challenging the views of a Jawaharlal Nehru University (JNU) student activist Kanhiya Kumar on the allegations of seditious behaviour by JNU students. Ms Behal was reported in the news to be challenging Mr Kumar to a public debate on the topic.

These tweets reproduced below include a "dancing Shakira baby" from YouTube and an approving retweet of a tweet, subsequently deleted, which featured a young boy with two puppies. The author of the tweet, Siddharth Singh, later clarified that photograph of the minor was used with permission from the boy's parents. There's no way to ascertain however if Mr Khursheed was aware of this at that time he retweeted that image as he's offered no clarification. 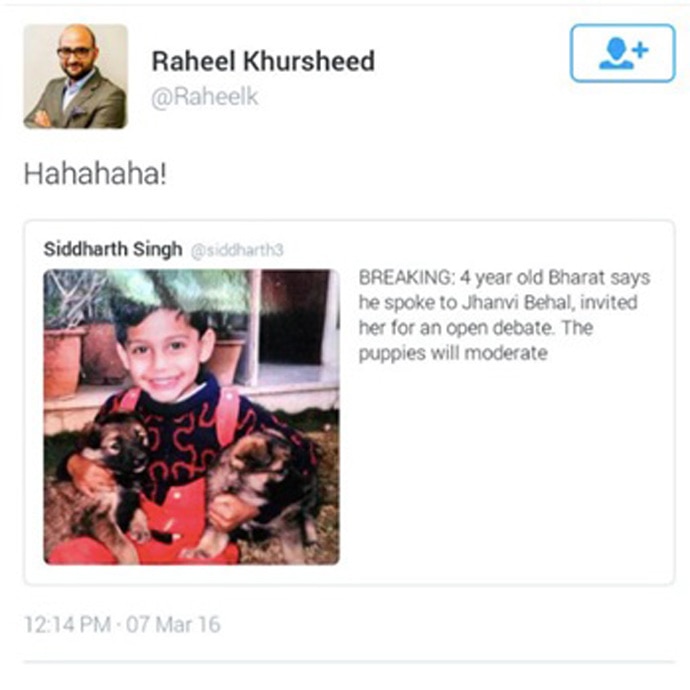 As for Ms Behal, she's a remarkable young woman who has previously taken up causes including the underage sales of alcohol and tobacco and made a documentary to spread awareness against sex-selective abortion which is rampant in her home state in Punjab as it is elsewhere in India. Unfortunately, rather than encouraging Ms Behal, Mr Khursheed appeared to mock her instead, sending out the following tweet which he subsequently deleted. 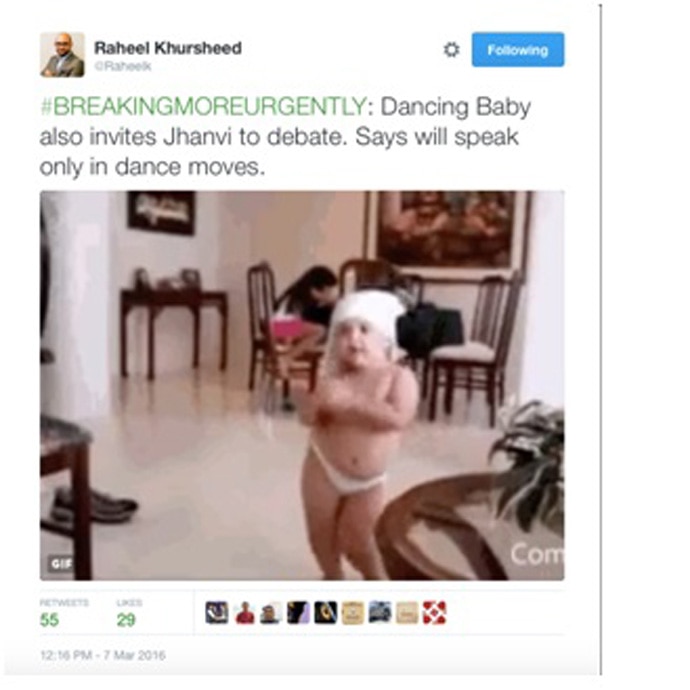 Considering his official senior role in Twitter India and having been part of #PositionOfStrength, the glaring irony and indeed cognitive dissonance implied by these tweets is hard to deny. After being challenged on it, Mr Khursheed as noted above, deleted his tweet, but without explanation or apology. At the time of writing, no such explanation or apology has been issued either by Mr Khursheed or by Twitter.

The closest Mr Khursheed has come to an explanation or apology so far as I'm aware is in reply to a question posed to him on Twitter where he said the following:

Mr Khursheed's defenders make the case he was not mocking Ms Behal but mocking the alleged absurdity of making her a national icon. Indeed he retweeted a tweet directed toward me making this very point.

The tweet and Mr Khursheed's retweet of it seem odd, given that presumably the very purpose of a programme like #PositionOfStrength is to encourage bright young women like Ms Behal to engage in the public sphere rather than discourage from doing so. Whether she ends up becoming a national icon or not is surely irrelevant.

While Mr Khursheed says he did not encourage trolling of Ms Behal, that is indeed what appears to have happened. Mr Khursheed on Twitter is not just another user but a high ranking official of Twitter India, so what he tweets or retweets surely carries weight.

The point is #PositionOfStrength's goal among other things is to combat cyber bullying but it's hard to see based on a cursory glance of Mr Khursheed's Twitter timeline, how exactly it serves this goal. How exactly does that combat cyber bullying or discourage trolling or create a level playing field on Twitter for independent voices who don't have the coveted blue tick Mr Khursheed and other well-known figures possess?

Again, had Mr Khursheed been just an ordinary Twitter user without an official connection to the organisation, it's possible it would have gone unnoticed.

Ms Behal is not on Twitter to make her case. Surely Mr Khursheed ought to explain what he meant and or could also consider apologising for any offence his original tweet may inadvertently have caused. That he hasn't yet done so is doubly disappointing.

I personally am prepared to extend to Mr Khursheed the benefit of the doubt and do not believe that his intention was either to mock an earnest 15-year-old young woman nor mock the aspirations of young women to make a difference to society.

I also believe that in the heat of real time 24/7 commentary in 140 characters, well-meaning people do sometimes make statements that are misconstrued or misunderstood. So far, there's nothing along the lines of an explanatory statement from Mr Khursheed nor from Twitter or Twitter India. In fact, what we heard from Mr Khursheed in the immediate aftermath are snarky retweets which appear to make light of the incident. Subsequently, as previously noted he replied to a query today suggesting that his deleted tweet was misconstrued. I do hope that apart from replying to a query, he independently clarifies that this benign interpretation indeed is a correct reading. The Twitter campaign #PositionOfStrength with which he's involved deserves no less. A failure to do so would put a question mark over how serious Twitter and Twitter India itself are at least in the Indian context in engaging women more fully in dialogue and debate over vital issues of the day.

#Jhanvi Behal, #Social Media, #Trolling, #Twitter
The views and opinions expressed in this article are those of the authors and do not necessarily reflect the official policy or position of DailyO.in or the India Today Group. The writers are solely responsible for any claims arising out of the contents of this article.

The author is an independent commentator based in Mumbai and an active Twitter user herself.