Two years of Modi government are riddled with contradictions

The idea of BJP acting as a ruling party when in power, and as a movement when in opposition seems to be a thing of the past already.

Taking stock of what has happened when it comes to political and economic developments in India in the last two years can be deeply misleading and deceptive at the same time. Looking at the hullabaloo surrounding the recent victory of the BJP in Assam makes one feel that the party is well on course of achieving bigger feats.

What the pompous celebration of the victory doesn't quite show is the drawing of a veil on the banal governance model for the last two years. Given the fact that the party was making a desperate attempt to reap political dividends in states which haven't been its conventional strongholds, it almost gives a feel of being in a perpetual campaigning mode.

The idea of BJP acting as a ruling party when in power, and as a movement trying to mobilise people when in opposition seems to be a thing of the past already. After two long years, the image it is still trying to maintain is of how they won an unprecedented election, almost rendering the Congress into a political non-entity. 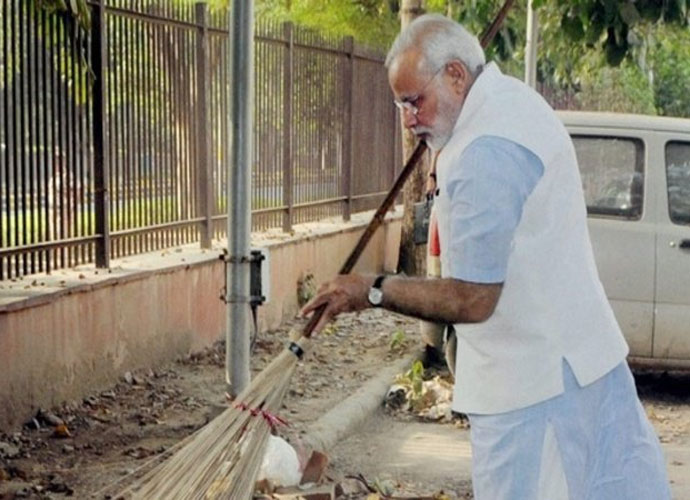 Swachh Bharat Abhiyan gets muddied when one looks at it in the larger framework of Make in India.

By doing this, it has conveniently managed to keep basking in that momentary glory which occurred a couple of years ago. In the last two years, the BJP, far from being stable and visionary in its outlook, has been mired in deep contradictions.

There are myriad contradictions and it is hard to pinpoint one, especially regarding the new flagship schemes dealing with socio-economic issues. Swachh Bharat Abhiyan, for instance, came with a lot of objectives with its ostensible purpose being to work towards reducing open defecation by building toilets.

In doing this, it failed to concomitantly provide any blueprint on the health advantages it would accrue and spreading general awareness regarding the same. The gap between the two is alarming as there are umpteen cases where people have refused to make use of toilet facilities only to answer nature's call which supposedly gives them more relief.

This gets more muddied when one looks at it in the larger framework of "Make in India", as the former which talks about cleanliness and reduction of waste, is seemingly in opposition with the amount of waste the latter scheme is going to produce.

Another set of contradiction is related to the insistence on attracting as much Foriegn Direct Investment (FDI) as possible. Even if one is ready to believe the positive role it will play in spurring growth, the one thing that it most certainly is not going to do is create jobs.

With a gargantuan demand of at least one million jobs each month seen in the context of virtually no progress in the manufacturing sector, and exports at a 17-month low should act as a cause for concern. The overall conditions of the informal economy continues to be  precarious wherein the pangs of liberalisation along with the "mafianisation" of the economy in the "shadow state" of the locale shows anything but stability and progress. (Harris-White)

How these two contradictory goals are going to be achieved is anybody's guess.

Other schemes, like the Jan Dhan Yojana, started with an audacious move of opening up bank accounts for each and every person to sink it with the Direct Benefits Transfer, among other things. At the same time, it was World Bank which reminded India in 2015 itself that almost half of these banks were non-functional. Even today, according to the latest surveys, around 27 per cent of these banks remain unused, and a lot more remain in a state of dormancy.

Moving on to the Deen Dayal Upadhyaya - Grameen Kaushalya Yojana, it emphasises the idea of using modern-day cutting edge technology to expedite our everyday laborious work. What it fails to take into account is the woeful condition of rural infrastructure, for instance, along with the paucity of learning material and other resources which can only then make judicious use of the benefits of technology.

The eventual output of a knowledge dissonance mirrors the non-inclusivity of the overall economic trajectory for the past two years. To boast about 7.6 per cent and 7.2 per cent growth in its first two years fails to provide any reason for the miniscule rise in per capita growth, and the widening gap between super-rich and the marginalised.

One of the ways to sustain this growth seems to be the easing of bureaucratic logjam, especially for companies vying for resources located in tribal lands. That the job of an environment minister is to maintain strict regulations over corporate activities and not to be euphoric about providing speedy clearances is a principle that hardly carries any merit.

This consistent speed at one end dramatically turns into a ponderous, laid-back style of functioning when it comes to clearing critical bills on the floor of the House.

The government, not being able to pass important bills like that Goods and Services Tax (GST), Land Acquisition Bill, among others, has found a workable excuse in the name of an intransigent Rajya Sabha which refuses to function in an amicable manner.

The upper House predicament will remain the same till 2019, irrespective of  what happens in certain critical state elections in 2017.

Instead of this fruitless game of passing the buck, the government needs to be more clear, open-minded and innovative in handling some of these irreconcilable political manoeuvrings.

Otherwise the ambitious projection of its lofty goals driven by a singular, firm belief, in the prospects of economic growth will keep meeting such neglected contradictions.

#Swachh Bharat Abhiyan, #BJP, #Two years of Modi
The views and opinions expressed in this article are those of the authors and do not necessarily reflect the official policy or position of DailyO.in or the India Today Group. The writers are solely responsible for any claims arising out of the contents of this article.