From Covid-19 pandemic in the state to the Palghar lynching, CM Uddhav Thackeray's handling of critical issues reeks of his inexperience in state administration.

Before 2019 Maharashtra state assembly elections, the Thackeray family used to take pride in the fact that they had never contested an election and neither served on an elected post. Shiv Sena founder Bal Thackeray used to take pride in being the ‘remote control’. Such an attitude might work well in creating a mystique among the party followers about the supreme leader and creating a hierarchical model of leadership in which the unelected party boss was always above the elected legislators, ministers or even the Chief Minister. This caused the Shiv Sena’s Thackeray family to never have any administrative experience, a fact that Sharad Pawar exploited to govern Maharashtra by proxy from 1999 to 2014.

Uddhav Thackeray became Maharashtra Chief Minister without even being an MLA. He had no administrative experience, his version of leadership was the annual mass gathering at Shivaji park known as the Dussehra Rally. The ruling BMC and corruption in it was the second thing the Thackeray family was adept at. His novice son Aditya Thackeray contested to be an MLA for the first time in 2019. This fact itself became news and he was instantly catapulted into Cabinet Ministership, proving that for the Shiv Sena, which was a long-time critic of the Gandhi family on the dynastic rule, dynasty alone mattered: hypocrisy at its height. Uddhav Thackeray became Maharashtra CM without even being an MLA and has no administrative experience. (Photo: PTI)

CM Uddhav’s image took a beating when the Covid-19 pandemic came along, and now finally the people of Maharashtra are realising Uddhav Thackeray's administrative inexperience, and the fact that he has never dealt with a crisis at a governmental level before. That he is still learning the tough task of governance is causing immense harm to the state’s fight against Covid-19 and hurting Maharashtra economically, on the law and order front, and most importantly, is resulting in a lackadaisical approach to saving precious lives.

In a crisis situation like the pandemic, when the entire nation is in lockdown, and Mumbai in particular and Maharashtra as a state has the maximum number of cases (6,817 as of April 24), Uddhav Thackeray has failed in his duty of providing good governance in one key decision after the other. Incidents like the Palghar mob lynching, which killed three including two Hindu sadhus, the mess created by the mass gathering of migrants in Bandra who were unhappy with the state government for not providing them with an adequate supply of food and safe shelter and hence wanted to return to their native places, the Wadhawan brothers incident in which a state top IPS official in the Maharashtra Home Ministry allowed them to travel despite lockdown, and stopping of tests of asymptomatic patients, a decision which is against ICMR guidelines during a health emergency with mass fatalities, make it clear that CM Uddhav Thackeray is inefficient in administering the state, and the people of Maharashtra are suffering as a consequence. 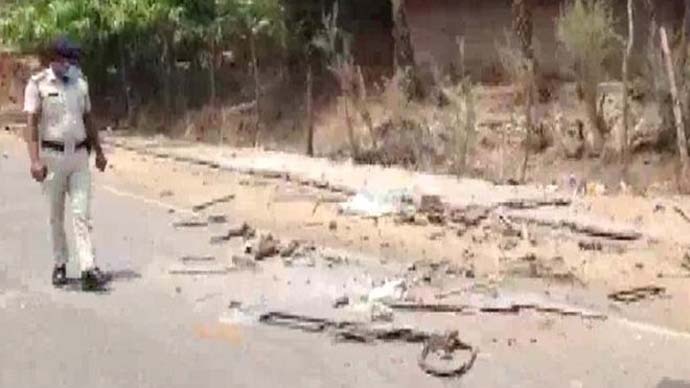 Why has law and order deteriorated in Maharashtra to an extent that a group of people was able to kill three unarmed men in Palghar? (Photo: ANI)

The gruesome lynching of two sadhus and their driver in Palghar by a group of tribal people has become a highly emotive issue with Home Minister Amit Shah. It did not help matters that the incident happened in the presence of policemen who fled the scene. Speaking to Uddhav Thackeray, Home Ministry and NHRC, Amit Shah has asked for a report within a month on the incident. The two policemen have been suspended. Maharashtra Home Minister Anil Deshmukh tried to divert the issue by saying Muslims were not involved — a statement that does not solve the problem. The key issue here is how did the lynching take place in the presence of the police? Why has law and order deteriorated to an extent that a group of people was able to kill three unarmed peaceful citizens travelling for an emergency purpose? Why was adequate policing and intelligence information of a large gathering not done? In videos, it is evident that hundreds of people had gathered, that too during the lockdown, to murder the sadhus. Clearly, Uddhav Thackeray has shown that his grip over law and order is very weak and that ordinary citizens are not safe.

Another failure of the Uddhav government is their appalling decision to not test all the asymptomatic cases of Covid-19 in Mumbai. This, even after Mumbai is the worst affected city in the country, with almost 3,000 cases. The Shiv Sena-controlled Brihanmumbai Municipal Corporation decided to go against ICMR guidelines to selectively test asymptomatic high-risk people, even though the guidelines clearly state that all the asymptomatic high-risk contacts are to be tested. That this wrong move by the state government and BMC could prove fatal to citizens is evident from the fact that 79 per cent of all Covid-19 patients admitted in hospitals have shown no symptoms. CM Uddhav Thackeray must start the testing of all asymptomatic patients, as social distancing is simply not to contain the virus in crowded slums like Dharavi where the total number of positive cases is now 220.

Uddhav Thackeray is in a strange situation where he has to find a way to remain CM by securing a seat in the state legislature within a month, whereas his main task should be to protect the citizens from Covid-19 and ensuring economic recovery of India’s financial capital. It is an irony that a leader who boasted he does not believe in contesting elections, is doing last-minute efforts to become an MLA or MLC before the six month period expires. Meanwhile, Maharashtra is suffering because of his lack of administrative experience. I say this being a Maharashtrian myself. May God save Maharashtrians during Covid-19 while the state CM tries to get elected.