As the chorus against inadequate insurance compensation grows in almost all states, Thackeray has found an opportunity to boost the morale of his party just in time for the Assembly elections.

When Uddhav Thackeray raked up the issue of inadequate compensation to thousands of farmers under the Union government’s crop insurance scheme, Pradhan Mantri Fasal Bima Yojana, in June, a few leaders in the Shiv Sena accurately judged their chief’s intentions. Thackeray led a farmers’ march in Mumbai on July 18 issuing a stern warning to insurance companies against non-payment of compensation to the farmers.

As the chorus against inadequate insurance compensation grows in almost all states, Thackeray has found an opportunity to boost the morale of his party. “I am giving you 15 days’ time,” Thackeray warned the insurance companies at the march at the backyard of his residence in Bandra. “If you fail to release the money we will start kicking you from the 16th day.” The crop insurance scheme is being widely discussed since Maharashtra Chief Minister Devendra Fadnavis claimed that his government has made insurance companies pay Rs 15,000 crore in last five years when the farmers had paid a premium worth Rs 2,300 crore. In this scheme, the farmers are expected to pay 2 per cent of the premium while the Union and state governments pay 48 per cent each. The farmers are compensated by the insurers if local agriculture officers term them eligible for compensation after inspecting crop damage.

Kishor Tiwari, chairman of state-run co-operation Vasantrao Naik Sheti Swavlamban Mission (VNSSM), says that payment of crop insurance is necessary as banks refuse to disburse fresh crop loans. He said the state government has allotted Rs 25,000 crore for crop loans. But the public sector and co-operative banks have so far distributed only 25 per cent and 40 per cent of this amount, respectively.

Agricultural activist Vijay Jawandhiya says there is a fault in the system as crop damage is analysed at taluka level where samples are taken from five to six villages out of 100. This does not give an accurate picture of the damage. “The analysis should be done at either individual village level or at the Gram Panchayat level if the villages are small in size,” he says. He adds that the insurance amount should be different for irrigated and non-irrigated farmlands. He, however, blames the politicians for the policy mess. 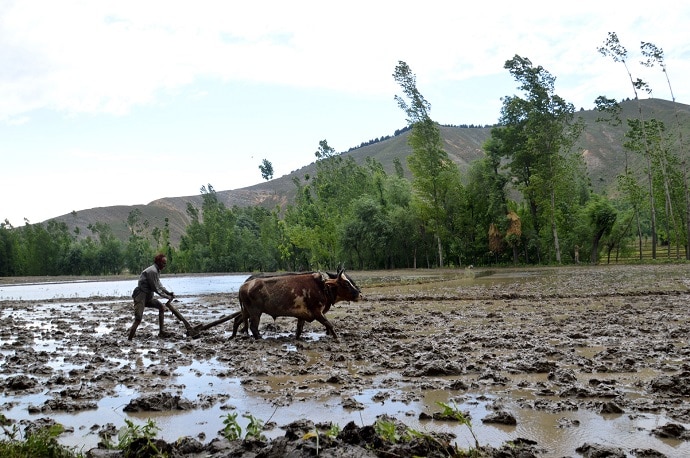 Thackeray should take agriculture officers to the task to really benefit the farmers. (Photo: IANS)

Thackeray proved Jawandhiya correct. He has launched an agitation over crop insurance with the Assembly election due in three months. “We are firmly standing with the farmers who are feeding the state against all odds. That is our commitment,” Thackeray told the audience.