What a hung verdict in UK Elections means

One could almost hear the cries ringing out this morning as Britain's left-wing Labour Party pulled off one of the biggest political escape acts in history.

When Prime Minister Theresa May called the General Election two months ago, her Conservative Party was polling 24 points ahead, predicted by some to win a parliamentary majority of up to 200 seats. For two years prior, Labour leader, Jeremy Corbyn, had been widely vilified for his perceived incompetence, regarded by none but his supporters as a credible candidate for Downing Street.

Today, it is Theresa May who lacks all credibility as she cobbles together a coalition that might go forward with Brexit negotiations this autumn, having miserably failed to achieve the overwhelming mandate she explicitly asked the public to give her, losing her slim majority after running one of the most woeful election campaigns of all time – certainly by an incumbent.

Forced to backtrack on pledges made in her very ill-considered manifesto, she was also exposed as weak, anxious and evasive when scrutinised in interviews. Having campaigned on being the “strong and stable” candidate, she proved herself to be the opposite.

Corbyn, by contrast, was reasonable and straightforward, subsuming his own radically leftist instincts within the broader consensus of his party to produce a surprisingly sensible and achievable manifesto based on modest proposals to increase public spending with gentle rises in taxes on corporations and the wealthy. 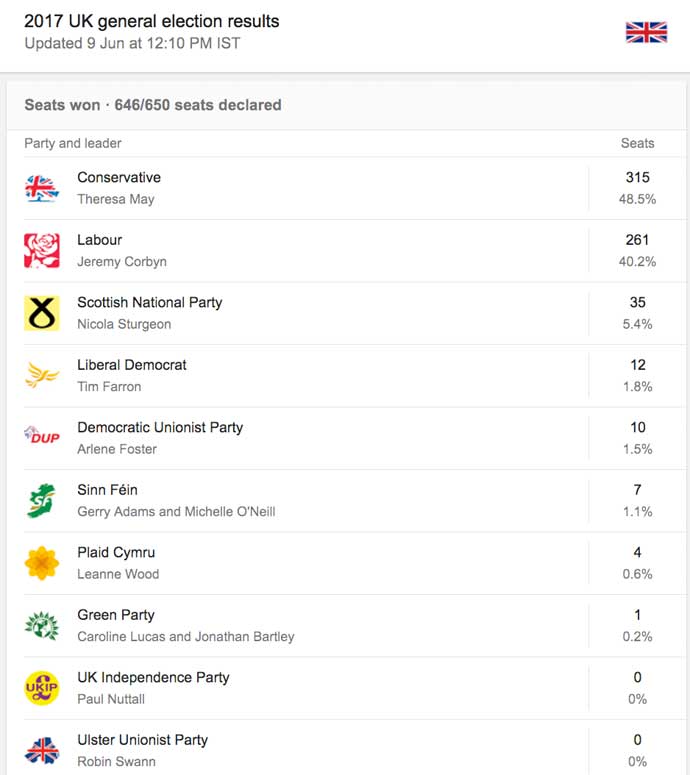 Today, his supporters celebrate him as a messiah who has saved his party and transformed the British political landscape – bizarrely overlooking the fact that he actually lost by a considerable margin. In fact, the result is a spectacular failure on Labour’s part too.

Easily the biggest political party in the UK, with a 5,00,000-person membership that is over three times larger than the Conservative party’s, that is not only younger, more energetic and social-media savvy, but also far more deeply embedded in the grassroots of the country, Labour is never the underdog it loves to portray itself as. It should never be celebrating losing an election as it does today, but ruing a historic missed opportunity: an opponent as weak as Theresa May probably will not come again.

Corbyn is not Britain's saviour. He is merely another symptom of the terminal malaise of the British who have yet to come to terms with a world in which they are of marginal relevance and increasingly bystanders to their own destiny.

Like Theresa May, he is unenthusiastically committed to honouring the result of the Brexit referendum, lacking both the sense and courage to tell the public what an impossibility it is. That he campaigned on a platform for social justice while saying nothing to address the economic hardship, especially for the poorest, that Brexit would entail is proof that he is as incapable of coping with his country’s predicament as Theresa May, and the electorate was wise to hand neither of them a mandate.

The past year has exposed the utopian vision of the Brexiteers to be nothing but a dim-witted hallucination. No major economy – not India, China, nor the US – has expressed a shred of excitement about dealing with a UK that is outside of the EU. And the costs of exit, which is still two years away, are already being felt as inflation rises and investment falls. Britain now has the slowest growth of any EU member.

The past few months in Britain, full of jihadi atrocities and an election campaign that showed the governing party to be wholly inept, but which the Opposition still couldn't win, have been a sad indictment of the country.