Understanding Independence: Celebrating the Indian spirit of inquiry and the freedom to do so

One would have thought patriotism is like motherhood. Not much to debate about. Apparently, that's not true. It is in fact a many-splendoured thing. Much like a rainbow but with many shades of grey. I discovered this after reading the brilliant essays in this issue written by an eclectic group of 11 intellectuals.

We invited them on the occasion of Independence Day to consider the many meanings and consequences of patriotism, for India today and indeed for India of the past. By illuminating the many aspects and complexities of Indian patriotism, we hope to hold a mirror up to the country at what feels like an inflexion point in its history.

It is particularly relevant in today's environment when people are routinely being accused of being anti-national, and nationalism is being confused with patriotism.

Also because we live in interesting times. Across the world, we are witnessing the resurgence of strong nationalist leaders who profess love for their country. Patriotism, we find, is now increasingly veering towards nationalism, an ideology premised on an individual's loyalty and devotion being above the interests and opinions of others.

Patriotism has found a new meaning in India. We saw a national election which foregrounded nationalism and the rise of a party. Love for one's country is a concept that can be deployed in many ways to unite or divide, to celebrate or destroy. When does patriotism turn into nationalism and when does nationalism become jingoism? 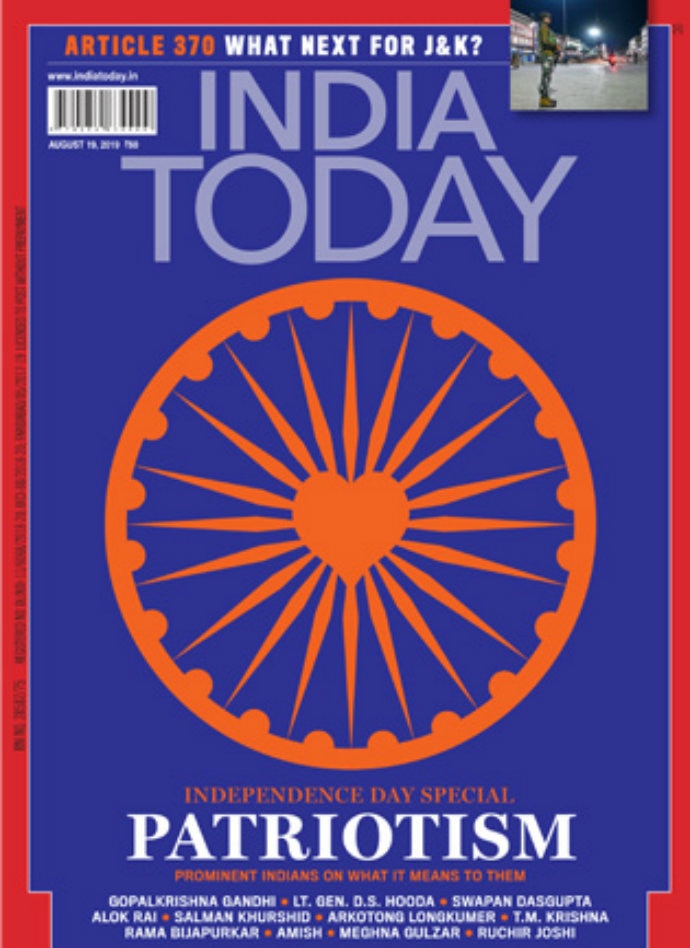 India Today cover story, Independence Day Special: Patriotism, Prominent Indians on what it means to them, for August 15, 2019.

Our Independence Day special, curated by Managing Editor Kai Friese, offers a salon of stellar writers. In the spirit of a salon, we have divergent views on the changing nature of patriotism. It has been looked at from the perspective of politics, films, cricket, the military, of marketing and of history.

Salman Khurshid, lawyer and politician, says nationalism is devotion to your own even sometimes to the detriment of another while patriotism is striving to uphold the honour and respect of one's country even in the face of pain and deprivation. For filmmaker Meghna Gulzar, on the other hand, patriotism is a personal emotion, like religion.

Former bureaucrat Gopalkrishna Gandhi elaborates on why love for the country has a flip side — hate — and why two emotions in one heart are an unnatural and unhealthy state for a Republic to be in. Expounding on the nationalist challenge mounted by the BJP and the invocation of Bharat Mata, journalist-MP Swapan Dasgupta examines the equation of national unity with Hindu cultural nationalism.

Marketing professional Rama Bijapurkar explores how consumer brands continue to celebrate and recognise India's unity in diversity. Author Ruchir Joshi traces the transformation of an Indian obsession — cricket — and wonders if the game now played by an aggressive, world-beating side comes with political overtones.

Academic Alok Rai fears the nationalism of New India' must inevitably entail violence. Former Northern Army Commander Lt General DS Hooda argues that while patriotism is always present at the back of a soldier's mind, it is not considered a major factor with which you can motivate men going into battle.

He quotes writer George Orwell on patriotism: By patriotism, I mean devotion to a particular place and particular way of life which I believe to be the best but have no wish to force on other people.

Sociologist Arkotong Longkumer highlights the clash between the ethnic homeland politics of India's Northeast and the overarching ideology of Hindutva that professes a unitary territorial reality at its core. Carnatic vocalist TM Krishna explains why patriotism in its essence is not obedience or faithfulness but the celebration of questioning and free will.

The nuances of patriotism and nationalism that played out this week are a subtext in realpolitik.

The NDA government made a historic decision in dismantling Articles 370 and 35A, and reducing the state to two Union territories Jammu & Kashmir and Ladakh. This is a seismic shift in the political landscape of the country. Kashmir has been a festering sore in Indian politics for the past 72 years.

Just about everything has been tried from insaaniyat to military force but nothing has changed. The constitutional legalities of this audacious act will continue to be debated, but it has shifted the whole paradigm in this troubled state as well as in our relationship with our neighbour.

The move is based on the premise that it will bring rapid economic development to the state. J&K will now be better integrated economically with the rest of India as previous restrictions will be lifted. I believe there is no better integrator than markets. They will bring connectivity, employment and investment in social infrastructure; overall, better lives for the citizens of the state.

Had this been done 70 years ago, there would have been no Kashmir problem. However, if the promise of economic growth is not fulfilled now, we will not only be back to square one but worse. It also marks a return to the question: what is the government going to do for the rest of India's sagging economy?

Enjoy reading this special issue which celebrates the Indian spirit of inquiry and the freedom to do so.

I wish you all a Happy Independence Day.

Also read: When The Hand Shakes: Congress looks incredibly weak and unsure. The Article 370 moment has hit it the hardest

#Aroon purie, #India today magazine, #Independence Day
The views and opinions expressed in this article are those of the authors and do not necessarily reflect the official policy or position of DailyO.in or the India Today Group. The writers are solely responsible for any claims arising out of the contents of this article.