A Union Budget must be more than a roll-call of schemes, however innovative.

First up, the good news. Finance Minister Nirmala Sitharaman's maiden Union Budget, against the odds, shaved the fiscal deficit from 3.4% to 3.3% of GDP.

Sitharaman's Budget is an enigma, wrapped up in layers of opacity. The devil lies in the details and several gremlins are already visible. 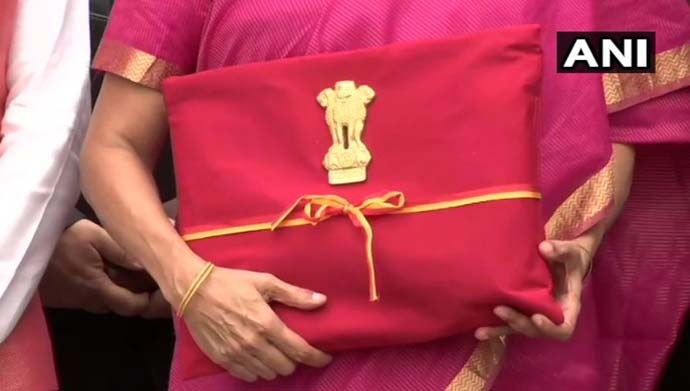 Yes, this Budget really is an enigma, wrapped in opacity. (Photo: ANI)

This is a pro-poor Budget with plenty of welfare schemes. Sitharaman spent the bulk of her Budget speech giving an account of schemes begun in Prime Minister Narendra Modi's first term. Most of these belong not to a Union Budget speech but to detailed announcements by the ministries concerned.

For example, the focus on waterways, roads and metros is encouraging — but these are ongoing projects. Similarly, rural electrification, clean cooking fuel and sanitation — all have new outcome timelines which again are moves in the right direction. Nothing new, really: Why did the FM make so many routine announcements during her Budget speech? (Photo: Lok Sabha TV)

But a Union Budget must be more than a roll-call of schemes, however innovative. For example, the promise to deliver piped water to every rural household by 2024 had been announced earlier. If successful, this mission could be a game-changer, impacting the health care especially of children across India.

Routine announcements, however, took up a disproportionate amount of the Budget speech: the fact that 135 kms of roads are being built per day is an outstanding achievement, but the transport ministry has shared this information publicly for months.

The Budget is long on intent, short on detail. For example, the government intends to invest Rs 100 lakh crore in infrastructure over the next five years. Where will the funds come from? We don't quite know.

The water resources and sanitation departments are being integrated. This is the sort of pragmatic, sensible exhibition of intent that has underpinned Modi's welfare programme. Similarly, new pension schemes for retail traders, the proposal to invest Rs 50 lakh crore in the Railways (including modernising railway stations) and building 1.95 crore houses for beneficiaries over the next five years are excellent micro-schemes.

Three ideas, however, stand out on a broader canvas.

First, connecting India in a single electric power grid — that takes the 'one nation' idea forward.

Second, the proposal to use surplus PSU land to build affordable housing. This will employ idle infrastructure to help the poor.

Third, allowing social enterprises and bona fide NGOs to raise equity in stock exchanges. That will create a new ecosystem of transparently funded entities in the social sector.

There were some discordant notes too.

India's obsession to secure validation from global rankings in the ease of doing business and educational institutions betrays a lack of self-confidence. To celebrate India's ascent in the ease of doing business rankings from 100 to 77 among 190 countries jars in a Budget speech. The inclusion of three Indian educational institutions (two IITs and one IIM) in the global 200 rankings is also hardly a cause to celebrate. India must aim much higher and be more circumspect in talking up small gains in global surveys where the methodology has an in-built bias against India in terms of citations, language and peer reviews.

The real core of a Union Budget speech should focus on revenue, expenditure and taxes — Sitharaman sped through these and left the good news on the fiscal deficit at the very end of her speech, almost as an afterthought.

The rich will probably not begrudge the 3% and 7% surcharge on their annual incomes between Rs 2 crore and Rs 5 crore and above Rs 5 crore respectively. But this is largely a political statement in line with Modi's recent pro-poor messaging since the extra tax revenue from the super-rich will be minimal. There aren't quite enough of this breed — and most park their funds in trusts and other opaque instruments.

The annual turnover threshold for taxing corporates at 25% has been raised from Rs 250 crore to Rs 400 crore. Sitharaman said this will cover 99.3% of companies — what she didn't say (taking a leaf out of former Finance Minister Arun Jaitley's book) is that the remaining 0.7% of companies with an annual turnover above Rs 400 crore anyway account for 90% of tax revenue. The government, therefore, stands to lose little corporate tax revenue while creating the optics of a lower corporation tax rate.

There are morsels though of good news. For startups, there will no longer be scrutiny of valuation of shares by angel investors. GST stands reduced from 12.5% to 5% for electric vehicles (EVs). There is an additional tax deduction of Rs 1.50 lakh on housing loans. 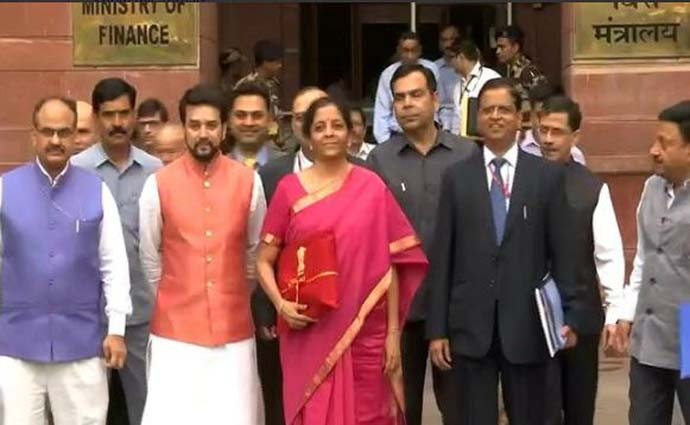 Team Acche Din: Do we need to wait for the next Budget then? (Photo: PTI)

Some other interesting ideas too dotted Sitharaman's Budget proposals: for instance, making an Aadhaar card a substitute for a PAN card and moving GST towards a single rate for almost all goods and services.

There are a few pinpricks too, like 2% TDS on cash withdrawals above Rs 1 crore from a bank account in one financial year and a new Rs 1 per litre cess on petrol and diesel.

Sitharaman is known to possess high levels of integrity and is a competent administrator. Her first Union Budget did not allow her to display those qualities in full. There was no word, for example, on stemming the precipitous fall in private investment from 38% of GDP in 2008 to 28% of GDP in 2018 or reversing the decline in the gross savings rate from 32.2% in 2014-15 — the NDA government's first year in office — to 30.5% in 2017-18.

Other macro-economic numbers on, for instance, inflation are good — but Sitharaman's Budget speech, though one of the longest in recent years, remained unusually silent on them. In a Budget aimed at an electorate made up largely of farmers, small traders and the rural poor, privatisation of PSUs took a backseat. The disinvestment target was raised from Rs 83,000 crore last year to Rs 1,05,000 crore in 2019-20.

Much more ambition on privatisation needed to be shown.

The proof of Sitharaman's Budget, strong on intent as it was, will now lie in the outcomes it delivers over this fiscal year and beyond.

Post your comment
#Tax, #Startup, #Nirmala Sitharaman, #Union budget 2019
The views and opinions expressed in this article are those of the authors and do not necessarily reflect the official policy or position of DailyO.in or the India Today Group. The writers are solely responsible for any claims arising out of the contents of this article.