The NCP chief has made it clear that the grand old party must get ready to give more space and prominence to allies than it did in 2004.

In politics, as they say, nothing happens by accident. If it does, then you must know it has been planned that way.

NCP chief Sharad Pawar recently indicated that a national level pre-poll opposition alliance for the 2019 Lok Sabha elections was unlikely. “I do not see the possibility of a uniform national alliance since the political situation on the ground varies from state to state,” he said. So near yet so far: No uniform national alliance in sight for opposition in 2019 Lok Sabha elections. (Credit: PTI photo)

“We should accept the dominance of Chandrababu Naidu in Andhra Pradesh, Mamata Banerjee in West Bengal... After polls, the picture of who will lead the alliance will be clear from those who get maximum seats.”

In 2004, it took a lot of efforts for the Congress leadership to come to terms to the fact that the party was in no position to defeat the BJP-led NDA. Until then, the Congress was basking in its past glory. Even though the party's position was dwindling in the two important states of Uttar Pradesh and Bihar, most of its leadership firmly believed that the situation could be salvaged. A reason behind that confidence was the fact that the party had a considerable presence in other states, unlike at present.

But Sonia Gandhi, as the party president, and her senior leaders were realistic enough to assess the situation correctly — they knew the importance of strong pre-poll alliances across regions to win the elections. Even though the party knew that Mulayam Singh Yadav (SP), Mayawati (BSP) and Mamata Banerjee (TMC) would never agree to be part of one alliance, to the Congress' credit, it did manage to rope in Sharad Pawar (NCP) and Lalu Yadav (RJD) to the fold.

Even though the Congress and the NCP together were running governments in Maharashtra and Goa after fighting elections against each other, it was a major shift in Congress’s policy to get into a pre-poll alliance. By then even the NCP had dropped the 'foreign-origin' issue. 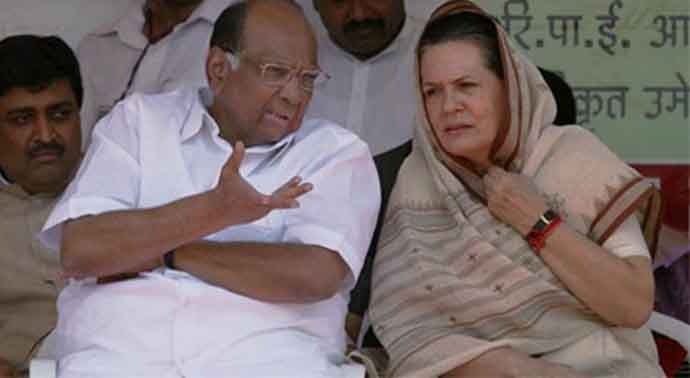 Things have changed a lot in 2018. Pawar has now spent 20 years out of the Congress. And it's clear that he will never go back to the party. Once earlier, he had spent nearly eight years out of the Congress, but chose to go back to the main fold in 1986, accepting Rajiv Gandhi’s leadership. But that was a time when the Congress was a formidable force. Now, the party doesn't enjoy the same status. Pawar is clear in his mind that the Congress is unlikely to regain its original position — not only in near future but perhaps never.

That could be one of the reasons why Pawar has made it clear that there cannot be any nation-wide mahagathabandhan (grand alliance), but alliances in states to challenge the BJP in 2019.

Pawar’s admission clearly shows his assessment of the Congress and its fast-diminishing reach.

In 2004, it was Pawar, who took the initiative in forging an alliance with the Congress for the Lok Sabha elections. While Pawar was one of the key players of the UPA, the alliance successfully challenged the Atal Bihari Vajapayee-led NDA.

Pawar was realistic in accepting that the Congress is the only 'true national’ party which could challenge the BJP at the time. He made it clear that smaller partners should let the Congress lead the alliance.

This time around, he has clearly hinted that the Congress will only be able to play a key role in states like Madhya Pradesh, Gujarat, Rajasthan, Chhattisgarh, Telangana, Andhra Pradesh, Karnataka and Maharashtra. But in the rest of the states, it can be part of state-wide alliances. Even in Maharashtra, he has emphasised several times that the NCP got more seats in the 2014 Lok Sabha elections than that of the Congress. Also, despite contesting separately, the Congress and the NCP won almost equal number of seats in the Assembly followed by Lok Sabha elections. This clearly indicates that even for an alliance in Maharashtra, the Congress will have to cough up more than it wants to reach a seat-sharing arrangement.

But there is another major difference between 2004 and 2018 — the Congress’s ability to bring in regional partners under one umbrella. The Congress is still going through a change in leadership at a crucial time. Old guards — like Pranab Mukherjee, known for his trouble shooting skills — are no longer active in cobbling up an alliance. Others who have the capacity — like Pawar, for example — are no longer in the party.

In 2004, the Congress still had a strong presence in the states, even if it wasn't doing too well, like Andhra Pradesh and Odisha, or even UP and Bihar. But now, the party has been wiped out of almost every corner due to a lack of strong leadership in the states.

Party president Rahul Gandhi’s efforts too aren't very encouraging and seems like he has a long way to go.

Pawar’s words clearly hints that the regional satraps are still unwilling to come under the Congress umbrella to take on Modi and the BJP. What's more, in all likelihood, the Congress might have to settle for far lesser seats than what it has been contesting so far.

The Congress will also not be able to call the shots in Maharashtra, where the NCP now claims to have become an "equal" partner.

While Rahul Gandhi is struggling to bring back his party's lost glory, Pawar has made it clear that the Congress must get ready to give more space and prominence to allies than it did in 2004.

Post your comment
#Rahul Gandhi, #Opposition unity, #Congress, #Sharad Pawar
The views and opinions expressed in this article are those of the authors and do not necessarily reflect the official policy or position of DailyO.in or the India Today Group. The writers are solely responsible for any claims arising out of the contents of this article.