Unnao rape victim on ventilator: Why are opposition parties in Uttar Pradesh comatose?

The incident should have drawn Mayawati, Akhilesh Yadav and Priyanka Gandhi to the streets outside CM Yogi Adityanath's office. None of that is happening. The implications are chilling.

The Unnao rape victim is battling for life in a Lucknow hospital, on ventilator with bleeding lungs and multiple fractures. Her blood pressure is reportedly fluctuating and she is unable to breathe without life support.

Doctors say the next 48 hours will be critical for her.

The other thing on life support in Uttar Pradesh is the combined opposition.

The agitational politics that the opposition is supposed to practice in order to keep the incumbent government on edge is missing — and this is as much a threat to democracy as the incumbent party not taking action against its legislators accused of crimes as heinous as rape and intimidation of the rape victim.

The politics of agitations is imperative to increase the responsiveness of governments that may turn a blind eye to public problems either due to complacency or plain laziness. 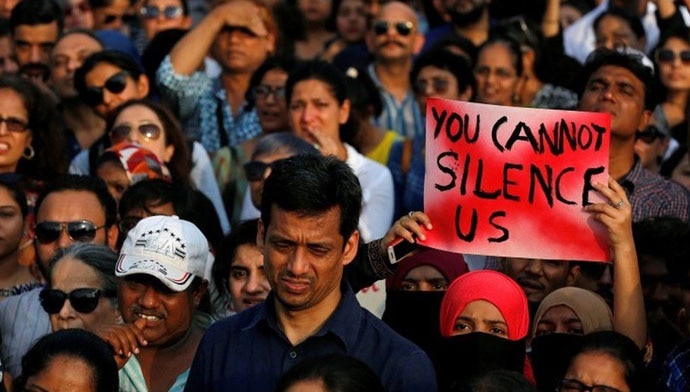 What is stopping opposition parties from taking to the streets? (Photo: Reuters)

Be it the Swadeshi movement of 1905 or Satyagraha in 1930, movements have shaped the history of India by telling incumbents that all governments must work for people — or perish.

In recent history, we have seen governments respond to public complaints of price rise or broken law and order when the opposition turned these issues into political tools and took to the streets.

The Jayaprakash Narayan-led opposition in the mid-1970s pitted against Prime Minister Indira Gandhi showed the till-then-invincible Congress that no reign is permanent.

An incident like what has happened in Unnao should have drawn Mayawati, Akhilesh Yadav and Priyanka Gandhi Vadra to the streets, holding protests outside chief minister Yogi Adityanath's office — but none of that is happening.

Twitter is instead the protest platform from where customary tweets have gone out — liked, retweeted, criticised, and supported.

For God’s sake, Mr. Prime Minister, divest this criminal and his brother of the political power your party is giving them. Its still not too late.#BJPSackSengar

Maintaining the rule of law is the responsibility of the government — and seeing to it that the government is called out when it fails in its duty is the role of the opposition.

On July 30, the issue of the Unnao victim was raised again in the Lok Sabha. That, however, is clearly not enough to force Yogi Adityanath in Uttar Pradesh to ensure that MLA Kuldeep Singh Sengar is suspended from the BJP pending inquiry.

Mayawati's reading out of a statement and Akhilesh Yadav and Priyanka Gandhi's tweeting or talking about the issue in response to questions raised by the media is not the way a formidable opposition should function.

Those in public life are committed to raising people's issues — irrespective of whether their party wins or loses an election. Every time an election is announced, they will have to go tell people how they stood for their causes. Stitching up a rag-tag coalition based on caste calculations is not going to help win power — a fact that became evident on May 23 when the Lok Sabha election results were announced.

Arvind Kejriwal won power in Delhi based on the politics of agitations. His problem is that he made it disruptive. Opposition parties in UP will have to draw that line if they are at all serious about giving any competition to Yogi Adityanath in UP.

Votes are cast depending on who did the job better.

Agitational politics is important for democracy.

It is important for the existence of the opposition itself.

#Mayawati, #Priyanka gandhi vadra, #Unnao rape case, #Unnao rape victim
The views and opinions expressed in this article are those of the authors and do not necessarily reflect the official policy or position of DailyO.in or the India Today Group. The writers are solely responsible for any claims arising out of the contents of this article.