Is the UP voter deliberately leaving everyone confused?

The fight on 403 seats will establish Modi either as a people’s champ or will bring him disappointment.

It’s the season of mustard, wheat, grapes, oranges, journalists and elections on the dusty roads of UP. The most populous state of the country, Uttar Pradesh, is now in the last stage of electoral battle.

Mediapersons, political scientists and netas from different parties are on the job and struggling with the question - who is going to rule UP?

According to professor Badri Narayan Tiwari, a social historian and cultural anthropologist at GB Pant Social Science Institute, University of Allahabad: “This is one of the confusing elections of the last few years, as voters are not disclosing whom they would actually vote for.”

For the seventh phase of the election, Poorvanchal is in the limelight. It is the eastern part of the state, extremely backward with 89 seats to contest.

The SP and Congress alliance is in no way similar to the mahagathbandhan of Nitish Kumar and Lalu Yadav which came ahead to confront the BJP in Bihar. 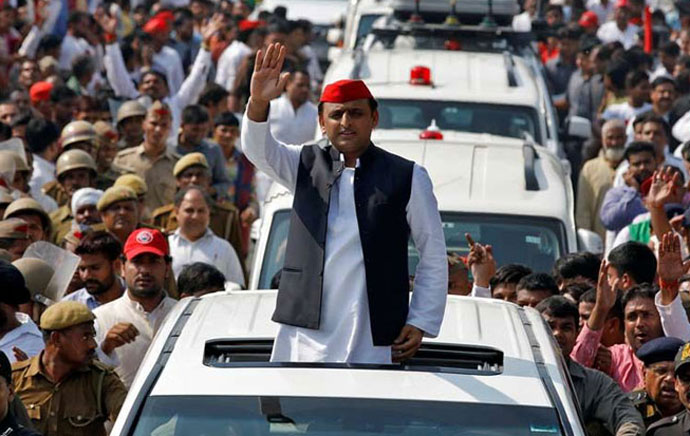 The SP and Congress alliance is in no way similar to the mahagathbandhan of Nitish Kumar and Lalu Yadav.

The BSP is working hard to gain its previous glory. As there seems to be no wave for any particular political party, VIP presence has suddenly increased in Banaras, and in the surrounding areas where PM Narendra Modi is holding back-to-back rallies criticising his opponents and promising incentives for the people.

Though each party claims to be winning, a fierce two-way contest is expected here between the BSP and BJP.

When the Modi government assumed office in 2014, it assured the youth that it would create 250 million jobs over the next ten years. This works out to 25 million or 2.5 crore jobs per year. But only 1.35 lakh jobs were created in 2015 and 4.93 lakh in 2014 across eight sectors, according to the Labour Bureau of India.

The manufacturing sector is the only important sector which can give jobs to semi-skilled youth who are migrating from rural to urban areas. Three years to complete, the PM is yet to fulfil youth aspirations.

Almost half of UP’s 140 million electorate is also under 35 years of age. As many as 25 lakh voters (18-19 years) will vote for the first time with another 38 million (20-29 years). The youth of UP is still looking forward, expecting something from Modi on this line. Silence and hard labour is the way BSP works.

Parbhat Verma, student of LLB from Banaras Hindu University, has a different concern. “In 2014, the government spoke about creating crores of jobs, but for youth like us, are they skilled enough to get jobs in this competitive market? The government should develop the skills of youth because our education system is rotten and we don’t have skilled people.”

When asked whom he thinks should win the elections in UP, his simple answer was “the government at the Centre and state should be different, there shouldn’t be dictatorship”.

Professor Tiwari sees no Modi wave like the 2014 general elections, but he finds that he is still a famous figure in the state as he is a good orator who communicates with people in their own language.

“Up to 7- 8 per cent of youth are ‘switch voters’ in this election and 70 per cent voters are the ‘base’ voters of political parties. The rest of the undecided group will tilt towards the last minute wave. It depends on the dominance of the leader, distribution of liquor, money etc. The undecided or floating voters can change the whole scenario,” Tiwari said.

Rudra Dubey, a soft-spoken 21-year-old first-time voter from Banaras has already made up his mind. “There are two types of voters, the first one who decides in advance whom they are going to vote for, and the second one who goes along with the wave. I am the first kind of voter, and I am going to vote for Modiji," he said.

When asked why, he explains confidently: "He trumped India’s name in western countries, Pakistan is afraid of India since he came to power and he was in Gujarat for three consecutive terms, there were never any riots."

At "parivartan sankalp" rally, March 3, Modi hit out at BSP chief Mayawati and took a jibe at the Congress and Samajwadi Party, saying the alliance will get a jolt on March 11.

Mangla Parsad Dubey, a bearded and long-haired guy wearing a saffron kurta and BJP cap, wants to vote for Modi. “Because of him Indian soldiers screwed the Pakistan army,” he said in a loud voice. This election will be decisive for the Narendra Modi government.

A sizeable number of women also came to listen to the PM. In a bright sari, Rita Singh Patel, a house-wife in her mid-thirties, came from a nearby village. When asked about Modi, she said: “He is our god. I enjoy listening to his speeches."

Soon after the PM started addressing the crowd, among the chant of Modi, Modi, many people started leaving the ground. Following a man in a pink shirt, I ask why he was leaving.

With an embarrassed smile, Pappu Kumar Bhind said he had got Rs 200 to attend the rally but it was hot and he wanted to leave. He also has to attend another rally. “I am going to attend Behenji’s rally as she is our leader. Behenji ke chances strong hain.”

The land of UP is not generous to its rulers. After every five years power shifts. Caste remains the trump card. However, the BSP couldn’t secure a single seat in the election of 2014.

Silence and hard labour is the way BSP works. It works within communities, attempting to knit them into a single thread. Their basti communities are well organised. In this election, where SP and BJP hoardings and posters can be seen everywhere, BSP’s posters are less.

The BSP boasts of securing 220 seats. History shows that the party securing 30-31 per cent seats forms the government in UP. Dalits will reserve 21-22 per cent; additional 9-10 per cent will be the target. Brahmins make up 8-9 per cent votes.

The problem is which party is going to secure this vote. The BJP, once branded as a Brahmin-Baniya-Thakur party by the BSP, is trying hard to garner this vote.

“In this election, Dalits, in a very cohesive way, are going to vote for Mayawati. Mayawati is consolidating her Dalit votebank,” said Badri Narayan.

Lalu Prasad, a 30-year-old Hindi-speaking die-hard fan of Modi, is preparing for the civil services exam. He believes Modi should get more time to perform. “It’s just been three years; our administration has been rotten for a long time. It’ll take time to improve it,” he insisted.

When asked about the distribution of laptops, mobile phones etc, announced by different parties, he thinks these are samajvadi (socialism) welfare-related schemes which are good and bring different sections of the society on an equal footing. Though he wants a BJP-led government at the Centre, he is not going to vote the BJP in UP.

“There should be competition among the state and Centre because competition brings benefit for common people,” he said.

The sari mandi and the weavers

Varanasi is famous for Banarasi silk sarees. The silk industry is in crisis for a long time. Demonetisation created more problems. Large production of garments, race with China and moving from operating handlooms to powerlooms are posing challenges.

But Rajan Behal, the general secretary of the sari mandi in Banaras’s chowk, a congested market with narrow lanes, affirms that his business has been doing well since PM Modi came to power. Around 150 weavers work under Behal’s textile company.

He also sees demand for handloom product being high but production is very low. When asked about the reason, he said: “The new generation of weavers is not interested in working hard, they want things easy, so they work in powerlooms. We are even ready to pay Rs 500- 700 per day but it’s tough to get weavers.”

Looking for answers I went to Jaitpura which is 3-4 km from chowk, where in almost every home there is a powerloom or handloom machine. The sound of machines draws the attention of passersby.

Shabuddin, who is in his mid-thirties, earns his living from handloom weaving. After working for 12-15 hours each day he is able to get Rs 300 for his work.

“The government provides different incentives to weavers but to get those facilities we have to spend 2-3 days running behind officials. If I don’t work a day, I can’t feed my family," he said.

After November 8, 2016, when the government demonetised 500 rupee and 1,000 rupee notes, it hit his business hard and for several weeks he didn't have work.

When asked whether it was true that gaddidar (traders) are willing to pay them Rs 500-700 per day for handloom work, he denied any such thing. He complained of rich shopkeepers.

He agreed that as the new generation is getting education, they are now looking for other opportunities, but those who are engaged in the industry are not getting proper money for their work.

“During notebandi, many gaddidar bought our products at cheaper rates. They exploited the poor further,” said Shahbuddin.

Mayawati, in her rally on February 25, promised to make Purvanchal a separate state if she gets elected. She also promised to relieve weavers of their problems soon. She is not alone. Modi promised to open the international market for weavers in 2014.

In the fourth phase of election, Allahabad voted on February 23. Famous all over the world for its Allahabad Surkha, a variety of guava, this time the guavas taste bitter for farmers and its traders.

Tariq Sayeed, who has been in the guava exporting business for a long time, doesn’t see anything having changed on the ground since Modi came to power.

“During the 2014 elections, Modi promised to bring processing plants and factories for guavas, as well as to develop the tourism industry for Sangam, but it’s all lies that he spread everywhere - he did nothing for the people of UP,” Tariq said.

Gulzar Ahmed, a guava farmer in his mid-sixties, who takes lands on lease and grows guavas to sell them in Allahabad Mandi, has been in loss since the demonetisation drive and disappointed with Modi. “He destroyed us,” he said.

Back in Banaras, Modi’s magic continues to prevail as he is also an MP from there, but others in his party may not have his charisma or mass appeal. Also not everything is good in BJP’s Banaras camp.

Shyamdeo Rai Chowdhury, who has won this seat in seven consecutive Assembly elections, was denied a ticket this time by the BJP high command, a move that has become the biggest talking point. Confusion also remains on the chief ministerial face.

In this situation, the party will have to hinge on the fame of PM Modi. Experts believe Modi is preparing for the 2019 elections from Banaras.

But professor Tiwari perceives that projecting Modi in the UP election and asking for votes on his behalf is a dangerous game.

“As there is no CM face of the BJP in the state, if the party loses the election, it’s going to hurt the image of Modi in the 2019 election. But he always takes risks,” he added.

Different people and groups cast their vote with different demands and hopes. But this election will be decisive for the Narendra Modi government.

The fight on 403 seats will establish Modi either as a people’s champ or will bring him disappointment.

Also read: Why UP election results could shock BJP

Post your comment
#Narendra Modi, #BJP, #Assembly elections 2017, #UP Elections 2017
The views and opinions expressed in this article are those of the authors and do not necessarily reflect the official policy or position of DailyO.in or the India Today Group. The writers are solely responsible for any claims arising out of the contents of this article.