This is what poet Dagh Dehlvi (1831-1905) wrote towards the end of the 19th century. Dagh's claim of an Urdu "dhuum" across Hindustan might sound naive today, but in the age he was writing in, and even much later, Urdu, more than any other language, united India.

Urdu was born as a language of the commoner in India - actually around Delhi - from dialects including Braj Bhasha, Mewati, Khari Boli and Haryani, which, in turn had developed from Apbhransh. Today, Urdu, like the Taj Mahal, is Muslim.

In Uttar Pradesh's Aligarh town earlier this week, a newly elected Muslim corporator from the Bahujan Samaj Party (BSP), Musharraf Husain, was beaten up for insisting that he would take his oath in Urdu. 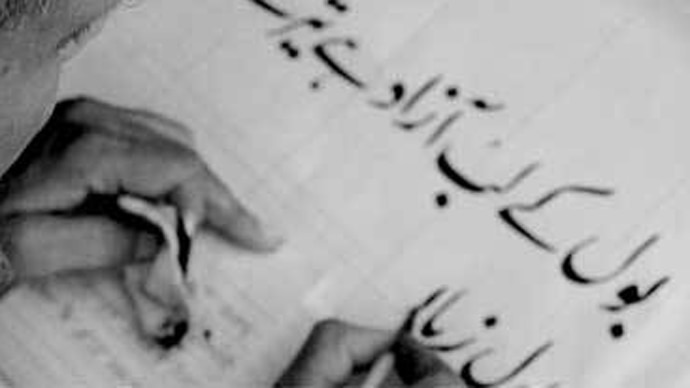 Urdu is the second official language in Uttar Pradesh.

A day later, Husain was booked by the Aligarh police for "trying to outrage religious feelings". The cops have also refused to register Husain's complaint on his beating.

The police even admitted that while the Constitution allows Husain to take his oath in Urdu (it is one of the 22 scheduled languages), his act had hurt religious feelings.

This, when Urdu is the second official language in Uttar Pradesh, just as in various other Indian states.

So, why was Husain roughed up for exercising his cultural and constitutional rights of taking his oath in a scheduled language?

Is it because majoritarian Hindutva, now a part of the state apparatus, is hell-bent on denying Muslims even their constitutional rights? Or, is it the apparent reality that the Constitution doesn't matter anymore? The might of the Hindu state is the new constitution, and India's Muslims its true aliens.

The keyword is hate, now being normalised by either denying a Husain his language, a Hamid Ansari or an Ahmed Patel their patriotism, or an Afrazul (and many before him) his life.

It's not that a fresh and more aggressive onslaught of Hindutva, aided by the BJP winning the Centre and most states since 2014, that has made Urdu Muslim. The language, since partition especially, has been "othered" in the Indian linguistic tradition.

It is also no coincidence that the chief preoccupations of mainstream Muslim politics in independent India - Urdu, Muslim Personal Law Board, AMU's minority character - have witnessed a specially vicious assault by the Hindu Right.

Despite the emotional politics around it, Urdu language could not become a source of livelihood for its speakers. If English was adopted as the language of progress, Hindi became the nationalist marker.

Yet, it's almost impossible to imagine the Indian popular culture, and its vast inventory of both popular and classic literature, without Urdu. Just as there is no India without its Muslims, there cannot be a Hindi (in whatever way we know it) without Urdu. Even "jumla" is an Urdu word!

In the end, as one goes back to Dagh's celebration of Urdu as a national language, one can't help but remember a couplet by another great Urdu poet, Faiz Ahmad Faiz:

Wo intizar thha jiska, ye wo sahar to nahi.

This is not the dawn that we had longed for.)

Also read: My mother tongue is Urdu, I write in English, call myself Hindustani