While the routine briefings were being announced on live television, the political fraternity sounded a nationalist "Yippie" in unison.

As the joint press conference by Director General of Military Operations, Lt Gen Ranbir singh and ministry of external affairs spokesperson Vikas Swarup made the announcement that Indian Army had in fact conducted surgical strikes across the Line of Control on Wednesday late night, based on specific intelligence input of terror groups ready to infiltrate into India and carry out terror attacks, Indian social media, as well as mainstream news outlets, went into overdrive.

For a few days, a possible Special Forces operation had been talked about in WhatsApp groups and a digital publication even had done a piece (which now many say wasn't that "premature") on strikes across the LoC.

Sources said strikes on terror launch pads lasted from 12.30 am to 4.30 and the location was 500 metres-2km across, the soldiers were helidropped and Indian side suffered no casualties.

It has been a matter of serious concern that there has been many infiltration bids by terrorists at LoC: DGMO pic.twitter.com/H5lpjYduG6

This is reflected in the terror attacks in Poonch and Uri on 11th and 18th September resp: DGMO Lt Gen Ranbir Singh pic.twitter.com/tIn5XN7EfK

Despite our persistent urging to Pak to not allow territory under its control to not be used for terrorist activities nothing was done: DGMO

Indian DGMO said he communicated his concerns to his Pakistan counterpart.

I spoke to the Pak DGMO, shared our concerns and told him that we conducted surgical strikes last night: DGMO pic.twitter.com/s0ntc1Q5DX

The motive of this operation was to hit out at the terrorists who were planning to infiltrate into our territory: DGMO

As the press conference went on, Indian news and social media reacted with immediate and expected intoxication. 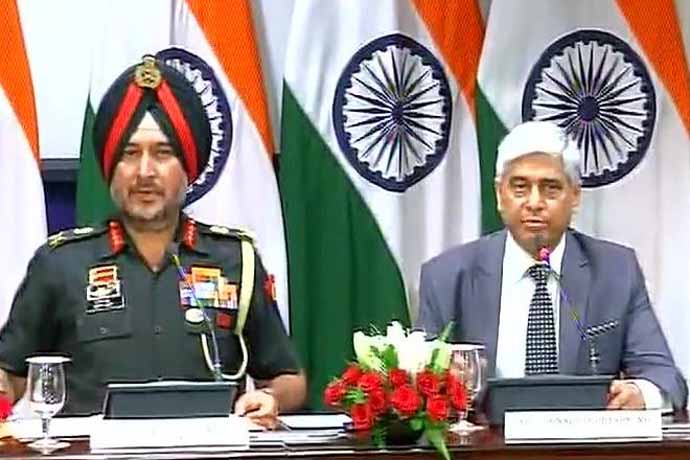 While the routine briefings were being announced on live television, the political fraternity sounded a nationalist "Yippie" in unison.

One of the first to go Bharat Mata ki jai was obviously Arvind Kejriwal.

However, even the Congress wasn't too far behind as it kept aside its differences with the Narendra Modi government and issued a nationalist and suitably patriotic statement.

Congress president Sonia Gandhi, whose eerie silence in the wake of Uri attack had got many tongues wagging, put out a "mature" statement.

The clamour to sound more patriotic than thou kept the Congress leaders on their toes, er finger tips.

INC wholeheartedly supports the surgical strike on terror pads in POK by Indian Army. Salute the valour of our armed forces.

We congratulate the Indian army for undertaking surgical strikes on terror launch pads.We stand completely behind our Armed Forces

If our army has taken a decision, the whole nation will support them: UP Congress President Raj Babbar pic.twitter.com/LKya5oZmKw

But obviously, the biggest and the loudest soundbytes were coming, yes, in addition to Times Now and other news channels, from the BJP camp. No less than the BJP national secretary, Amit Shah, "congratulated" Prime Minister Narendra Modi in as many words. [Insert 56-inch chest-thumping after every word, please.]

Indian Army has inflicted heavy damage on terrorists, without any casualty, reaffirms Army's valour and commitment to nation's security.

It is for the first time, in this frontal fight against terrorism, India under the leadership of Prime Minister Shri Modi is feeling secure.

I again salute the valour of Indian Army for giving befitting reply to those attacking innocent Indians & ensuring zero tolerance on terror.

Notes of denial were sounded from Islamabad, with Pakistan Prime Minister Nawaz Sharif issuing a whiny and quite delusional "condemnation" of India's "unprovoked and naked aggression".

Ditto was said by Pakistan defence minister Khawaja M Asif, and you nod your head in realisation that how similarly are the official statemnets prepared in these two quasi-warring nations.

Updates on unprovoked & naked aggression of Indian forces that took place in the wee hours of last night... pic.twitter.com/KfgOf7MvKT What's nationalism if not in capslock?

Clearly @PMOIndia has changed the rules of the game. Carry out strikes and own it. When Durand Line hots up. Pakistan cant fight on 2 fronts

Army Chief calls key veterans for an emergency briefing so that they can shape the narrative while speaking on TV & writing articles.

Nationalism of the future tense, involving stuff that actually happens when surgical strikes, well, go on.

"Pakistan will deny surgical strikes by India to look for facesaver" say sources "but Forces have Evidence, will release when appropriate"

"Mass anger after #Uriattacks was like massive anger after Nirbhaya rape" says one source. "It called for Action, not diplomatic tinkering"

May have got this wrong, but are these the locations where ISPR reported firing? (https://t.co/PwHIYo4LYu) pic.twitter.com/rDwtkbwiIm

Novelty here isn’t the fact that India crossed the border, but that it’s announced it with so much fanfare. Guarantees a Pakistani response.

When India says significant casualties to "the terrorists and those who are trying to support them", assume latter must be #Pakistan Army.

India's real revenge on #Pakistan will likely be carried out inside Pak by Pakistanis. Hints in PM's Kozhikode speech. #ModiPunishesPakistan

Childish to believe that with gents like Modi and Doval in charge, there won't be retaliation :-)SAARC and surgical strikes just trailers

Great strike by Army!right response to a terrorist bully Pak!high moral stand by India for last 69 years have failed!@narendramodi RT

Hype is created here in media. Hopefully, leadership on both sides is more mature. https://t.co/Sc8ajQUpjc

In the bad old days, journalists used to ask to see some evidence of claims at briefings. So glad we’re done with that

India should speak in a language Pak understands, said @narendramodi years go. And he has done just that. #ModiPunishesPak

4/ Then there's the other way: you jump the cat by stealth, do the job. Good so far. Then you go apeshit with your macho complex, the all...

5/ ...encompassing urge to whip out your member and show it to the whole world, just in case you had insecurities in that department.

Oh, and here's the complete lowdown on the Indian Army op.