On Thursday, US vice president Mike Pence accused China of using its military, intelligence agents, economic power and propaganda to undermine the US across the world and reiterated an unproven claim that China is seeking to influence US domestic politics. The speech at Hudson Institute, amounted to the US directly declaring China as a malign adversary.

It should be clear by now that the trade war is not about trade, but about the US seeking to contain the rise of China. The US appears to be working on a multi-pronged policy that will see, first, a major show of strength in the South China Sea as a warning to Beijing. Second, a strategy to remove China from the centre of the global supply chains. And, third, encourage multinational companies like Google or Samsung to take their businesses out of China.

Some of this became clearer in recent days when the US said it had worked out its trade issues with Mexico, Canada and South Korea. Mexico accepted new rules relating to the manufacturing of cars, as well as the wages of workers making them.

Korea agreed to buy more American cars and agricultural products and Canada conceded more market access to US dairy farmers and cap its auto exports to the US. But in both cases, the original trade pacts remain largely untouched. Japan, which was reluctant to engage in a bilateral trade deal with the US, will now enter into negotiations for one.

This is in sharp contrast with what it happening to the Sino-US trade issue. On Monday, September 24, the United States and China imposed tariff hikes on each other’s goods. The US put a 10 per cent tax on some 5,745 Chinese products, including bicycles, furniture. China retaliated by 5- 10 per cent additional taxes on 5,207 goods ranging from honey to industrial chemicals. Trump has threatened to put additional tariffs of another $267 billion worth on Chinese goods if Beijing retaliates. But this step remains to be taken. 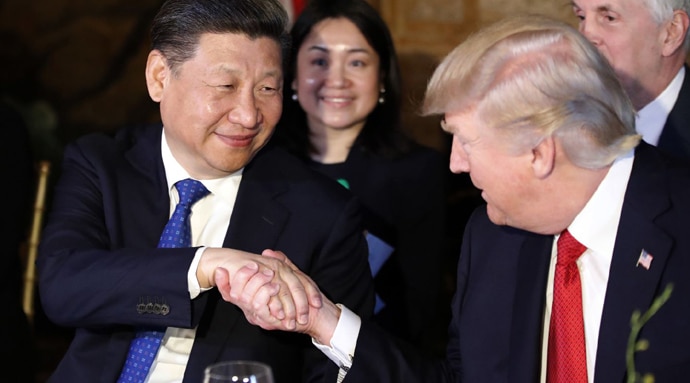 The United States and China have imposed tariff hikes on each other’s goods. But what next? (Photo: Reuters)

But the die has been cast. For a while, it appeared that the US and China would keep trade and their political relations apart. But, increasingly now, both are overlapping.

This became evident in President Trump’s charge at the UN Security Council on September 26, that China was interfering in the upcoming US elections and these activities were linked to the ongoing trade disputes between the two countries. He said that “China has been attempting to interfere in our upcoming 2018 elections coming up in November against my administration.” Without providing any evidence, he said that “they do not want me or us to win because I am the first president ever to challenge China on trade.”

On the same day, in a press conference he held, Trump declared that China’s President Xi Jinping “may not be a friend of mine anymore.”

At the event, he also claimed that the US had evidence of the Chinese actions. Some hours later, in a background briefing, an unnamed US official charged that China had targeted farmers and workers in districts that make up part of Trump’s electoral base. Trump’s ire was on the China Daily’s paid inserts in a newspaper in Iowa criticising US trade policy.

A fallout of this has been on the military-to-military ties between the two countries. Last week, on September 20th the US State Department announced that it was imposing sanctions on the Equipment Development Department of the Central Military Commission and its Director for violating the CAATSA because China was purchasing Russian S-400s and Su-35 fighter jets.

China was outraged recalled a visiting naval official from the US and summoned the US ambassador to China to lodge a protest. At the same time, it announced that an upcoming meeting of Chinese and American officials would be cancelled.

Beijing also denied the request of a US warship to visit Hong Kong. And, even as Trump was questioning the state of his friendship with Xi in New York, US B-52 bombers flew over the South China Sea twice in three days. Earlier, in May, the US had decided to disinvite China from attending the 2018 RIMPAC military exercise.

The big question in everyone’s mind is whether US and China are slow-marching to an armed conflict? Are forecasts about the Thucydides Trap, where an established power seeks to prevent the rise of a potential rival, coming true?