With the US ramping up sanctions against countries deemed as "enemy nations", India is in a bit of a spot. Russia and Iran are both under sanctions. As the world’s largest economy, the US finds sanctions an effective diplomatic weapon to put pressure on its enemies. Countering America’s Adversaries Through Sanctions Act (CAATSA) is now a major tool to scarce away all those who wish to defy the US. Countries doing business with America’s enemies will also come on the radar and bear the brunt of US sanctions.

India, which does business both with Russia and Iran, is likely to be hit hard. Despite growing warmth in ties with the US the spin-off may adversely affect India’s relations with the US. From being on opposite sides of the Cold War divide, India-US ties underwent a dramatic change since the signing of the civil nuclear deal in 2005. US versus them: India has said that it only follows UN sanctions, not US sanctions on Iran. [Credit: Reuters photo]

The ties have blossomed under Prime Minister Narendra Modi and President Donald Trump. But sanctions now have become a major hitch.

Successive Indian governments have followed a policy of not honouring sanctions slapped unilaterally by any country. Only sanctions which are endorsed by the UNSC is followed by Delhi. Foreign minister Sushma Swaraj made this point clear at her news conference on Monday (May 28). "India follows only UN sanctions and not unilateral sanctions by any country.” Indications are this policy is not about to change.

India’s defence ties with Moscow run deep, more than 70 per cent of equipment come from Russia, though in recent yeas both the US and Israel are also competing for India’s lucrative defence market. India has defence deals worth nearly $12 billion in the pipeline with Russia. Will all these go under, thanks to the latest round of US sanctions on Russia? In the spotlight is the S-400 Triumf air defence missile system, which New Delhi has zeroed in on and about to sign the $5.5 billion deal.

A group of visiting US lawmakers, led by William Thornberry, chairman of the House Armed Services Committee, told a select group of defence correspondents on Monday, that Washington wants India not to sign this crucial contract with Russia. Though US values India’s partnership and does not want the sanctions on Russia to hurt India, this particular defence deal was of concern to Washington. India is in no mood to follow the US diktat. The US is keen that India scraps this major pact. The delegation also clearly said that sale of high-tech US equipment to India, like armed drones could be stalled if India went ahead with the air defence shield.

During Prime Minister Modi’s informal summit with President Vladimir Putin in the Russian resort town of Sochi, India assured Russia that it would not backtrack on its commitment to acquire the S-400 air defence system. In fact, a major part of the Modi-Putin conversation was on ways to get round US sanctions on Russian entities involved in supplying defence equipment to India. By travelling to Russia for the meeting, Modi has clearly signaled that India is not moving into the US orbit, as many predicted. This was perhaps because India’s engagement with the US seemed to far outshine its old friendship with Russia. In an ever-changing world order, Delhi has realised the importance of having multiple choices instead of tying itself to the American band wagon.Putin too has realised the importance of re-invigorating ties with a major country like India.

In the past, India and Russia had often worked around nuclear sanctions. The Kundankulum nuclear power station in Tamil Nadu is one such example. The Nuclear Suppliers Group had slammed Russia, for giving India nuclear know-how at a time when New Delhi refused to allow inspection of its nuclear facilities. This was because India refused to sign the Nuclear Non-Proliferation Agreement on the grounds that it was discriminatory, while Russia had already signed up. The Nuclear Suppliers Group tried to stop Russia’s bid to add more units to Kundankulam power plant without IAEA inspection of the facilities. Moscow pointed out that the original agreement with India predated April 3, 1992, when the new NSG guidelines entered into force. Russia went ahead despite vehement criticism by NSG member states. But circumventing the US would no longer be as easy, considering an unpredictable American president like Trump is in office.

But the US also needs India for its market as well as for strategic balance in Indo-Pacific. In fact, it had often proposed joint patrols in the Pacific and wants India to be much more active in the region to balance China’s growing assertiveness. While America is likely not to push India too much so it goes back to the Russian fold, it would perhaps allow Delhi to purchase some military equipment from Russia. But the defence shield is a big no from Washington. 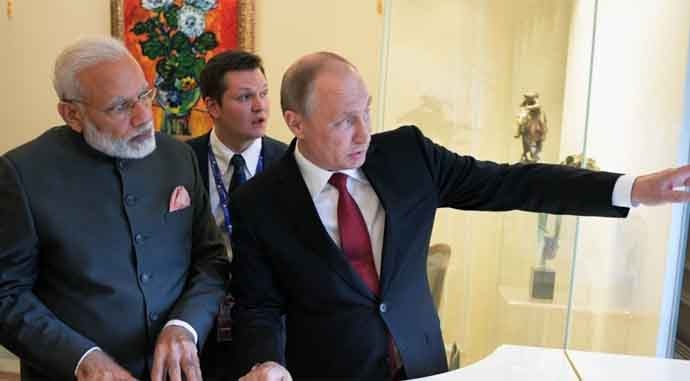 Friends forever: India and the US do not see eye to eye on Iran and Russia. [Credit: Reuters photo]

New Delhi is keen to acquire this and is also not in a mood to back down. Details of the talks between Modi and Putin are not known, but the two sides will do their best to save the deal.

On Monday, the other visitor to New Delhi was Iran’s foreign minister Javed Zarif, who met Sushma Swaraj in the evening. Saving the Iran nuclear deal, despite the US walking out, is very much on Tehran’s agenda. Zarif has been travelling to Europe and discussing with European partners how to save the deal. Zarif briefed Swaraj on his talks with countries willing to stand by the deal. This includes most European nations, including Germany and France. Britain is also on board. India is with Iran and the UN on this.

Sanctions on Iran is likely to affect India’s strategic interests in the region. Developing the Chabahar Port and using it for trade with Afghanistan and Central Asia has long been New Delhi’s way of by-passing Pakistan, which does not allow Indian goods to pass through its territory. From Chabahar, the existing Iranian road network links to Zaranj in Afghanistan, about 883km from the port. The Zaranj-Delaram road constructed by India in 2009 can give access to several major towns inside Afghanistan. However, with US sanctions expected to hit Iran hard, Chabahar’s transition to a bustling trade and transport hub will remain unfulfilled for some more time.

India is hoping that the US may not disrupt connectivity through Chabahar because the port feeds into the Afghan network of roads. Economic activity and development of Afghanistan is very much a US goal. Whether or not the Trump administration will allow India to go ahead with the project remains to be seen.

India and the US do not see eye to eye on Iran and Russia. Whether this will impinge on India’s ties with the US is difficult to say right now. But differences on sanctions will persist and may ultimately hit India-US ties. India is a big country of 1.3 billion people and is no pushover as Donald Trump will soon realise.