In future, a sharp deterioration of China-US ties cannot be ruled out.

The Pentagon has released the US National Defence Strategy last week, shifting its focus, for the first time in over a decade, from fighting terror to preparing for what it believes is a threat from China and Russia.

The National Defence Strategy (NDS) is an important document which encapsulates the Trump administration’s defence policies in one place for the first time.

The NDS bluntly describes a US military that is losing its edge over potential competitors, and urges “increased and sustained investment” for “long-term strategic competitions specifically with China and Russia”.

The NDS also identifies three theatres of engagement for the US: the Indo-Pacific, Europe, and the West Asia that is consistent with what the Obama administration had been doing towards the end.

While the NDS specifically points out that “China is a strategic competitor which is using predatory economics to intimidate its neighbours while militarising features in the South China Sea”, the document blames Russia of violating the borders of nearby nations and pursuing veto power over the economic, diplomatic, and security decisions of its neighbours. 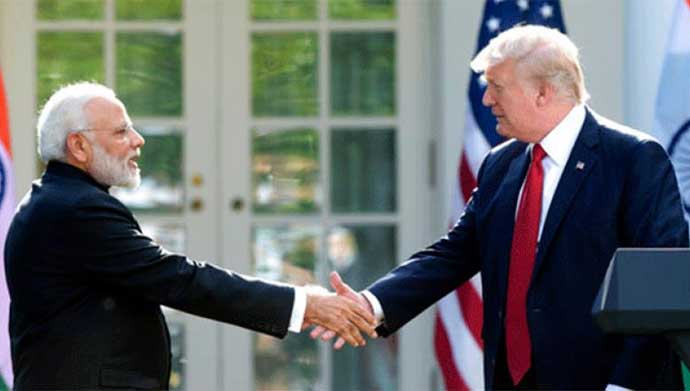 The unclassified synopsis of NDS 2018 acknowledges an increasingly complex global security environment, characterised by overt challenges to the free and open international order and the re-emergence of long-term, strategic competition between nations. The NDS states in clear terms about growing Chinese hegemony in the Indo-Pacific region and states on China "continues its economic and military ascendance, asserting power through an all-of-nation long-term strategy, it will continue to pursue a military modernization programme that seeks Indo-Pacific regional hegemony in the near-term and displacement of the United States to achieve global pre-eminence in the future”.

The Trump administration had also released its first National Security Strategy (NSS) last month on December 18, 2017. In principle, the strategy which has been outlined in the NSS document charts out the strategic objectives of Trump’s administration and also the ways to meet those strategic aims.

The NSS document describes the Indo-Pacific region as the most populous and economically dynamic part of the world and maps it as a stretch from the west coast of India to the western shores of the United States and reinforces its commitment to freedom of the seas and the peaceful resolution of territorial and maritime disputes in accordance with international law in the Indo-Pacific region.

The NSS reflects a growing consensus in the US that China is an adversary. The document is a frank acknowledgment of widely shared concerns about China’s rise. It is important here to note that the approach of Trump administration is a far cry from the Obama administration’s 2015 NSS which had welcomed the rise of a “peaceful” and “prosperous” China.

In future, a sharp deterioration of China-US ties cannot be ruled out, especially if Washington perceives Beijing as a hindrance when it comes to resolving the crisis in the Korean Peninsula. The Trump administration’s complaint of China’s bullying of other States using “economic inducements and penalties, influence operations, and implied military threats,” echoes fears spreading from Asia to Europe.

In the Indo-Pacific region, as far as New Delhi is concerned, the NSS “welcomes India’s emergence as a leading global power and stronger strategic and defence partner”. On the future course of action in the bilateral partnership between the US and India, the document mentions that the US will expand its defence and security cooperation with India which is a major defence partner of the United States, and will also support India’s growing relationships throughout the Indo-Pacific region. There is a specific mention in the document of the much-talked and debated “quadrilateral partnership” among the US, Japan, India and Australia in the Indo-Pacific region, and the NSS puts its stamp on it by mentioning the “Quad” for "free and open Indo-Pacific".

On the issue of maritime cooperation, Washington has time and again shown its willingness to deepen its strategic partnership with New Delhi and support India’s leadership role in Indian Ocean security and throughout the broader region which is reflective in the cooperation in the Malabar naval exercise. Terrorism in South Asia is one of the biggest challenges among other geopolitical issues and in a direct reference to it, the NSS states that “the US will press Pakistan to intensify the counterterrorism efforts, since no partnership can survive a country’s support for militants and terrorists who target a partner’s own service members and officials”.

Overall, the hypothesis of the NSS is based on the principle of realism in international relations as it defines the international system as one of great power competition in which the document specifically points out about Russia and China and portray them as “revisionist powers” challenging the status quo and identifies both the nations as strategic competitors or opponents of the United States.

The NSS also criticises past several decades of US foreign policy approach and points out that in past it was shaped by the misguided belief that "engagement with rivals and their inclusion in international institutions and global commerce would turn them into benign actors and trustworthy partners". This kind of realist framework in the conceptual context needs to be welcomed because it was long overdue departure from previous and successive administrations of the US.

Interestingly, the NSS neither makes any mention of China’s One Belt, One Road (OBOR) initiative nor mentions about the Asian Infrastructure Investment Bank, which together has the potential for a parallel Sino-centric sphere of influence in future.

The US needs to shed its obsession with zero-sum trade reciprocity and should come out with a coherent and comprehensive geo-economics strategy if it wants to preserve the US-led rules-based order and counter China’s grand strategy to carve out a parallel Sino-centric order or sphere of influence.

Also read: The truth about US clearing over $600 billion to boost defence ties with India

#Defence deals, #India-US Ties, #US defence strategy
The views and opinions expressed in this article are those of the authors and do not necessarily reflect the official policy or position of DailyO.in or the India Today Group. The writers are solely responsible for any claims arising out of the contents of this article.

The author is a research fellow with India Foundation.