What’s the colour of US President Donal Trump’s hair?

This question has confused US media for years because it changes more frequently than the US’s foreign policy.

Of late, Pakistani artist Hanifullah Khan was in the same dilemma as he was in charge of painting the face of Trump on a camel skin vase. This vase will be Pakistan Prime Minister Imran Khan’s special gift to Trump on his maiden’s visit to Washington as the PM. The duo will meet and the meeting is much anticipated given the strained relationship between the US and Pakistan share. 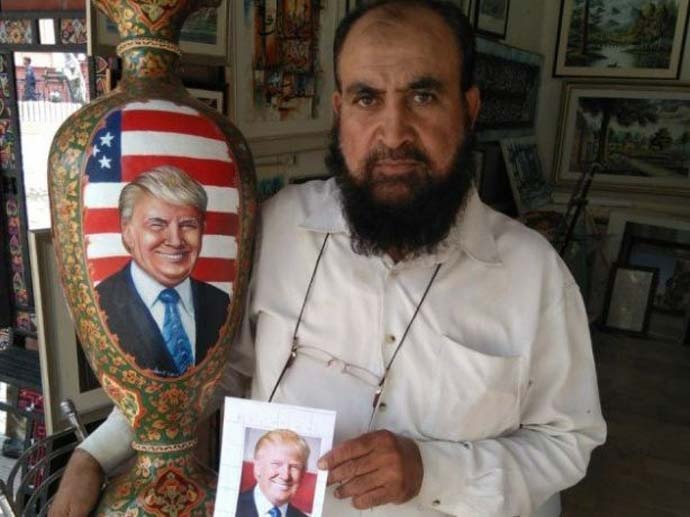 Painting Donald Trump's hair was the most difficult part, the artist has said. (Photo: Twitter)

The similarities between Donald Trump and Imran Khan are astounding. Both are celebrity-turned-politicians. Both apparently were people’s favourite before they took the power ride. Both are known for their famous slip-ups. But it’s unfortunate that two like-minded leaders do not like each other.

Last year, Trump suspended $300 million military aid to Islamabad saying that Pakistan has given the US “nothing but lies and deceit.” Imran Khan too took a potshot at the US President and described any potential meeting with Trump as “bitter pill” — which he is finally going to swallow on July 22.

Of course we should have captured Osama Bin Laden long before we did. I pointed him out in my book just BEFORE the attack on the World Trade Center. President Clinton famously missed his shot. We paid Pakistan Billions of Dollars & they never told us he was living there. Fools!..

Record needs to be put straight on Mr Trump's tirade against Pakistan: 1. No Pakistani was involved in 9/11 but Pak decided to participate in US War on Terror. 2. Pakistan suffered 75,000 casualties in this war & over $123 bn was lost to economy. US "aid" was a miniscule $20 bn.

The ties started worsening after Trump came to power but the rough weather started in and around 2011 when Osama bin Laden was killed in 2011 by the United States Navy Seals. The CIA had organized a fake vaccination programme in Abbottabad to get DNA samples from Laden’s family members. Pakistani physician Shakil Afridi helped the CIA. With his arrest, the relationship between the two countries took a nosedive as the present of the US intelligence in Pakistan was once again proved.

With Trump at the helm, things went downhill.

Trump-Imran Khan meeting comes at a time when Pakistan has a crucial role to play in the US-Afghan dynamics and is also under international watch for global terrorism.

Diplomacy is not all about strong actions. It’s about softer messages too.

And that message hidden in this traditional Multani artwork isn’t escaping the attention of the experts either.

Will the vase impress Trump?

Or, will he get riled up seeing his prominent double-chin and white eyebrows on this perfectly bizarre or bizarrely perfect painting?

But what we can tell is that Imran Khan will leave no stones unturned to bridge the gap between Islamabad and Washington.

Also Read: Warning bells: If US troops exit Kabul, and the Taliban holds sway, Pakistan could unleash 'Ghazwa-e-Hind' against India