The campaign for Georgia’s two senate seats could scarcely be more eye-catching. Perhaps fittingly for America’s number one ranked state for film production, the cast of characters contesting them is intriguing.

“Trump 2020: It’s America vs Communism,” bellows a billboard on Interstate 75, just north of Atlanta. It’s a big claim, but far from out of step with the political advertising currently pummelling Georgians as we enter the final days of this election campaign.

Much has been written about the states on which either President Trump’s re-election or a Joe Biden victory could hinge: Arizona, Florida, Michigan, North Carolina, Pennsylvania, and Wisconsin; but there is a sense that Georgia is among others now in play. The gloves are off in the fight for the Peach State.

The Republicans haven’t lost Georgia in almost three decades, and in rural communities, the state wears its conservative values on its sleeve. Churches, picket fences, farms and pickup trucks are ubiquitous here, as are yard signs imploring voters to ‘Keep America Great’ by sticking with the Trump-Pence ticket.

Demographics are, however, pulling Georgia into contested territory. Head into Atlanta, the cosmopolitan powerhouse city of America’s south-east, and the contrast is stark. Walking through its in-town communities, you could be forgiven for thinking a Democrat landslide was coming; such is the embrace of the Biden-Harris campaign. 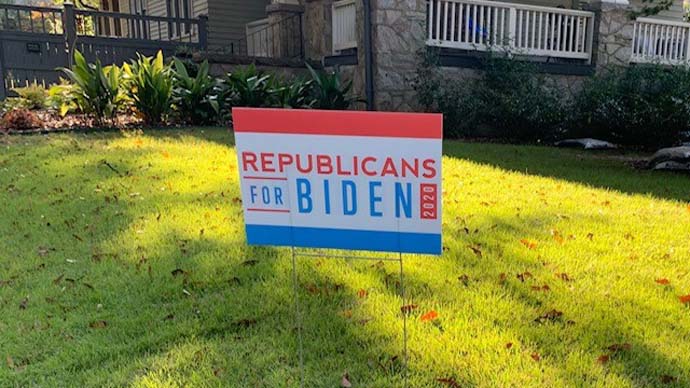 The Republicans haven’t lost Georgia in almost three decades, and in rural communities, the state wears its conservative values on its sleeve.

Atlanta was the birthplace of the civil rights movement, so its progressive history is storied; but the city is also the fourth fastest-growing in the United States and its influence on Georgia is increasing. Census data shows Atlanta’s population swelled by almost three-quarters of a million between 2010 and 2019; partly as a result, the state’s voter profile is now younger and more diverse.

A recent Quinnipiac survey put Biden ahead of Trump in Georgia by an eyebrow-raising seven points, and both parties are training their big guns on the state. President Trump and his son, Donald Trump Jr, have visited in the past week to rally supporters, while Jill Biden joined Atlanta mayor Keisha Lance Bottoms to bolster the Democrat vote.

The campaign for Georgia’s two senate seats could scarcely be more eye-catching. Perhaps fittingly for America’s number one-ranked state for film production, the cast of characters contesting them is intriguing.

Kelly Loeffler, the current occupant of the seat vacated by Republican Johnny Isakson, is the owner of the Atlanta Dream WNBA team and an avowed Trump devotee. One of her campaign ads sought to reassure more right-leaning voters that she was ‘more conservative than Attila the Hun’ while taking aim at ‘liberal scribes’ in the media. Loeffler’s supporters include congressional candidate Marjorie Taylor Greene, who has promoted QAnon conspiracy theories, called Jewish billionaire and liberal philanthropist George Soros a Nazi, and questioned whether a plane really did crash into the Pentagon on 9/11.

Along with a fellow pro-Trump Republican, Congressman Doug Collins, Loeffler is up against Democrat Rev Raphael Warnock, a pastor at Atlanta’s historic Ebenezer Baptist Church – where Martin Luther King once led his congregation. Warnock, who spoke alongside presidents Barack Obama, George W Bush and Bill Clinton at Congressman John Lewis’s funeral, has a preacher’s gift for oratory and his campaign is gaining momentum.

The Quinnipiac poll indicates the vote is headed for a run-off in January, while in the second Senate race it puts the urbane, progressive Democrat Jon Ossoff some six points clear of the incumbent Republican, conservative businessman David Perdue.

The contrast in styles, ideologies and campaigns could scarcely be more marked. But the battle for Georgia speaks to the political battles being fought across Donald Trump’s America.

In one in-town Atlanta street, among the Halloween decorations and Biden-Harris yard signs, a little placard sums up the issue: “Republicans for Biden” it reads. With the President’s popularity in question, the GOP faces an electoral dilemma; by focusing on the ‘Make America Great Again’ base that swept Trump to power, they risk alienating the moderates who may gravitate towards Biden’s less bellicose rhetoric.

If the lesson of 2016 was undoubtedly that Donald Trump’s appeal should not be underestimated; perhaps the question in 2020 is whether Republicans might overestimate it too.

Also Read: First US Presidential debate was a wake-up call for Trump admirers. Will the third be any different?

#Atlanta, #Georgia, #Republicans, #Donald Trump
The views and opinions expressed in this article are those of the authors and do not necessarily reflect the official policy or position of DailyO.in or the India Today Group. The writers are solely responsible for any claims arising out of the contents of this article.

The author is a CNN anchor and host of CNN International's CNN Newsroom with Robyn Curnow. She is based at CNN's headquarters in Atlanta.