US to grant India waiver from Iran sanctions: Can it be seen as a success of Indian diplomacy?

America's decision to grant a waiver to India (and seven other countries) on ending oil purchases from Iran by November 5 on pain of sanctions for not complying has avoided an unpleasant situation that risked causing appreciable damage to the steadily improving India-US relationship.

India, in principle, has no obligation to reduce oil supplies from Iran at US behest. Doing so would amount to India also sanctioning Iran for no offence caused to us. US sanctions have the force of US power, not international law, and compliance by India and others would mean succumbing to coercive diplomacy.

We have no policy differences with Iran over its regional policies. We can hardly object to Iran’s missile programme when Pakistan has a flourishing one and we have one of our own.

We have no quarrel with Iran on the terrorism issue.

For us, it is not Iran but Pakistan that is the epicentre of international terrorism. That on this issue Iran should be subject to draconian sanctions and Pakistan should escape lightly is another reason for us not to join in punishing Iran for its alleged terrorist misdeeds.

On the nuclear issue, while Iran is adhering to the nuclear agreement as certified by the IAEA, it is the US that has unilaterally repudiated a UN Security Council approved deal in disregard of the position of the other signatories. We have no policy differences with Iran. (Photo: Reuters)

Here again, Pakistan’s expanding nuclear programme and its nexus with China, its development of tactical nuclear weapons and its frequent threats of nuclear weapon use against India are escaping material censure by the US and the international community in general.

The difference in approach to Iran’s nuclear programme that is under international supervision and that of Pakistan’s is one that cannot be overlooked by India in approaching the Iranian nuclear issue.

Israel’s fear that a nuclear armed Iran will become bolder in promoting terrorism against it is precisely the experience we have with Pakistan that uses terrorism as an arm against us under cover of its nuclear capability.

Iran is important to us in other ways.

It is the third largest source of oil for India and the terms are more attractive than that of our other suppliers.

With India importing 82 per cent of its crude oil needs, and the price of oil shooting up because of concerns about Iranian oil going off the international market because of US sanctions, India’s position is vulnerable.

The impact of rising global oil prices on the price at which petrol is sold in India has important political repercussions for the government, especially in an election year.

Iran as a transit country for access to Afghanistan and Central Asia in the immediate through the Chabahar port and to Russia prospectively when the International North South Corridor project gets seriously implemented has strategic importance for us. For America’s short term reasons India should not be put in a situation of having to pay a long term price in managing ties with Iran. Iran is the third largest source of oil for India. (Photo: Reuters)

It is not a question of India choosing Iran over the US or ignoring the all-important ties with the US for the sake of a limited relationship with Iran — it is a question of having to subscribe, at the cost of legitimate national interest, to unilaterally decided immoderate US policies.

America is wrong to put its friends in such avoidable diplomatic quandaries. If India had not been given a waiver and sanctions had followed, the trust that has been building up in bilateral ties ever since the India-US nuclear deal would have received an erosive blow.

India has long suffered from US sanctions in the nuclear and missile areas and those of high and dual use technologies, but the last few years these sanctions have been lifted in great measure, and this enhanced strategic trust between the two countries.

Reverting once again to a sanctions syndrome in our ties would erase many of the transformative gains made in the last thirteen years or so, reviving concerns that America cannot be trusted and can change course whenever it suits its interests and that its longer term commitment to a relationship cannot be relied upon. 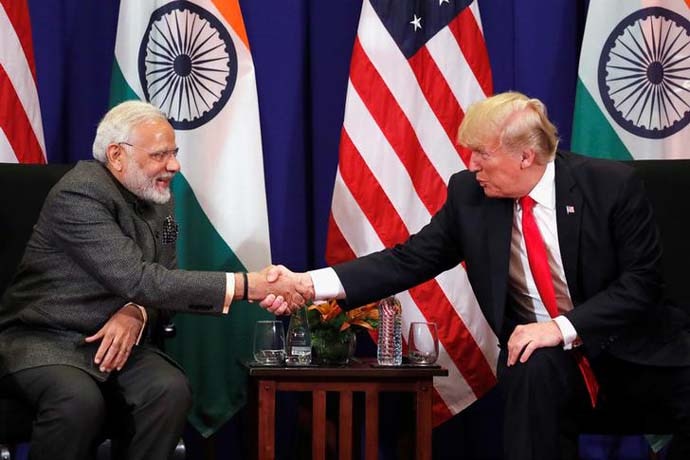 It is not a question of India choosing Iran over the US. (Photo: Reuters)

At one level, the waiver constitutes a success of Indian diplomacy in that we seem to have made an effective case for not being able to bring our oil trade with Iran to a halt by November 5.

The problem, however, is not yet over, because we will be expected to progressively show reductions of oil imports from Iran in the months ahead.

One can only hope that developments in the next few months will throw up some openings for India to continue oil trade with Iran, especially if Europe stands firm on protecting its commercial interests and resists the extra-territorial application of US laws. America has avoided a sharpening of the quarrel with China and Turkey by granting them waivers unilaterally. (Photo: Reuters)

The waiver given to the Chabahar project and the railway line to connect the port to Afghanistan is even more significant.

It shows a refreshing pragmatism on America’s part that needs acknowledgement and appreciation.

A final point: America has given a waiver to China, now seen as a strategic threat to US power, as also to Turkey with which its ties are under strain.

Both countries had announced that they would not subscribe to US sanctions.

America has avoided a sharpening of the quarrel with both by granting them waivers unilaterally. This would suggest caution in interpreting the waiver to India as an exceptional gesture.