New Delhi has to cover more ground for Washington to start taking us more seriously.

India-US defence relations are the flavour of the season. The US secretary of defence rarely comes twice to a country within a year, unless that nation is either creating a problem or is a special friend. But India is neither, not yet at least, so why this special attention? Is it because being democracies they are "natural allies?"

Due ad nauseum usage of this cliché but with precious little to show as results, it only draws yawns now. Is it due to geopolitical reasons that this embrace is being attempted by the Americans? The latter appears more likely and should be examined with due diligence.

The US rebalance to Asia to check China requires the Americans to have stable allies. Conforming to the "enemy's enemy is your friend" cliché, strange alliances have developed over the past three decades. Thus, Vietnam has a "comprehensive relationship" with the US, Subic Bay in Philippines will soon see the reestablishment of an American base and President Obama has twice visited Myanmar as part of the rapprochement with Yangon; the US has also midwifed the Trans-Pacific Partnership to balance the China-led Asia Infrastructure Investment Bank.

With the Russians feeling isolated, being short of finances and sanctioned by the West, it was logical for them to move closer to China, leaving India as the only big country that had not yet decided its vector in this friends-making game.

India is also assuming the mantle of a frontline state against the spread of radical Islam, not just due its secular character but also due its geographical location - countries East and West of it are pre-dominantly Islamic. It is a politically-stable fast-growing economy, and is trying to overcome the handicap associated with an absent defence industrial base.

Enter the US in the scene and on first look both nations appear to have a convergence of interests to partner each other in the defence materials front - India in need of cutting-edge technology and the US its provider. But there are issues that need careful analysis by the Indian establishment. 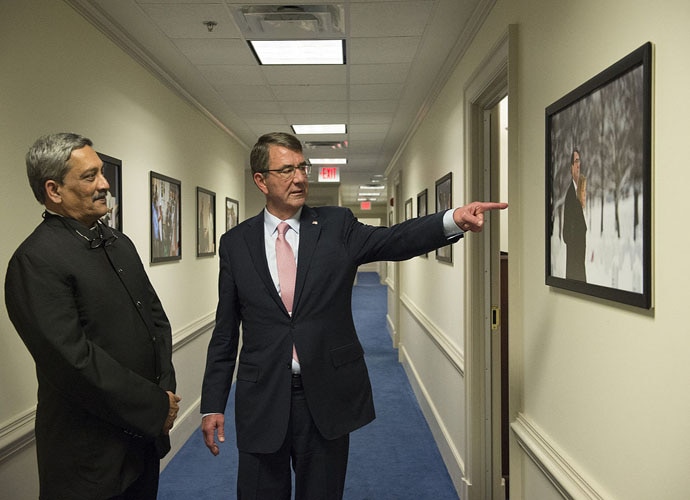 The joint statement after the Ashton Carter visit last week says, "defence relationship is a key component of the strategic partnership between India and the US". The starting point, thus, is "partnership" but the moot point is whether the two nations, disparate in many ways, can be partners in the real sense?

An article titled "Rebalancing US Military Power" in the Winter 2013-14 issue of US Army War College magazine Parameters says a partnership can succeed only if it is grounded in mutual indispensability, since "anything less creates a dependency, and a dependency by definition is not partnership". Are India and the US indispensable to each other? If they are not, then they cannot be true partners.

Taking cues from the Parameters article again, a test of indispensability can be done by answering questions about three possible partnership models. In the first, both parties should be equals, interchangeable and should be able to blend seamlessly.

In the second, both sides should be so implicitly intertwined that a division of labour is possible; thus, it should be possible to divide the tasks into sectors that can be shared equally towards a successful fulfilment of the undertaking.

And in the third test, the two sides should be able to complement each other such that expertise possessed by each party complements and fills voids that exist with the other.

Alas, in all three cases, the attempted India-US "partnership" does not pass muster due to the asymmetry that exists in technological and financial capability and capacity of the two nations. But can the same be said of the India-USSR defence relationship? If that was a true partnership, why not the proposed India-US is one?

The answer lies in the political indispensability of India that the USSR had to factor in, even as it brought its technological capability to the relationship; China and the US were USSR's antagonists and it could have ill afforded to dump India, like the US did with Pakistan after the Soviet withdrawal from Afghanistan - the US-Pakistan "partnership" broke due to loss of Pakistan's indispensability to the relationship, which earlier had been vital. The India-Russian partnership is still strong as India needs Russian arms, civil nuclear technology, among others, and the Russians need money and a foothold in South Asia.

Also read - US selling F-16s to Pakistan a double game

Does India have an indispensability quotient in the proposed partnership with the US? Sadly, no, as it is far from meeting the technology and financial norms to meet criteria #2 and #3 of a stable partnership.

India can become indispensable only as a political equal and whose services can blend seamlessly with the US as per the first criteria - that's a lot of ground to be covered.

If the US wants a true partnership, then it has to work towards making India indispensable to itself (the US) - that can happen only if it truly imbues a "special" friendly slant to its inputs in the relationship.

In the world of realpolitik, India alone has to ensure its interests in the geographical area it is placed, not the US; a situation of dependency needs to be avoided at all costs to retain strategic autonomy. Our eyes should be wide open.

#Pakistan, #Ashton Carter, #Defence, #India-US Ties
The views and opinions expressed in this article are those of the authors and do not necessarily reflect the official policy or position of DailyO.in or the India Today Group. The writers are solely responsible for any claims arising out of the contents of this article.