The Washington consensus on supporting the Pakistan army is fundamentally flawed.

The Armed Services Committee of the United States Senate has recommended the allotment of $800 million to Pakistan by way of coalition support funds for 2016-17, but made a portion of the military aid – $300 million – contingent upon Pakistan demonstrating that it has taken action against the Haqqani network. The US accuses the Haqqanis of conducting operations against its forces in Afghanistan.

According to a statement released by the Armed Services Committee, the US-Pakistan relationship is "critically" important and there is need for "enhanced security and stability" in Pakistan’s north-west region, and along the Afghanistan-Pakistan border. Pakistan is a major, non-NATO ally (MNNA) of the US.

There is a broad consensus in Washington, DC that cuts across the policy community, think-tanks and academia, that it is necessary to continue to support and strengthen the Pakistan army. The ostensible logic for this policy option that is steeped in realpolitik is summarised below:

"Pakistan is going down the tube for reasons that are well known. If it implodes, nuclear weapons will fall into Jihadi hands. Such an outcome is absolutely unacceptable to the United States. Hence, in order to ensure that nuclear warheads do not come into the possession of radical extremist elements, it is necessary to support and strengthen the Pakistan army as it is the only force for stability." 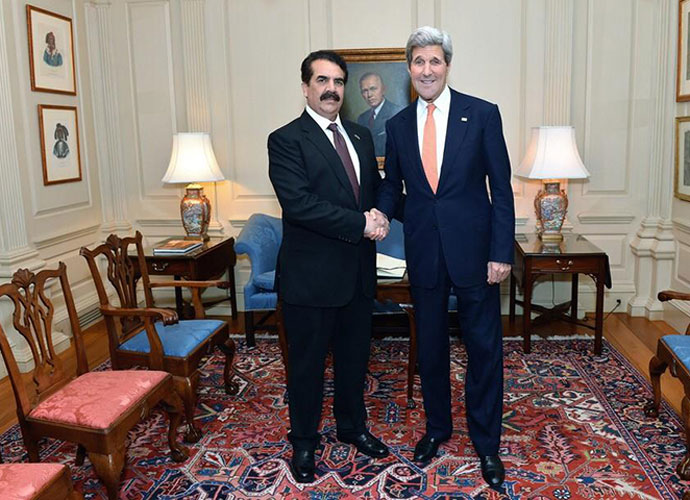 Pakistan has received over $12 billion by way of coalition support funds since the 9/11 terrorist attacks and the consequent NATO-ISAF operations in Afghanistan. The sale of weapons platforms like F-16 fighter aircraft is being considered by the US Congress, though now on part-payment basis and not as a free gift.

On completion of the draw down, many items of surplus military equipment have been handed over to the Pakistan army.

Also read: Pakistan must ask its army why it failed the country

However, Pakistan continues to harbour terrorist leaders like the Haqqanis. Mullah Mansour, the Taliban chief, was killed this week in a drone strike deep inside Balochistan. Despite this double crossing behaviour, General Raheel Sharif, the army chief, was wined and dined while on a private visit to Washington. He was received by John Kerry, the secretary of state and Ashton Carter, the secretary of defence.

Pakistan’s internal turbulence is a major cause of regional instability. The Pakistan army’s prolonged operations against home grown Taliban like the TTP and the TNSM; fissiparous tendencies in Balochistan; continuing radical extremism and creeping Talibanisation that has reached the Punjabi heartland; ethnic tensions, including protracted violence against the Shias and the Ahmadiyyas; and, the floundering economy, together signal the nation’s gradual slide towards becoming a "failed state".

As for the safety and security of Pakistan’s nuclear warheads, the real threat is that of the theft of radioactive material from nuclear facilities to assemble RDDs (radiological dispersal devices) – unless there is a jihadi-led coup from within the army.

Despite facing seemingly insurmountable internal security challenges, the Pakistan army and the ISI – together constituting the "deep state" – continue to sponsor terrorist attacks in India through extremist organisations like the LeT and the JeM. Their proxy war against India is now in its third decade.

Though it is being prosecuted at low ebb due to the need to concentrate efforts to fight the demons within Pakistan, the machinery is being kept well-oiled so that levels of violence can be ratcheted up whenever necessary.

Incidents like the terrorist strike at the Pathankot air base in January 2016 and Pakistan’s proclivity to remain in denial even though hard evidence of the involvement of organs of the state is given to it, are exhausting Indian patience. A single miscalculation could lead to conflict between the two nuclear-armed neighbours.

The Pakistani deep state’s efforts to destabilise Afghanistan with a view to establishing a pliant regime are continuing. The ISI employs "strategic assets" like the Haqqani network to fight not only the Afghan National Security Forces (ANSF), but also to kill American soldiers, advisors and contractors.

Also read: In Indian 'spy' case, Pakistan made a fool of itself

For several years, the army and the ISI harboured Osama bin Laden and Mullah Omar – both fugitives from justice.

General Sher Mohammad Karimi, chief of staff of the Afghan army said during an interview with the BBC on July 3, 2013, that the war with Taliban would be over in weeks if Pakistan so wished. Even as it projects itself as a facilitator for reconciliation talks with the Taliban, Pakistan has been instrumental in wrecking the talks.

The Pakistan army plays a disproportionally large role in the nation’s polity. The army determines Pakistan’s national security threats and challenges and decides how to deal with them. Pakistan’s policy on Afghanistan and Jammu and Kashmir is guided by the army and the rapprochement process with India cannot proceed without its concurrence. The army directs and controls Pakistan’s nuclear weapons programme.

The civilian government has no role to play in deciding the doctrine, force structures, targeting policies and command and control. The army decides the annual defence expenditure and senior armed forces appointments – the civilian government of the day merely rubber stamps these decisions.

Under these circumstances, the logic for the continuing US support for the Pakistan army is fundamentally flawed. It emboldens the army to interfere in decision making well outside its domain, undermines civilian control over the military and, consequently, weakens Pakistan’s fledgling democracy.

US support for the Pakistan army defies credulity and finds no resonance in New Delhi. It is also a stumbling block for the further consolidation of the India-US strategic partnership.

It should be a national security and foreign policy objective for India to work towards reducing the salience of the Pakistan army and the ISI in the country’s polity. A carefully calibrated strategy should be evolved to realise this objective. Also, like North Korea, Pakistan is a de facto terrorist state, and, hence, an international pariah.

India should work with its strategic partners to get the United Nations Security Council to place an embargo on the sale of military equipment to the Pakistan armed forces. Simultaneously, covert operations in Pakistan must be resumed so as to bring India’s enemies to justice.

#General Raheel Sharif, #F-16s, #Pakistan Army, #USA
The views and opinions expressed in this article are those of the authors and do not necessarily reflect the official policy or position of DailyO.in or the India Today Group. The writers are solely responsible for any claims arising out of the contents of this article.