The SP-Congress alliance worked against the strategy as the BJP used it to start counter-polarisation.

As the counting of votes for Assembly elections are underway, it seems that the Bharatiya Janata Party (BJP) has swept the polls in Uttar Pradesh. The BJP under the leadership of Prime Minister Narendra Modi and party president Amit Shah is set to come to power in the Hindi heartland.

If early trends are anything to go by then it's clear that the faith of people of UP has only deepened in Prime Minister Modi over the years. Was it just Modi's charisma or did Akhilesh Yadav fail to gauge a deep sense of distrust against the government? Whatever be the reason, Akhilesh Yadav is set to be dethroned by yet another saffron surge.

Here are the reasons Akhilesh Yadav lost the battle in Uttar Pradesh: 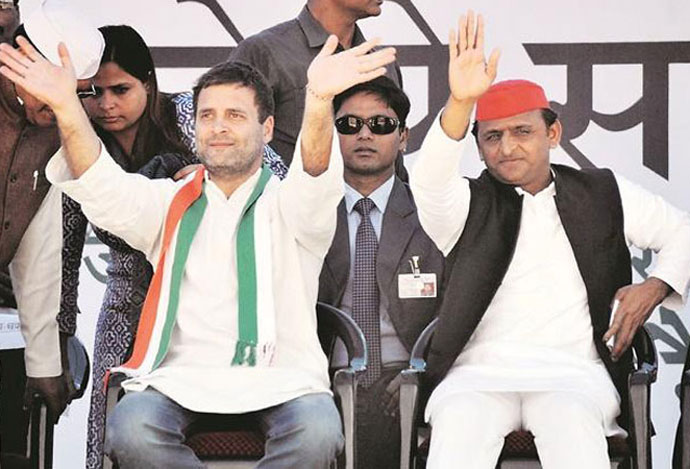 The SP-Congress alliance worked against the strategy as the BJP used it to start counter-polarisation.

Joining hands with Rahul Gandhi: Congress has lost almost every, barring a few, elections after 2014. Rahul Gandhi hasn't been able to devise any strategy to take on Prime Minister Modi and Amit Shah who seem to be, at least for now, invincible in Indian politics.

Akhilesh Yadav, instead of being confident, turned to Rahul Gandhi with the aim of consolidating Muslim votes, which would have otherwise got divided. It was Akhilesh Yadav's another political harakiri.

The alliance between Rahul Gandhi and Akhilesh Yadav worked against the strategy as BJP used it to start counter-polarisation. Noted journalist Rajdeep Sardesai, who covered the UP elections extensively, explained how the aggressive Yadav and minority support for the Akhilesh-Rahul combine only accelerated the counter-polarisation.

Speaking on possible polarisation after the alliance, he said: "As a result, a new Hindutva alliance is being cemented where upper caste interests are being aligned to the numerically large most-backward castes and even non-Jatav Dalit aspirations. Hindutva politics based on anti-Muslim propaganda and "hope" embodied in the Modi persona offer a deadly combination:  The UP voter may well be intoxicated by it this time."

Criticising demonetisation: Prime Minister Modi's move to demonetise old Rs 500 and Rs 1,000 currency notes may have caused great amount of inconvenience, however, one thing it did to the prime minister's image was that it re-established him as a leader who could take tough decisions with the larger interest of the nation in mind.

People also believed that it was a decision that made everyone stand in line, rich or poor, and it was taken in the interest of the country. And such was Modi's appeal that the masses were ready to support the demonetisation drive regardless of personal pain and economic slowdown.

However, political parties in Uttar Pradesh failed to sense the reality and kept criticising the prime minister's move. Modi used Akhilesh Yadav and Mayawati's criticism and termed them as the protector of corrupts. May be it was one of the reasons that Akhilesh Yadav faced the people's ire in Uttar Pradesh's historic elections.

The differences between Akhilesh Yadav and Shivpal Yadav reached to a level where latter threatened to float a new political party even before elections were over in the state. Insiders say that Shivpal Yadav and others from his camp were in fact working against the interest of Samajwadi Party. Akhilesh Yadav failed to unite party workers who were divided into two camps ahead of crucial elections. And even before he could realise the mistakes, Prime Minister Modi had captured the momentum.

Also read: Why Akhilesh Yadav may have paved the way for BJP to win UP polls

#Congress, #SP, #Uttar pradesh elections 2017, #Assembly elections Results 2017
The views and opinions expressed in this article are those of the authors and do not necessarily reflect the official policy or position of DailyO.in or the India Today Group. The writers are solely responsible for any claims arising out of the contents of this article.