What helped the BJP retain its hold on UP is the development work done by the government. What helped Smriti is her own time, labour and determination in Amethi.

All caste calculations now lie in the dustbin — because Uttar Pradesh has largely rejected caste politics and voted overwhelmingly in favour of Narendra Modi’s politics of development.

The BJP is now leading on 59 seats, including the contentious seat considered a 'Congress pocket borough', Amethi. The much touted Samajwadi Party (SP), Bahujan Samaj Party (BSP) and Rashtriya Lok Dal (RLD) combination that fought on 78 seats together is leading on just 19 seats.

In 2014, the BJP had won 71 seats from Uttar Pradesh. Though the BJP suffered a estimated loss of 12 seats in comparison to 2014, it is indeed an impressive show, given that the odds were hugely stacked against the party. 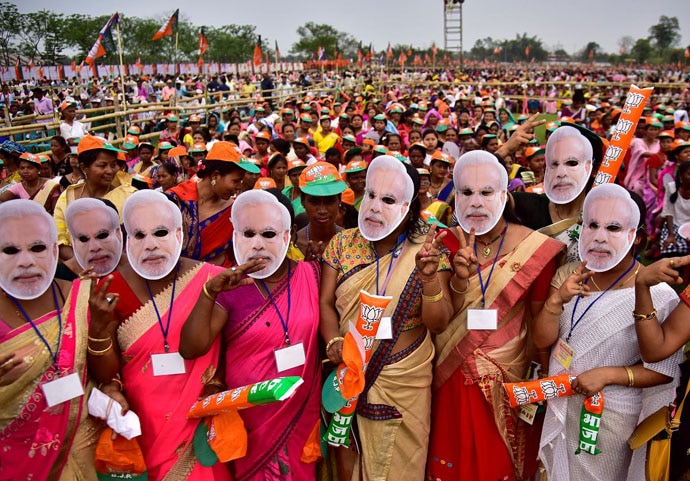 It's all about Modi: PM Modi's development work threw the SP-BSP caste calculations out of the window. (Source: Reuters)

Not only had the SP-BSP seized the narrative in the state, the entry of Priyanka Gandhi also briefly made it look like the BJP could find its problems mounting in the state.

With Mayawati’s BSP leading on 12 seats, and Akhilesh Yadav’s SP getting restricted to six seats, it now appears that while the SP votes got transferred to BSP, the opposite did not happen.

Several interesting battles were lined up in the state.

The most interesting was in Amethi — where BJP leader Smriti Irani is leading and Congress President Rahul Gandhi is trailing.

Gandhi, on his part, has accepted defeat.

To her credit, Irani was consistently campaigning in the constituency for the last five years.

The BJP, it needs to be remembered, had not won Amethi since 1998 when Sanjay Singh defeated Satish Sharma of the Congress to wrest the seat from the party. He was, in turn, defeated by Sonia Gandhi in 1999. She later vacated the seat for her son Rahul and contested from Raebareli instead.

In 2014, Irani lost to Rahul Gandhi — but not without giving him a tough fight. Gandhi won by a margin of 1.07 lakh votes over Irani. But in 2009, Gandhi had won the seat by a margin of over 3.70 lakh votes. Significantly, his absence from Amethi frequently raised questions, particularly from Smriti Irani who, despite her initial loss in the region, stayed put and invested time, parleys and hard work in bridge-building in Amethi. Today, her work has paid off.

What seems to have helped the BJP retain its overall hold on UP, even if with a jolt of 12 seats, is the development work done by the government. The benefits of the various schemes launched by the BJP government reached the proverbial last person in the state.

Scores of people got gas connections; they saw not just houses but even toilets being built.

Another factor that led to people in UP not buying the caste bait was that the benefits promised in Budget 2019-20 by the Narendra Modi government under the Pradhan Mantri Kisan Samman Nidhi scheme had begun reaching the bank accounts of farmers in March itself. The scheme promised an annual Rs 6000 payout to farmers in three equal instalments of Rs 2,000 each to all farmers cultivating up to two hectares (5 acres).

As the payments began to appear, interestingly, the caste equations also melted away.